Update 2:35 p.m.: The Capitol Police say the suspect has surrendered peacefully and is now in custody. Law enforcement officials are continuing to search the area in and around the truck and the area around the Library of Congress remains closed. Police believe the suspect was acting alone.

U.S. Capitol Police are investigating an “active bomb threat” outside the Library of Congress. The subject of interest is a man parked in a black Chevy pickup truck in front of the library. The suspect, who was broadcasting live on Facebook Live until the feed was cut (see below), claims there are four more bombs planted around the Capitol, in addition to the one he’s holding in his lap.

The suspect, broadcasting under the name Ray Roseberry, says he’s trying to get Joe Biden on the phone and is angry about the president’s actions in Afghanistan. He said Democrats are killing America. “You’re killing America, you’re making people want to leave America.”

“People’s tired, Joe. Just send somebody here to talk to me. I’ll tell you what they want. The first thing we want is airstrikes in Afghanistan. Kick that Taliban’s a** and keep them from killing people” he said. “I love this world. All I want to do is set this bomb down and go home.”

D.C. bomb threat suspect dares Biden to send someone to shoot him, saying that "decimals" will detonate the bomb in his lap. pic.twitter.com/9AuQ4yvtrw

The man at the Library of Congress claiming to have a bomb indicated in a FB live vid that he's angry about recent events in Afghanistan. pic.twitter.com/KHRuqdZCm6 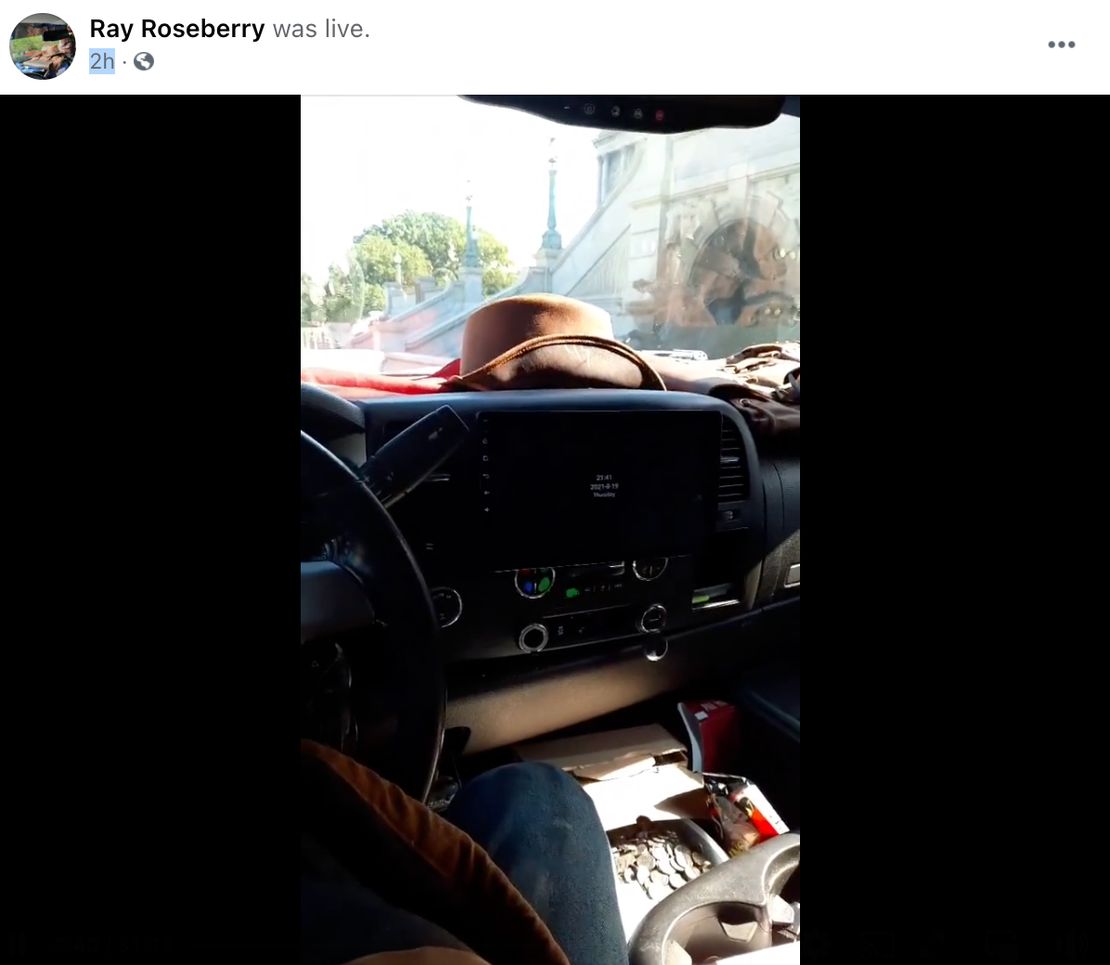 He said he has a bomb packed with ammonium nitrate and tannerite and is outfitted with speakers. He indicated that the bomb would be activated by “decimals” (decibels?). “That little blue light right there works off decimals,” he said, pointing to a canister in his lap that he claims contains enough explosives to blow up four city blocks.

“I’m not pulling the trigger on this car. There’s no way I can blow this up,” said Roseberry. “When the bullet hits this window, that’s when it goes off and it’s not my fault. Only you can by shooting a bullet through the window.”

He added, “You thought the South wasn’t coming,” and vowed that he’s ready to “die for the cause.”

“They’re cutting healthcare. I can’t even get shots for my back anymore.”

“I’m a patriot. I’ll die for this land… Patriots, it’s time. The revolution is on.”

He said he had lied to his wife and told her he was going fishing today. The truck appears to be filled with coins, which the suspect keeps referring to. A pile of dollar bills sits next to the truck. Roseberry claims he threw about $3000 from the vehicle.

I ain’t going nowhere, Joe, I want to go home by Sunday. I hope the American people don’t make a liar out of me.”

“I want to go home and see my wife. We’re living in a free country, Joe. The choice is yours.”

Here’s more audio from the broadcast.

The Capitol Police tweeted that they are responding to a “suspicious vehicle” and advised people to avoid the area.

This is an ongoing investigation.

We are monitoring this situation closely and will update this account as we get information we can release.

Thirty minutes later, the USCP updated the alert to say that they were dealing with an “active bomb threat investigation.”

MEDIA ALERT: This is an active bomb threat investigation. The staging area for journalists covering this situation is at Constitution and First Street, NW for your safety.

Please continue to avoid the area around the Library of Congress. pic.twitter.com/jTNVaBmVwR

Video shows roads in the vicinity blockaded and armored vehicles descending on the area.

UPDATE – Multiple buildings evacuated near the U.S. Capitol in D.C. amid reports of a bomb in a truck near the Library of Congress.pic.twitter.com/xrPmU6RnZb

People at the Cannon House Office building were told via text alert to relocate to the Longworth House Office Building. The Supreme Court building has been evacuated, as has the nearby RNC office. Congress is currently in recess. Area residents are also receiving text alerts warning them to avoid the area.

“Around 9:15 this morning, a man in a black pickup truck drove onto the sidewalk in front of the Library of Congress…we responded to a disturbance call,” said Manger. “The driver of the truck told the responding officer on the scene that he had a bomb and what appeared to be a detonator in the man’s hand. So we immediately evacuated nearby buildings.”

Manger said that law enforcement officials are in communication with the subject and negotiations are ongoing. Asked by a reporter whether he was a veteran of the war in Afghanistan, Manger said, “We don’t know what his motives are at this time. We don’t know a whole lot. We do have a possible name and identity of the subject.”