Twitter is determined to get itself in trouble it seems. While Big Tech claims to not be in the business of censorship, they continue to censor Republicans on a daily basis. Twitter’s new favorite target is Donald Trump. On Tuesday, Twitter put a warning over the president’s tweet about upholding law and order and hid the tweet from view. If you want to read it, you must click on their warning.

There will never be an “Autonomous Zone” in Washington, D.C., as long as I’m your President. If they try they will be met with serious force! 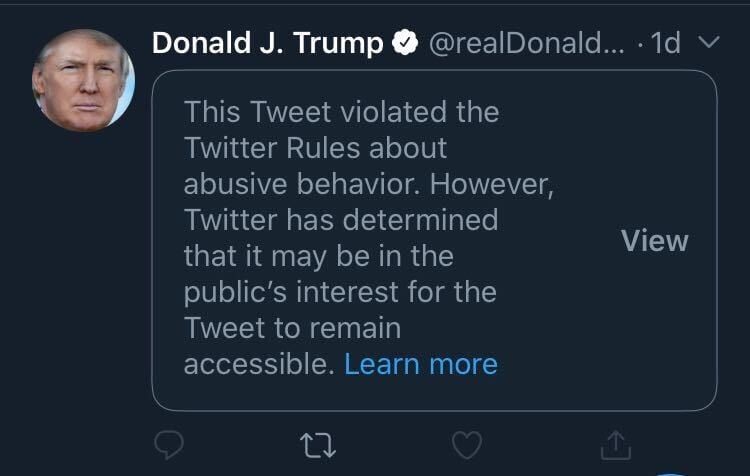 How can a tweet about upholding the law be “abusive”? Autonomous zones are not legal. Citizens are not allowed to set up pseudo-countries in the middle of American cities and ignore our laws and violate public safety. Using force to disperse such action is required by our laws. Twitter marking this tweet as “abusive behavior” is beyond the pale. It was probably the same people who decided to fact-check a joke meme the president tweeted.

But Twitter got what was coming to it and Parler, an alternative platform similar to Twitter, began trending at number one on the censor-happy Twitter. Thousands of people began announcing their new handles at Parler. Even some lawmakers got into it.

Will look better on Parler! https://t.co/LpVJDOH4wW

After Twitter banned meme-maker Carpe Donktum (probably for being too popular and having his memes retweeted by the president) other high-profile conservatives began jumping ship as well, saying they aren’t long for the Twittersphere.

Just got @parler_app. I’m assuming none of us are long for this site. Find me @JesseKellyDC. I’m amazing.

If you are on Twitter but not also on Parler, here are some of the voices you are missing;
1. General Flynn.
2. Katie Hopkins
3. Carl Benjamin
4. Tommy Robinson
5. Carpe Donktum

Join in the better conversation at Parler where speech is free.

But the alternative site won’t really take off until the president deletes his Twitter account and moves. With that one action, every media network would have to follow him and so would everyone else, including the left. And social media isn’t any fun in an echo chamber, so Parler can’t work properly unless everyone migrates. Maybe instead of regulating Twitter, the president could just make it irrelevant. That would be fun to watch. Set up your Parler account now just in case. (I’m @MeganFoxWriter on Parler).