Six Reasons Why Obama Would Have Botched the Coronavirus Response

According to a new POLITICO/Morning Consult poll released on Wednesday, a majority of registered voters believe former President Obama would do a better job at handling the coronavirus pandemic than President Trump.

According to the poll “52 percent of the survey’s 1,990 respondents said they believed that Obama would be a better leader than Trump during the ongoing pandemic, compared to the 38 percent who said they thought Trump is the better leader.” Considering the lengths that the mainstream media has gone to criticize Trump’s response to the coronavirus, even blaming him for the death of a man who drank poisonous fish tank cleaner because it had chloroquine phosphate in it, it’s almost shocking Trump does as well as 38 percent in the poll. Obama, however, received overwhelmingly glowing coverage during the H1N1 pandemic of 2009. The results of this poll are a reflection of a dishonest media that has tasked itself with trying to prevent Trump’s reelection in November through their biased coverage of the pandemic.

President Trump’s response to the coronavirus may not be perfect, no pandemic response can be but make no mistake about it, Obama would have seriously botched the coronavirus pandemic, and I can give you six solid reasons why.

6. Obama failed to restock the Strategic National Stockpile after H1N1

Obama’s failures during the H1N1 pandemic had consequences for the current coronavirus pandemic because in 2009 the Obama administration depleted the Strategic National Stockpile of N95 respirators and never replenished the stockpile during the remainder of his presidency.

According to the Los Angeles Times, “After the swine flu epidemic in 2009, a safety-equipment industry association and a federally sponsored task force both recommended that depleted supplies of N95 respirator masks […] be replenished by the stockpile.” The problem is that didn’t happen. According to Charles Johnson, president of the International Safety Equipment Association, about 100 million N95 respirator masks were used up during the swine flu pandemic of 2009-2010, but, he said was unaware of any “major effort to restore the stockpile to cover that drawdown.”

In fact, the Obama Administration ignored at least 3 government reports in which “federal officials predicted the United States would experience a critical lack of ventilators” during a global pandemic.

If Obama couldn’t be bothered to replenish the Strategic National Stockpile after depleting it in the first place and then ignoring multiple warnings about it, how exactly does that translate into “Obama would do a better job with the coronavirus”?

Barack Obama’s Department of Health and Human Services declared the H1N1 pandemic a “national health emergency” on April 29, 2009, but didn’t declare it a “national emergency” until October. That’s two months after the World Health Organization declared it a pandemic. A thousand Americans had already died due to the H1N1 virus at this point. It can’t be a coincidence that Obama finally declared H1N1 a national emergency just days before a congressional oversight panel slammed the Obama administration’s response to the pandemic as inadequate and incomplete. “Our early warning and detection systems were inadequate,” Rep. Yvette Clark, (D-NY) said of the government’s response. “Some key planning activities were incomplete; we didn’t have a good approach to provide health care under pandemic conditions; and levels of preparedness for pandemic influenza were unclear. Unfortunately, our failure to develop these systems, activities and policies cost us during the response.”

The H1N1 outbreak originated in Mexico. Despite calls from members of Congress to do so, the Obama administration refused to restrict travel with Mexico or close the border. “Closing our nation’s borders is not merited here,” said Obama’s DHS Secretary Janet Napolitano when a national health emergency was declared. She argued that closing the border or U.S. ports would have “no impact or very little” in stopping or slowing the spread of the virus.

Trump proved this theory wrong when he took the bold step of banning travel from China back in January. He got criticized for it, but a month later WHO experts conceded that it worked and it saved lives. While countries like Italy and Iran were experiencing catastrophic outbreaks, the United States was not. Even Joe Biden has flip-flopped on this, he now supports the travel ban with China after previously calling it “xenophobic.”

As for the coronavirus, there’s no doubt in my mind that Obama would not have banned travel with China or waited much, much longer to do so.

In addition to being ill-prepared, the Obama administration failed to achieve its vaccine production goals. The New York Times reported in January 2010 that the Obama administration “predicted in early summer [2009] that it would have 160 million vaccine doses by late October,” but that “it ended up with less than 30 million,” leading to a public outcry and congressional investigations.

This failure undoubtedly cost lives. A study by Purdue University scholars published on October 15, 2009 (before Obama declared the national emergency) determined that the H1N1 vaccine would arrive “too late to help most Americans who will be infected during this flu season.” The study determined that the CDC’s planned vaccination campaign would “likely not have a large effect on the total number of people ultimately infected by the pandemic H1N1 influenza virus.”

2. Obama cut funding to the NIH

Remember how Democrats like Joe Biden falsely claimed that Trump cut funding to CDC and the NIH? Guess who actually did cut funding for the NIH? Yup, Barack Obama. Analysis from the Cato Institute found that “Real NIH spending soared from the mid‐​1990s to 2011. It was then cut under President Obama but has rebounded under President Trump. Real CDC spending soared from around 1990 to 2010 but has been roughly flat since then.” 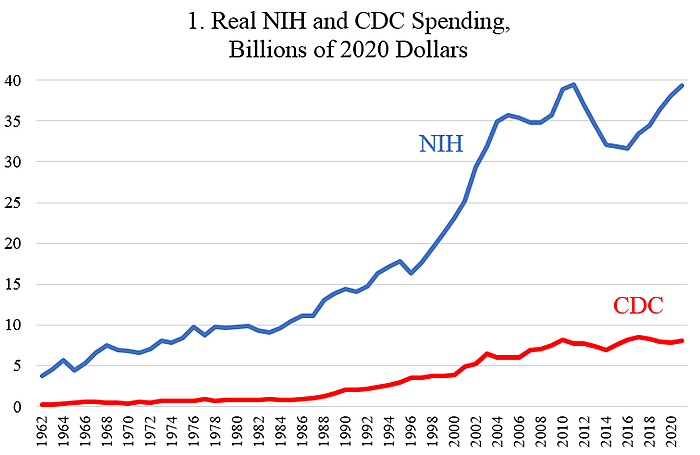 (Graph courtesy of the Cato Institute)

As for the CDC, Trump has been criticized for requesting cuts to the CDC, but, the Obama administration did as well.:

Some of the cuts sought by Barack Obama “specifically took aim at the CDC’s preparedness initiatives.” The Wall Street Journal reported in 2012 that “President Obama’s 2012 budget calls for paring some of that spending. Funding for a public health emergency preparedness program run by the Centers for Disease Control and Prevention was cut by about $72 million below fiscal 2010 levels in the budget proposal.”

1. Obama actually did dissolve the White House pandemic office in 2009

In fact, there was no dedicated anti-pandemic unit at the White House National Security Council until one was created in the final months of the Obama administration—seven years after the H1N1 pandemic started, and two years after the Ebola epidemic. Barack Obama’s response to the H1N1 pandemic was slow, and plagued by vaccine shortages. His response to the 2014 Ebola outbreak was also plagued with problems  —which apparently convinced him to re-open the office two years later.

Matt Margolis is the author of Trumping Obama: How President Trump Saved Us From Barack Obama’s Legacy and the bestselling book The Worst President in History: The Legacy of Barack Obama. You can follow Matt on Twitter @MattMargolis

Matt Margolis is the author of Airborne: How The Liberal Media Weaponized The Coronavirus Against Donald Trump, and the bestselling book The Worst President in History: The Legacy of Barack Obama, and The Scandalous Presidency of Barack Obama. You can follow Matt on GETTR, Truth Social, Twitter, Facebook, MeWe, Gab, and Rumble. News tips, praise, hate mail, and media inquiries can be sent to [email protected].
Read more by Matt Margolis
SHOW COMMENTS