Have you seen Joe Biden’s latest ad? The one with the Beastie Boys song that was released when Joe was a mere 51 years young? It features a Michigan nightclub owner who claims Trump is killing his business and only Biden can save it:

My first thought when I saw this ad was: Bro, you live in Ann Arbor. Which is in Michigan. A Democrat-led city in a Democrat-led state. Under Gretchen Whitmer’s iron fist, you Michiganders are subject to the strictest lockdown in the country. Yet somehow your plight is the fault of the Republicans? Even a blind pig can do better than that.

But it’s even more dishonest than I thought. With Biden, it usually is. Collin Anderson, Washington Free Beacon:

The struggling Michigan bar owner at the center of a Joe Biden campaign ad is actually a wealthy tech investor whose startup was seeded by a large family inheritance.

The ad, which the Biden campaign released Thursday, identifies Michigan entrepreneur Joe Malcoun as co-owner of the Blind Pig, a bar and live music venue in Ann Arbor, Mich…

According to a 2018 interview with local NBC affiliate Click on Detroit, Malcoun became a well-known “angel investor” in local tech startups after receiving a large inheritance from his wife’s late grandfather roughly a decade ago. He described the inheritance as “almost like winning the lottery…”

So, millionaire tech investor Joe Malcoun is blaming Trump because Whitmer’s lockdown is ruining the small business he runs as a hobby. That seems a bit dishonest, no matter who you’re voting for or why.

And didn’t Biden say he would lock down the whole country if “the scientists” said so? Let me just google it real quick… yep, he certainly did say that. 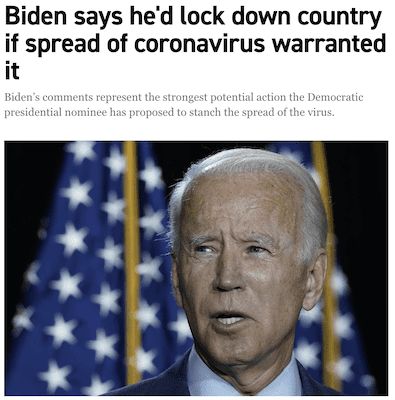 As badly as small businesses are suffering now, Biden is promising to make it even worse.

So if Biden wins and he locks down the country — and don’t ask me how he plans to do that, it’s a campaign promise — what will the millionaire owner of the Blind Pig say when he has to shut it down? Will the Biden administration film a follow-up ad with him? Will the Beastie Boys help? Or will they all just shrug and say, “Hey… we won, didn’t we?”

It’s not about what makes sense. It’s not about thinking these things through. It’s not about separating fact from fiction. It’s about joining a team and sticking with it, no matter what. Once you plant your flag, Trump or Biden, you must defend it against all foes, no matter how stupid you look.

By the way, if you want to ask Malcoun what he was thinking, you won’t be able to reach him at his Twitter account: 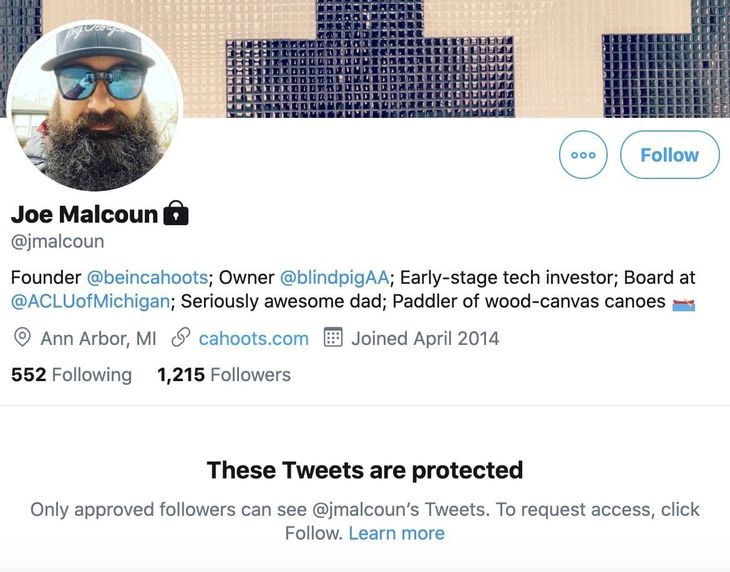 Sunlight really is the best disinfectant.

Although I have to admit, it’s funny to watch 77-year-old Biden bounding up those steps (“See, folks? He can still climb stairs!”) to the sweet strains of the Beastie Boys. I’ve loved those knuckleheads ever since Licensed to Ill, but I’m not sure they thought through the implications when they agreed to license this song to the Biden campaign. Just consider the lyrics:

Yeah, depicting Joe Biden as youthful and vigorous is definitely a mirage. And if he wins and he keeps his campaign promises, Joe Malcoun and a lot of other small business owners will be sabotaged.

Update: It’s probably just a coincidence, but in the 24 hours since I posted this, the Biden campaign has removed that ad from their YouTube page. They sure are fond of getting rid of evidence, aren’t they?

And I wonder how much the campaign spent to license all that music? “Sabotage,” indeed.