No, Amy Coney Barrett Doesn't Belong to a Catholic Group That Inspired 'The Handmaid's Tale'

What would Americans do without our stalwart, truth-telling heroes in the press? Those diligent fact-checkers make sure we get the most accurate information possible so we can stay informed. And as we head toward the bitterest, most contentious election since the last one, with a vacant Supreme Court seat to make it even more interesting, we need the straight facts now more than ever. That’s why, when I saw Newsweek magazine promoting this story about possible Supreme Court nominee Amy Coney Barrett, I had to know more: 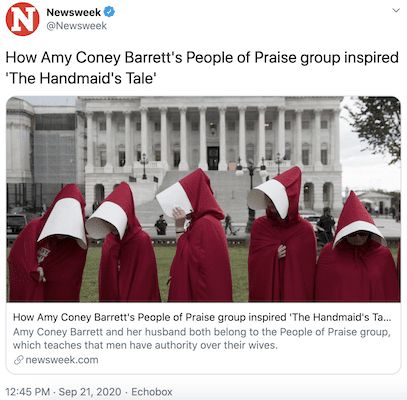 Wow. What a scoop! But is it true? Khaleda Rahman, Newsweek:

Barrett, a devout Catholic, and her husband both belong to the People of Praise group, current and former members have said, according to The New York Times…

Atwood herself has indicated that the group’s existence motivated her to write The Handmaid’s Tale, set in the fictional Gilead, where women’s bodies are governed and treated as the property of the state under a theocratic regime.

Or at least that’s what her Newsweek story said yesterday. You can still read the original version at MSN. But when you read the story at Newsweek today, the headline has been changed: “How Charismatic Catholic Groups Like Amy Coney Barrett’s People of Praise Inspired ‘The Handmaid’s Tale.'” And all the way at the bottom of the story, there’s this minor correction (emphasis mine):

Correction: This article’s headline originally stated that People of Praise inspired ‘The Handmaid’s Tale’. The book’s author, Margaret Atwood, has never specifically mentioned the group as being the inspiration for her work. A New Yorker profile of the author from 2017 mentions a newspaper clipping as part of her research for the book of a different charismatic Catholic group, People of Hope. Newsweek regrets the error.

Whoops! People of Hope, People of Praise, whatever.

So the entire story is wrong, but instead of retracting it, they stealth-edited it and added a “correction” at the bottom. Such is journalism in 2020.

Once again, it’s not about facts and logic and all that other nonsense. It’s about what feels right. Newsweek couldn’t pass up a chance to paint ACB as a religious zealot and inspire cosplayers in handmaid costumes to picket the Supreme Court again. It was too good to check. So what if it’s complete bull$#!+? They’re not journalists, they’re liberal activists. Newsweek is now just another blog, but without the stringent editorial standards.

I’m sure the libs will try to do a #FakeButAccurate here: “Okay, fine, so it wasn’t her Catholic group that inspired my favorite Hulu show. But close enough!” Now they just need to convince everybody that Amy Coney Barrett is a submissive tradwife who’s in thrall to her controlling husband. Sure, that makes sense: “Barrett wanted to major in women’s studies and make something of her life, but instead her husband forced her to go to law school. Mr. Barrett only lets Amy out of the house to shop, pick up his dry cleaning, and be a circuit court judge. She could’ve become a strong, independent woman if he hadn’t kept her chained up in the courtroom.”

Besides which, The Handmaid’s Tale depicts a society where the powerful husbands of barren women keep fertile women as slaves to bear their children. Barrett has given birth to five kids, and then adopted two more. She doesn’t need a handmaiden. She doesn’t need anybody’s help being a mom. Maybe that’s why they’re afraid of her.

Amy Coney Barrett has worked hard in a male-dominated field, raised a family, and now might be nominated to the Supreme Court. And if she is, the left will demonize her any way they can. You thought those losers went insane over the Brett Kavanaugh nomination? Take that recipe and throw in some misogyny and anti-Catholic bigotry, just for starters. The left is desperate for abortion on demand and they see her as a threat, so why should they care about destroying the life of a working mother?

Strap in, folks. This is gonna get really ugly, really fast.

Editor’s Note: Want to support PJ Media so we can expose and fight the Left’s radical plans for the Supreme Court? They will stop at nothing, so your support for conservative journalism is more important than ever. Join PJ Media VIP and use the promo code SCOTUS to get 25% off your VIP membership.
Share
Tweet