There may be a movie’s worth of drama going on inside the Travis County (Texas) District Attorney’s Office. Jose Garza won that office on a platform of, basically, letting criminals go free and indicting cops. Voters should pay more attention to what local office-seekers are saying. Sometimes they actually mean it, and Garza did.

If Austin had a dashboard, all the lights would be blinking red. Austin, the capital of Texas and the heart and seat of Travis County, has suffered at least 47 homicides in 2021. Violent crime is spiking. Police officers are leaving in droves, leaving the streets much less defended from crime than before. That wasn’t Garza’s doing, Austin Mayor Steve Adler led the defunding of APD in August 2020 (and has proceeded to gaslight the city that he didn’t), but that together with Garza’s pro-release priorities are putting convicted felons back on the streets, where they are emboldened, while police officers face hostility from the Austin government, forced critical race theory indoctrination (more on that in due time), and the demoralizing prospect of facing an indictment from Garza, even if their cases have already been adjudicated.

Related: Why Would Anyone Want to Live in Austin Anymore After What the Travis County DA Just Did?

One source told me that every cop has noticed Garza’s retroactive prosecutions and is weighing them in every decision they make from how they handle incidents to whether or not to stick with APD. They are aware that the majority of the city council doesn’t have their back, and Garza appears intent on sticking a knife in it.

Take the case of APD officer Gregory Gentry. His 2019 case was investigated by the previous Travis County DA and he was not indicted.

Garza comes into office in January 2021, reopens that case, and less than a month into his tenure indicts Gentry and another cop who was also absolved in the same incident.

There’s the case of Assistant DA Trudy Strassburger, who is actively hunting for attorneys who want to prosecute cops. Not enhance public safety by keeping gangbangers and drug dealers away from your children. She wants to find lawyers who intend to go after cops.

There’s a shooting on Sixth Street on a June weekend. The shooters get away that night but are eventually caught by police in Killeen — there are three of them. Garza’s office lets two of the three suspects go, while eventually holding the third and charging him with murder, but the whole county is wondering why he just let the other two go when they were evidently involved in the shooting on the city’s main grownup playground. People the world over visit Austin to crawl its legendarily seedy but music-friendly bars. They won’t if they have reason to think they’ll get shot.

If you want to kill the live music capital’s cash cow, make it easy for criminals to kill and maim tourists while you prioritize prosecuting cops.

After Garza let those two possible accessories go, with no hint that they’re cooperating witnesses and no charges to hold over them to keep them cooperating, his office indicted Daniel Perry. Perry is the veteran and Uber driver who shot and killed a BLM protester last year. That protester was carrying a rifle and his group illegally blocked an Austin intersection late at night, trapping Perry, who was just trying to make a few bucks driving for Uber, in his car. Texas castle law extends to one’s car, as every concealed carry permit holder is aware. Perry is a concealed carry permit holder and could reasonably have feared for his life, given the fact that his car was surrounded by protesters, one of the ones closest to him was carrying a rifle, and such incidents had resulted in shootings of drivers elsewhere during the latter half of 2020.

But Garza has indicted Perry for murder. Perry was cooperative the night of the shooting, spoke with police, and was allowed to leave the scene. The most reasonable interpretation of his actions that night is that he acted in self-defense.

All of this brings us up to the present. Garza is facing scuttlebutt that he’s over-charging Perry and handling criminal justice cases with deference to criminals whenever possible. His secret order circulated through police and public safety channels, and we reported it here. That order makes it all too easy to keep on releasing accused criminals on the order of the Assistant DA — the one who wants to hire lawyers to go after cops.

If you’re seeing bias in all this, you’re not alone.

Today, out of the blue, Garza drops the charges against Officer Gentry, citing some new and exculpatory evidence — which seems to have been in the DA’s files from the tenure of the previous DA.

That would be the DA who looked at Gentry’s case and declined to indict.

But Garza indicted him about three weeks into the job. It seemed hasty at the time. 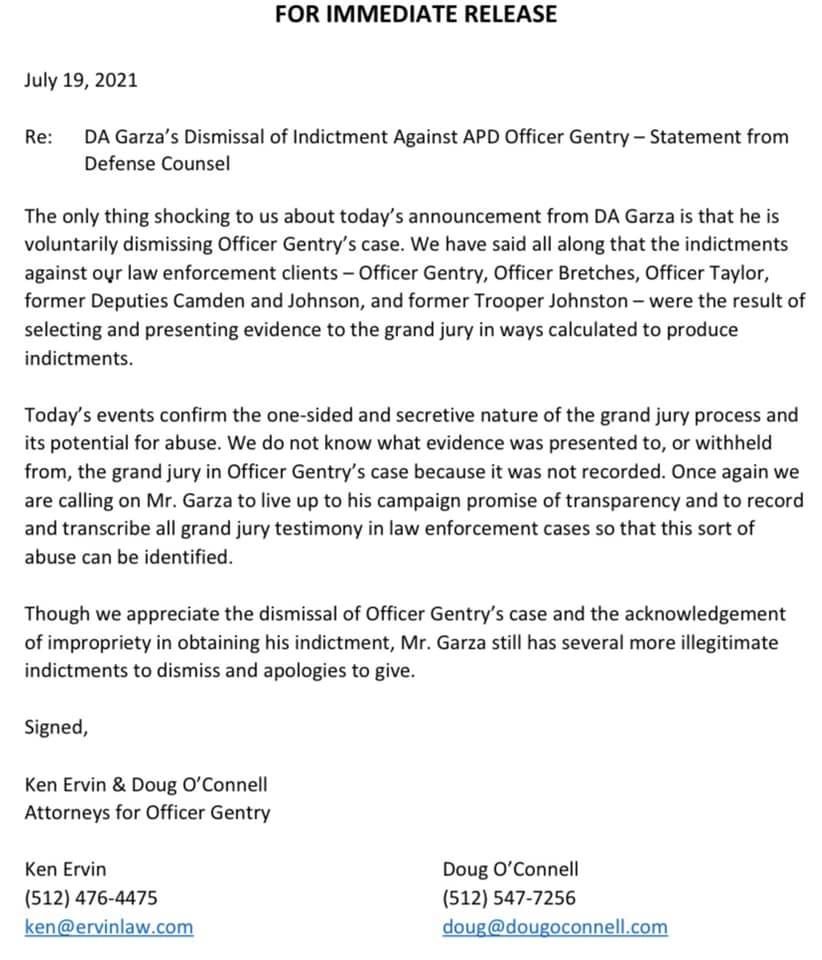 NEW: Travis DA Jose Garza is dropping charges against one of the first Austin officers he indicted, saying that prosecutors have become aware of evidence favorable to him. “I offer my sincere apologies,” Garza said.
Statement: pic.twitter.com/ErCwwsaWa4

Meanwhile, Garza has also announced that he has filled out his team of lawyers to review what it describes as officer misconduct.

Question: Did they respond to Strassburger’s email or were they hired by some other path?

One other note. Garza’s office and the Austin Police Department say they’re working in cooperation to curb gun crimes. But there’s a case out there in which Garza’s leniency on arrestees appears to include leniency on gun crimes too, with domestic violence factoring in as well.