VIDEO: Watch the Music Video That Inspired the Cuban Uprising

When the people of Cuba took to the streets by the thousands in protest over the past weekend, the mainstream media in our county fired up the spin machine. It’s about COVID and shortages, they said. The New York Times did its Stalin impression.

They were all lying.

This video is now credited with helping inspire the uprising. It says nothing at all about COVID. It says everything about the human desire to be free and Cuba’s desire to throw off the shackles of communist tyranny. If you don’t speak Spanish, make sure to watch it with the captions on.

The video’s visual opening sets the stage. That’s America’s first president, George Washington, revealed in the opening frames as a Cuban peso bearing an image of historical hero Jose Marti burns away to show the portrait of Washington on the dollar, reversed so it works visually with Marti.

The exiled and dissident Cuban artists are saying theirs is an American revolution by tying their hero — a revolutionary leader who fought against Spain — to ours.

Who are the artists? Rolling Stone has details.

The Cuban artists Yotuel Romero, Descemer Bueno, Maykel Osorbo, Eliécer “el Funky” Márquez, and the reggaeton duo Gente de Zona collaborated on the rap track and released it in February, after which it amassed more than six million views on YouTube. The lyrics take direct aim at Cuba’s communist government: “No more lies. My people ask for freedom, not more doctrines. We no longer shout, ‘Motherland or death,’ but ‘homeland and life,’ and we begin to build what we dreamed, what they destroyed with their hands.” The title “Patria Y Vida” (“homeland and life”) is a bitter play on “patria o muerte” (“homeland or death”), a popular slogan associated with the rise of the communist leader Fidel Castro in the late Fifties.

Later in the video, an image of Cuba’s communist flag burns away to reveal this flag. 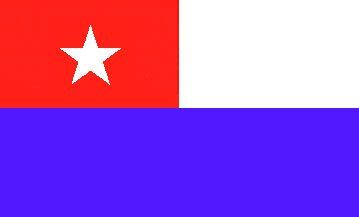 Looking similar to the flags of Chile (1817) and Texas (1836), which date to roughly the same period of revolutions and rebellions, this is the Cespedes flag of the 1868 “Grito de Yara” uprising. It’s another callback to Cuba’s past before communism when its people fought for freedom and independence.

Grito de Yara, declaration of Cuban independence made in the eastern region of Yara (10 October 1868). Efforts at reform having failed, Carlos Manuel Céspedes led the organization of eastern Cuban planters in a conspiracy against continued Spanish rule in Cuba. On 10 October 1868, at his plantation of La Demajagua, near Bayamo, he proclaimed Cuban independence, universal suffrage, and an end to slavery. Freeing his thirty slaves, who then joined his rebel army, his “grito de Yara” thus launched the Ten Years’ War (1868–1878). It became the rallying cry for the rapid expansion of the rebellion across eastern Cuba.

That’s five years after the United States abolished slavery and three years after it actually ended, on Juneteenth in 1865.

The Texas Revolution was tied explicitly to the American Revolution by founder and leader Stephen F. Austin. It was seen at the time by many as transformative, which it turned out to be, for the political fate of North America. Now this Cuban revolution is tied to the origins of the United States as well.

What are the racist critical race theory proponents to make of real history as it happens? How should they view non-white Cubans seeing inspiration in white Americans the CRT proponents deride as oppressors — while the same Cubans seek to throw off real oppressors who are not white, but are evil?

While Romero and Gente de Zona now live in Miami, Osorbo and El Funky still reside on the island and took a risk by openly rebuking the country’s leadership. The two rappers recorded their verses in secret and sent them back to the other artists, who got the track mixed in Miami. “Involving them was key since they’re rappers and people who have struggled against the dictatorship even while being in Cuba — as we say in Cuba, ‘tienen los huevos bien puesto’ [they have balls],” Delgado says. Malcolm adds, “These are artists who are willing to give their life for their country.”