The new book Forget the Alamo is causing a stir in Texas. Lavished with friendly coverage in media nationwide and in particular at the San Antonio Express-News, the book makes sensational claims and also covers ground that’s been known to historians and Alamo scholars for decades as if it’s a grand new revelation. It wasn’t written by historians or peer-reviewed before publication. But that hasn’t mattered to its public relations and marketing. The San Antonio Express-News uses the book’s claims to bash the Alamo and its defenders nearly every day. This prompted me to ask whether the Alamo City hates the Alamo last week.

A business reporter at the Houston Chronicle is one of the book’s three authors. Both the Express-News and the Chronicle are owned by Hearst. It’s possible that there’s a financial as well as an ideological incentive for the two papers to act in concert, even if the San Antonio paper ends up sacrificing the Alamo along the way. Hearst owns the San Francisco Chronicle, Esquire, and Cosmopolitan among its far-flung but decidedly left-wing media empire.

Forget the Alamo makes numerous claims of fact, many of which I’ve vetted across several pieces. It claims slavery was the main cause of the Texas Revolution, but it was clearly not. It claims the Alamo defenders were not brave because they were surrounded, which is illogical. It builds a white supremacy narrative out of thin air.

To that point, the book claims that Lorenzo de Zavala, the Mexican treasury officer and statesman who defected to Texas after Santa Anna established his dictatorship, faced widespread racism in revolutionary Texas and he struggled to deal with it. They cite a specific source to back this claim. They also claim that Texian soldiers threatened to rape Mexican camp followers after the Battle of San Jacinto, again citing a specific source. In a third factual claim, Forget the Alamo asserts that Henderson Yoakum, one of the first serious historians of Texas and the author of History of Texas in 1855, flat out said that Mexico’s abolition of slavery was a cause of the Texas Revolution. Yoakum is obviously the source for this claim, which would be important if true. Yoakum wrote History of Texas within living memory of the revolution, when slavery was legal and many of the key figures including Sam Houston were still alive, and a decade before the Civil War settled the slavery issue once and for all. (In the United States. It still exists elsewhere including communist China.)

How do these three factual claims stand up? Do the authors’ claims agree with the sources they cite? This is an important test of their competence and perhaps even their honesty as writers. Remember, one of the authors is currently a business reporter at Texas’ largest newspaper. His name is Chris Tomlinson. On Facebook he was recently challenged to debate the book’s claims, but he disrespectfully declined. The authors have also reportedly pulled out of an Austin event at which they would have faced tough questioning. After the Bullock Museum event was canceled, the authors went on TV to claim they had been silenced.

Copano Bay Press is well known across Texas for its dedication to resurrecting and printing important books, maps, and documents from and about Texas history. They know their stuff. They discover it, they typeset it, and they print it, every day.

One map in their offerings, for instance, is Henderson Yoakum’s map of the Battle of San Jacinto. They also offer a fine print of the Texas Declaration of Independence and Andrew Jackson Houston’s drawing of the Alamo compound. The second son of Sam Houston and named for President Andrew Jackson, Houston’s political ally, the younger Houston drew that map as a composite from sources dating back to January 1836 — before the famous battle. 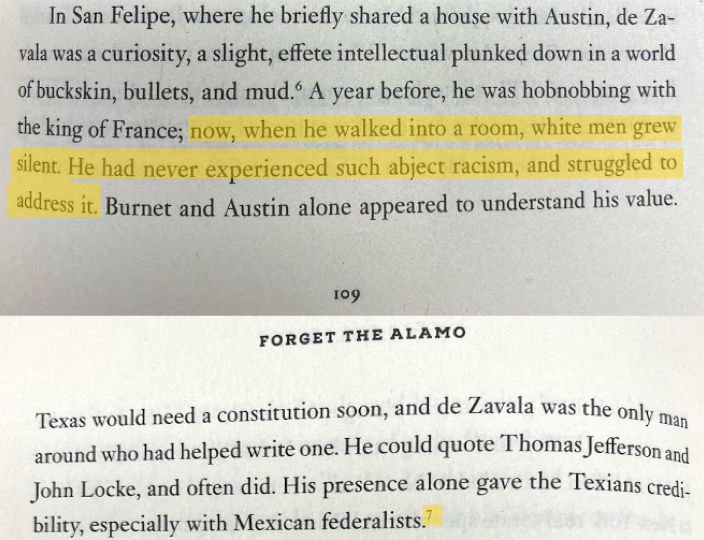 That superscript indicates a footnote. Pusateri looked up the source the authors claim to have used. The source is a 1932 article by W.S. Cleaves published in the Southwestern Historical Quarterly. This is what it says. 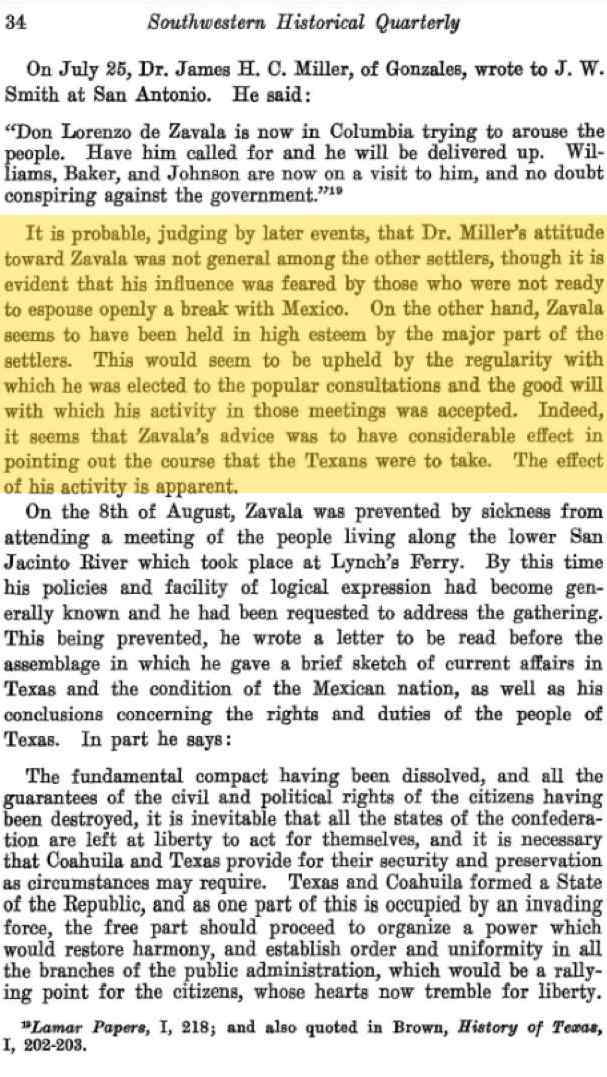 One man had an issue with de Zavala, but most people “held him in high regard,” according to the source the authors cite. Visiting Virginia attorney William Fairfax Gray was present at the Washington Indepenence Convention in February 1836. In his diary he called de Zavala “the most interesting man in Texas” and though he kept meticulous records, Texas history professor and author Dr. Stephen Hardin notes that nowhere did Gray record any hostility on the part of any of the delegates toward de Zavala.

Texas later elected de Zavala provisional vice president of the Republic of Texas. That seems not to square too well with the authors’ contention.

Ruling: Forget the Alamo is wrong.

Claim 2: Texian soldiers threatened to rape Mexican women who followed the army’s camp after the Battle of San Jacinto.

Here’s the claim from the book. 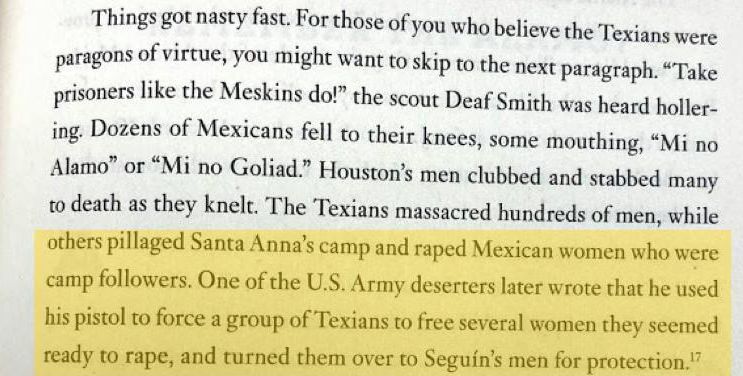 The authors cite a 2004 article in the Southwestern Historical Quarterly written by Bill and Marjorie Walraven, titled “The Sabine Chute: The U.S. Army and the Texas Revolution.”

What does it say? Pusateri looked it up and scanned it. Here is the entire page with the relevant passage highlighted and in context. 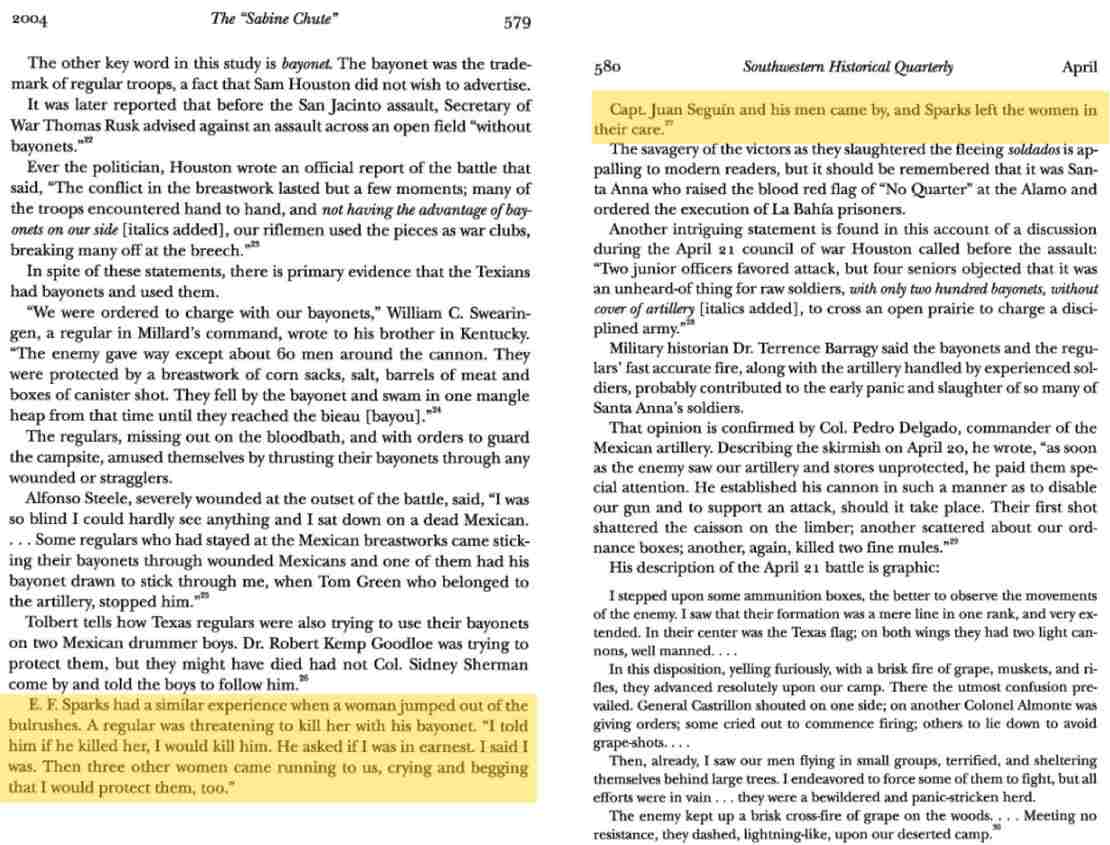 Sparks’ account is well-known. As you can see, the source the authors cite makes no rape claim whatsoever. Sparks also was not a deserter and the original article doesn’t say he was. Pusateri says he has read every first-hand account of the battle, and found no claims of rape.

Claim 3: Texas historian Henderson Yoakum wrote in his authoritative history that Mexico’s abolition of slavery was a cause of the Texas Revolution.

Here is Forget the Alamo’s claim. 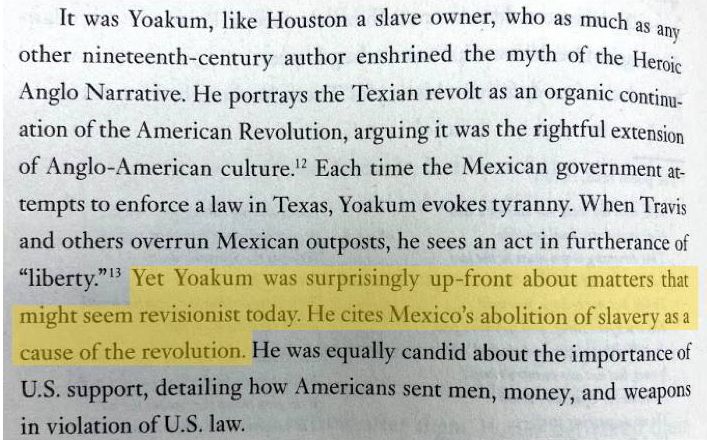 But according to Pusateri who cites Yoakum’s book, Yoakum did not cite Mexico’s abolition of slavery as a cause of the revolution.

Here is Yoakum’s relevant mention of slavery from his 1855 History of Texas.

Perhaps they figured no one would check their footnotes. With regard to their media colleagues, they have been right. No mainstream media outlet including the very informed San Antonio Express-News has fact-checked any of the book’s claims. That newspaper continues bashing the Alamo almost daily, and in so doing is spreading the disinformation Forget the Alamo contains.

One last note. As you can see above, the Forget the Alamo authors frequently cite articles in the Southwestern Historical Quarterly. So they must regard that publication as authoritative. A 1985 article in that publication, which I’ve cited previously, appears to have escaped their research. That article is a collection of some of Stephen F. Austin’s letters. Here are two relevant quotes that the Forget the Alamo authors evidently missed.

The men who are fighting in Texas, are the farmers, the settlers-they are not land speculators-Is it just to condemn them because persons living else where have speculated in Texas lands?-also some of your city folks seem to think that the Texas war is to establish negro slavery-This is as incorrect as the other idea-slavery has nothing to do with the causes, or the objects of this war.

The truth is we are fighting in Texas, for the cause of america­ & american principles-we are contending against Military usurpation and priestcraft-it is a war of barbarism & religious intolerance waged by Santana, & the clergy of Mexico, against civilization & liberty-Are we to be abandoned by our native countrymen because we are so near, and because we are purely American in birth, education, principles & everything?

Austin also chides the media of the day for getting the story wrong. Information war never changes.