Has the weaponized IRS of the Obama era returned?

Or have politically motivated hackers obtained and disclosed the private information of American citizens and handed that information out to effect political policy changes?

The leak of several Americans’ personal and private tax information suggests one of these is true. Either way, it’s disturbing and points to the death knell of privacy even when prison is a real possibility for violating it. These are the most disturbing possibilities and questions in the wake of the disclosure of private IRS information to ProPublica.

Is the Lois Lerner weaponized IRS back under Biden?

Despite Barack Obama’s claim that his presidency was scandal-free, it wasn’t, and the weaponization of the IRS against tea party and other conservative groups was a scandal of historic proportions. The media never treated the Lois Lerner scandal with the appropriate horror it deserved. The fact of the matter is that the IRS blocked, delayed, disapproved, and slow-rolled approval of groups that sought to educate Americans on public policy, which surely affected policy debates and even the outcome of the 2012 presidential election to some degree. It stifled Americans’ ability to organize and speak truth to the powerful freely and without interference from government. It was a blatant violation of the First Amendment.

Joe Biden was vice president under Obama. The IRS commissioner under Obama-Biden, John Koskinen, has publicly endorsed Biden’s tax policy. That would usually mean little to nothing, but given his role in stonewalling the investigations into IRS misdeeds under Obama and Biden, it should raise a red flag. Biden never paid for or even criticized the Lerner scandal. He wants to greatly increase the power of the IRS now. The ProPublica disclosure should end that possibility, but will it? Republicans who raise any questions will be accused by the media of “pouncing,” but will their private information also be illegally made public?

It’s possible a Biden supporter obtained and leaked the private tax information of the individuals ProPublica is now targeting with its current report and the reports it says it will file in the future. If so, this portends the rise of an IRS that will be even more weaponized and partisan than it was under Obama — without restraint, and without Congress passing any new laws. Any American, not just billionaires, might find themselves subject to disclosure of their private information just for publicly opposing any aspect of the Biden administration — the border, critical race theory, any policy or controversy at all. Recall that the Pentagon has already targeted Tucker Carlson for criticizing Biden’s military policies. Recall that in Loudon County, Virginia, local public school officials have targeted parents for dissenting from critical race theory indoctrination. Neither of those cases involve billionaires. There’s clearly little if any restraint on Democrats to use and abuse their power to target Americans now.

Have a problem with Hunter Biden’s ties to China or his racist texts? Don’t like Biden’s cancellation of motherhood in his budget proposal? If a Biden supporter leaked the ProPublica information and is not caught and prosecuted to the fullest extent of the law, you may expect to have your tax returns and your personal information disclosed as punishment. It’s the ultimate form of doxing, coming from the federal agency that has the most private financial information about all Americans. This is beyond sinister.

Were the materials hacked and handed to ProPublica?

This possibility is also sinister. If a private individual or group was able to hack the IRS and obtain personal information on Americans, this is a deeply serious security breach and one or more federal crimes. It may have been conducted by overseas actors based in China, Russia, or another competitor/rival state beyond the FBI’s reach. It may have been state-sanctioned. This isn’t WikiLeaks, the sometimes-whistle-blowing-on-government activity. The IRS information is private and personal and supposedly guarded by extremely clear and strict disclosure laws. ProPublica owes the country several things, including full disclosure of where it obtained the information, an apology to Americans for using it, and a clear and unambiguous promise to never use any of it again or any similar information. It must also hand over the information it does have to the federal authorities. True, the feds cannot be trusted to safeguard it if it was hacked, but they may be able to forensically determine where it came from and how it was obtained, which can lead to the arrest and prosecution of those involved.

I’m not a fan of cancel culture or social media’s power over what Americans are allowed to discuss in the digital town square. Social media’s power has become un-American. Twitter and Facebook have suspended and banned James O’Keefe and his Project Veritas for using undercover reporting, which is not hacked and which is used by nearly every media outlet in the country in some way or another. Facebook has throttled us for factual reporting what it didn’t like. But they have not suspended or banned ProPublica for using clearly illegally-obtained personal and private information of dozens of Americans who are not accused of doing anything illegal. Why? That question is rhetorical; we know why. Social media’s bias now extends to abetting targeted reporting that benefits from probable criminal activity.

Is the IRS disclosure part of a policy pattern?

Suppose the IRS information was hacked. This would be the third major hack since Biden’s inauguration of industries or people the Democrats have publicly targeted on policy. The first was the Colonial Pipeline, which carries gasoline and jet fuel. Biden and the Democrats have openly targeted pipelines themselves, most notoriously with Biden’s decision to cancel the Keystone XL pipeline. Michigan Gov. Gretchen Whitmer is targeting a pipeline in her state. New York’s Democrats have targeted pipelines in their state. Democrats are targeting energy pipelines generally, then it just so happens a major pipeline was hacked. Following that, the JBS hack, in which one of the world’s largest beef and chicken suppliers was targeted. Democrats have targeted the beef industry; their Green New Deal would force Americans to give up the vast majority of the beef we consume. Now we have a third major hack, if that’s what this is, targeting billionaires with the clear aim of enacting policy to make them pay more taxes. Sen. Elizabeth Warren wasted no time in making this explicit point. 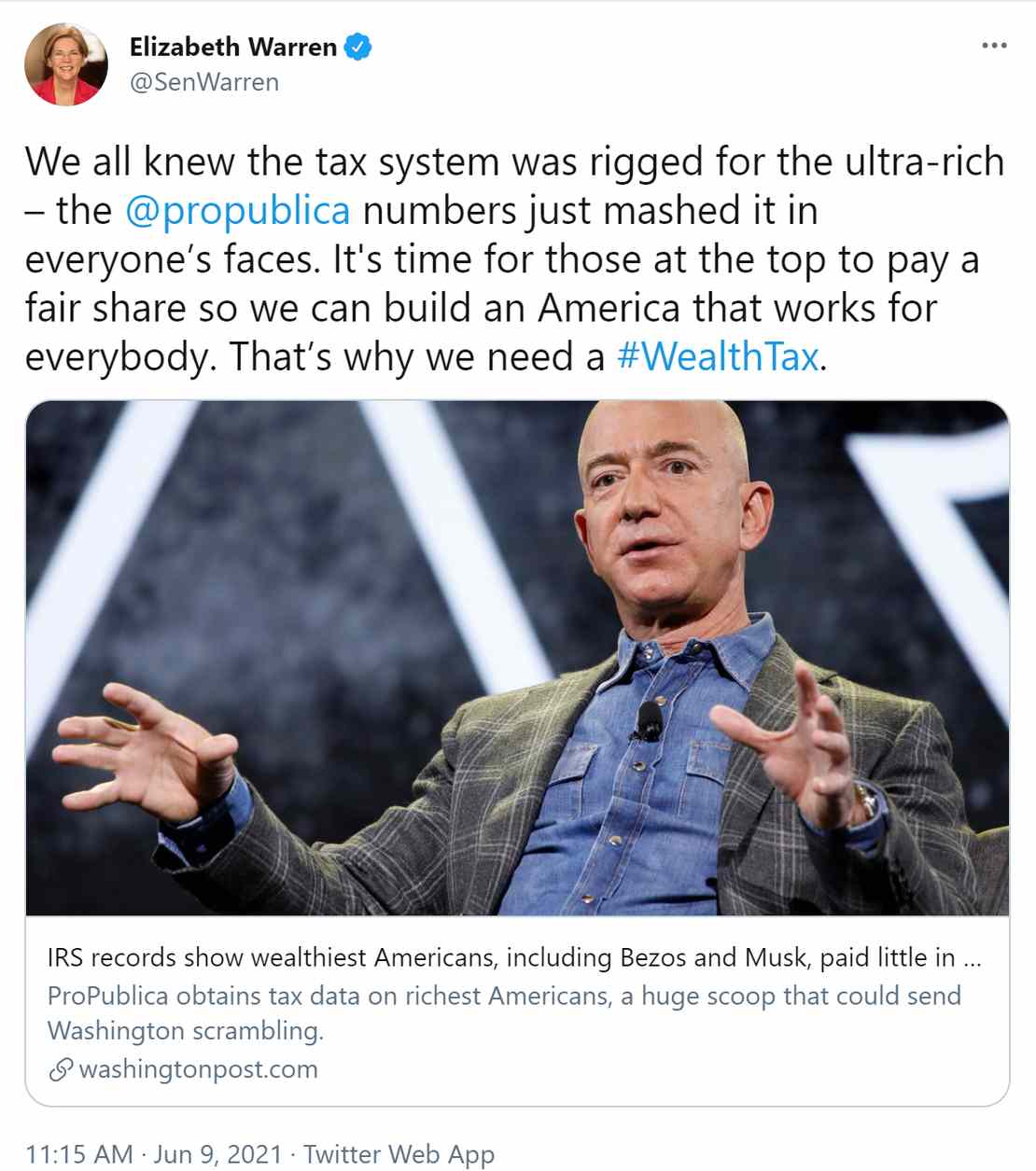 Warren hopes to benefit via policy from the doxing of American citizens, which was done illegally either by government officials or unknown (to the media and public, anyway) hackers. Warren has no qualms about using crimes to benefit her party and enhance its and her power. Does Biden agree?

Are the hackers essentially Democrat operatives or ideologically aligned with Biden on policy? Are they just creating chaos to undermine Americans’ confidence generally? Are they international actors with the backing or tacit approval of hostile governments?

The outlines of this case are deeply disturbing. Either hackers or government officials are doxing Americans to push policy outcomes. Social media is taking no action, demonstrating at least collusion with the crimes at the heart of the disclosure. ProPublica has revealed its lack of journalistic ethics and its intent to continue using the information to form reports intended to push tax policy.

I’d suggest Congress should hold hearings to get to the bottom of this, but the Democrats control Congress and they stand to benefit from the IRS disclosure. The likelihood that congressional hearings go anywhere productive is very low as long as Democrats hold the reins. Their media allies will not push for meaningful hearings or investigations. We may not see any meaningful investigation until after the 2022 midterm elections are settled. By then it may be too late.

Unless the disclosure is investigated by competent law enforcement (the FBI is partisan now too) and those responsible are prosecuted harshly, we may be stuck in a disclosure-based police state. The likelihood that this will boomerang around on more Democrats than the targeted billionaires should provide little comfort. Any American could be targeted merely for speaking up — which is our natural and constitutionally protected right.

Bryan Preston is the author of Hubble's Revelations: The Amazing Time Machine and Its Most Important Discoveries. He's a writer, producer, veteran, author, and Texan.
Read more by Bryan Preston
Tags: JOE BIDEN