Why Is Texas in Danger of Losing Power Again?

The weather was mild. Texas was not in the depths of a historic freeze as it was back in February when parts of the Lone Star State were colder than parts of Alaska and people were snowboarding down an Austin highway.

The weather was fine Tuesday. But here was ERCOT with a dire warning.

Alert: Due to a combination of high gen outages typical in April & higher-than-forecasted demand caused by a stalled cold front over TX, ERCOT may enter emergency conditions. We do not expect customer outages. Declaring an emergency would allow us to access additional resources.

What in the name of natural gas flaring is going on? Let’s look at the U.S. Energy Information Agency’s power output data. 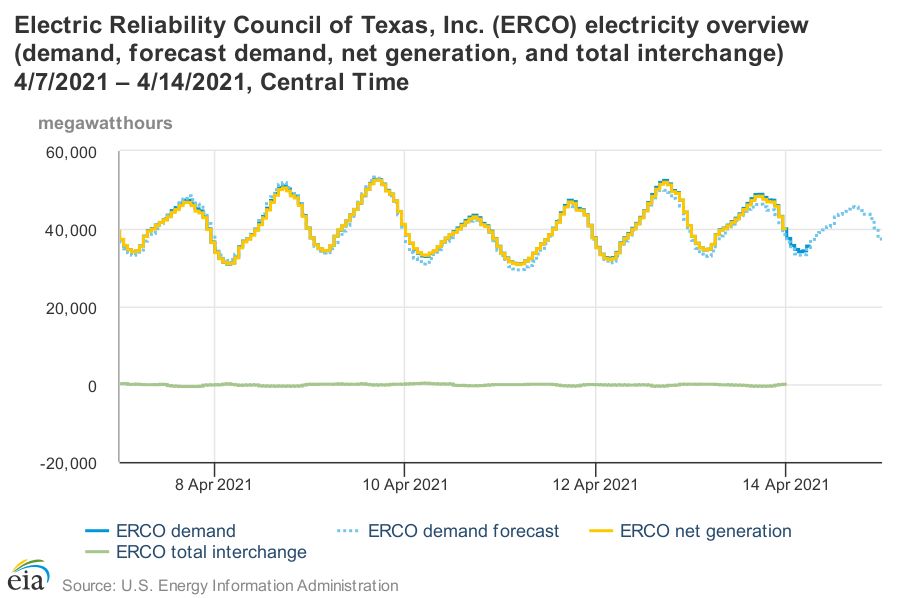 Demand is peaking at about 50,000 megawatts. Here’s supply, with energy sources separated. 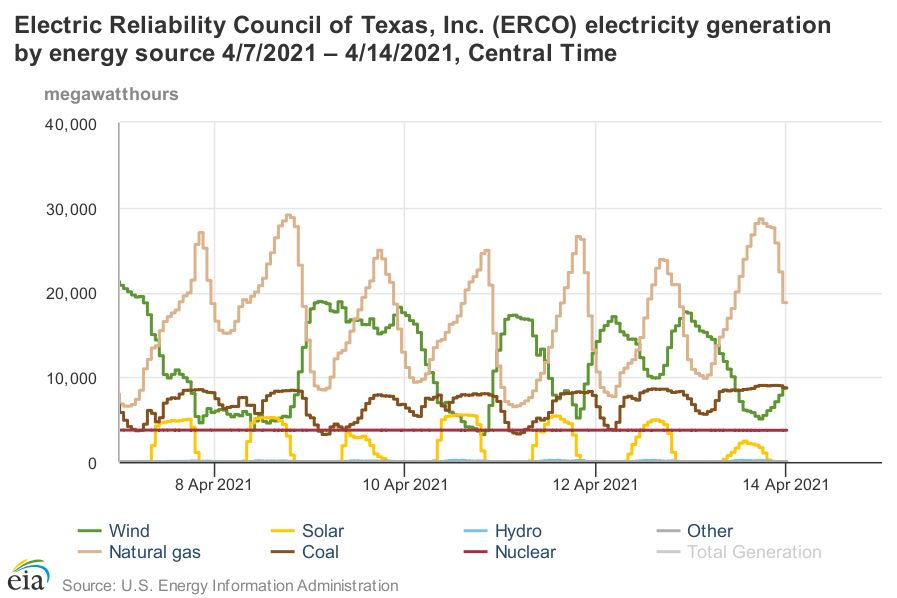 Supply should be just about meeting demand, but not reliably. That’s a problem.

Texas has far more capacity than is currently being used.

The word is, some natural gas and coal plants are offline for maintenance, some of which is due to the historic cold snap back in February. This is normally a very temperate time of year, a good time to perform needed repairs, upgrades, and the like.

But we have a problem that’s relatively new. As “renewables” (which require extensive mining and the use of toxic chemicals) grew in use in Texas over the past decade or so, reliable old coal plants were taken offline. This has reduced the reliability of the Texas grid.

Renewables are having a problem generating power in Texas’ current mild weather, according to Forbes.

I reached out to a source with deep knowledge of the Texas energy industry. He was succinct: “This is the new normal, I’m afraid, if we bring on too much renewable.”

No blue skies, no wind, no “renewable” power. There is as of yet no fix. Natural gas and coal plants can be throttled up or down to meet demand. But you cannot throttle the sun or produce more wind.

Well, unless you’re Bill Gates. The mind behind Windows Vista has the hair-brained and counterproductive idea to use dust to dim the sun. What’s that supposed to do to solar energy generation? A dimmed sun would mean we would need more heat for our homes in winter, not less.

Gates should read up on his history, specifically the year 536 AD.

The doomed year kicked off a devastating series of events, starting with a volcanic eruption that spewed so much ash into the air that the resulting temperature change led to mass crop failures and widespread starvation.

It gets worse: according to National Geographic, there were two volcanoes that erupted in a short time, with 536 being the first. Another research team traced a volcanic eruption to 539 or 540 and blamed El Salvador’s now-inactive Ilopango volcano for piling onto the misery of the years that followed, particularly for the Maya, who suffered massively in the wake of the double whammy.

People were still struggling in 542, and that’s when the bubonic plague decided to take advantage of an already weakened world population. That all led to a collapse of the world’s economic systems, and more than just a bad year or two — it wasn’t until 575 that things started looking a little better.

Gates’ idea is the stuff of supervillains. Thankfully the Swedes are pulling the plug.

As for ERCOT, well, here we are. It used to be common sense that you wanted reliable, economical sources of energy that you could control — not that would end up controlling you. The green revolution is turning that sound thinking on its head. Texas will be building up about 10,000 megawatts of natural gas reserve power in the next few years, and is smartly spreading that around the state to reduce the likelihood of one storm or disaster taking it all offline. It would be wise to add in some nuclear power too. Nuclear proved to be the most reliable energy source Texas had during the freeze. The green revolution despises nuclear, though, and despite its clear unreasonableness, Big Green tends to win because it has the media and Big Tech wind at its back.