Circuit Attorney Kimberly Gardner has filed charges against Mark and Patricia McCloskey. The couple displayed a handgun and a rifle as protesters entered private property and shouted at them during a protest of the city’s mayor in late June. But read on, as there’s a twist.

Patricia and Mark McCloskey were seen pointing guns at protesters who were marching on Portland Place heading to St. Louis Mayor Lyda Krewson’s home on June 28. The protesters were calling for Krewson to resign. Krewson had read the names and addresses of demonstrators calling for police reform during a Facebook Live video.

“It is illegal to wave weapons in a threatening matter at those participating in nonviolent protest, and while we are fortunate this situation did not escalate into deadly force, this type of conduct is unacceptable in St. Louis,” Circuit Attorney Kim Gardner said in a statement. “We must protect the right to peacefully protest, and any attempt to chill it through intimidation will not be tolerated.”

How “peaceful” this or many other recent protests have been lately is up for debate. Protests all over the country have gone from peaceful to violent in a snap. Protesters had turned into rioters not far from where the McCloskeys live earlier in June, and murdered retired police captain David Dorn. Drivers on random city streets have found themselves surrounded and threatened by flash mobs, and in Provo, Utah, a protester shot a man who was simply trying to drive through.

The protesters, in this case, were on private property. According to the McCloskeys, they were behaving in a threatening manner and Missouri has a broad Castle Doctrine allowing for the armed defense of life and private property without a duty to retreat. The McCloskeys were at their home, having dinner outside when the protesters broke a gate and entered their street, which is on private property. In a video of the incident, the McCloskeys can both be seen waving the firearms around and they point the guns at the protesters during the confrontation. It’s the latter that has resulted in the “flourishing” charge. This is described in Missouri state law as:

(4) Exhibits, in the presence of one or more persons, any weapon readily capable of lethal use in an angry or threatening manner;

It’s a Class D felony that can include prison time if convicted. But Castle Doctrine may come into play.

In the video of the confrontation, the protesters can be heard shouting expletives at the McCloskeys, including calling Patricia McCloskey vile sexist insults. One protester threatens to forcibly take the gun from her.

“I thought within seconds we were going to be overrun. That… they’d be in the house, they’d be setting fires, they’d be killing us and that would be the end of things,” Mark McCloskey said on Trump’s campaign program Making the Case.

“The so-called peaceful protest kinda ended when they smashed through the gate into my neighborhood and poured into my front yard,” he continued.

Given the direction many protests have turned over the past six weeks, nothing in Mark McCloskey’s statement is out of bounds. Protests have turned deadly. None of the protesters who were there that day have been charged with trespassing, or anything else. The George Soros-backed Democrat Gardner has previously released dozens of protesters/rioters arrested during protests in late May/early June, putting them back on the streets for more rioting.

Sen. Josh Hawley (R-Mo.) has called for the U.S. Justice Department to open up a civil rights investigation in the McCloskeys’ case, to look into Gardner and possible abuse of power in charging the couple.

“There is no question under Missouri law that the McCloskeys had the right to own and use their firearms to protect themselves from threatened violence, and that any criminal prosecution for these actions is legally unsound,” Hawley wrote. “The only possible motivation for the investigation, then, is a politically motivated attempt to punish this family for exercising their Second Amendment rights.”

Mo. Gov. Mike Parsons said last week that he was considering pardoning the McCloskeys if they faced charges. Under orders from Gardner, police confiscated at least one of the McCloskeys’ guns last week.

In announcing the charges, Garner published the following letter. 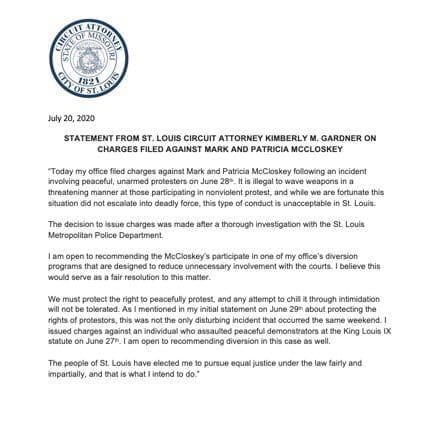 Gardner simply never mentions the Second Amendment or the state’s Castle Doctrine, both of which are relevant.

Also relevant: The pistol Patricia McCloskey is seen holding in the video may not be real.

(Former McCloskey defense attorney Al) Watkins told reporters the pistol Patricia McCloskey used was only a prop from a federal trial that the couple used in a case. Both of them are attorneys.

A source familiar with the investigation told 5 On Your Side that police did not find any ammunition at the McCloskeys’ home and the rifle was not loaded when they seized it.

If it’s not a real gun, it’s no more a weapon than a small club. If the rifle was never loaded, then the McCloskeys were bluffing the protesters at the most.

If one “gun” was a prop and the other wasn’t loaded, neither was capable of meeting the definition of flourishing as described in Missouri state law above. Neither was “readily capable of lethal use.”

Surely the prosecutors know the difference between a real gun and a prop…?

Within hours of the ruling, Missouri Attorney General Eric Schmitt filed a brief seeking to dismiss Gardner’s charges against the McCloskeys on the grounds that their Second Amendment rights are being violated.

“The right to keep and bear arms is given the highest level of protection in our constitution and our laws, including the Castle Doctrine, which provides broad rights to Missourians who are protecting their property and lives from those who wish to do them harm,” Schmitt said in a prepared statement provided to Fox News.

“Despite this, Circuit Attorney Gardner filed suit against the McCloskeys, who, according to published reports, were defending their property and safety. As Missouri’s Chief law enforcement officer, I won’t stand by while Missouri law is being ignored,” Schmitt said.