(Not) Shocking: It Turns Out that Protest Organizers and Protesters Can Get Coronavirus Too

At least four organizers of recent protests in South Carolina have tested positive for coronavirus, prompting one of the main organizers to urge others to get tested.

Several protesters at the marches in downtown Columbia — in addition to similar events in Charleston and Greenville — have tested positive for the coronavirus, according to organizer Lawrence Nathaniel.

“We are asking you please go get tested immediately,” Nathaniel said Sunday on Facebook.

Nathaniel’s previous political work includes organizing for the Democrats’ Tom Steyer and Bernie Sanders campaigns according to his Facebook page.

He is now re-thinking protest strategy. His group was set to hold a statue-related rally but now that’s off.

“It’s time that we must step up our game. What are we doing to step up our game? We’re canceling all our protests,” Nathaniel said. That includes an event that was scheduled for next Saturday, dubbed the “Take Down the Statue” protest.

Fascinating. Nathaniel is one better than the 1,000 so-called health care experts who prioritized protesting over public health (and at the same time wanted to shut down other First Amendment-protected activities such as attending church or President Trump’s rally).

Reason notes how difficult health care experts have made the past few months in the name of flattening the coronavirus curve, only to toss all that out when the protests started.

Many people all over the country were prevented from properly mourning lost loved ones because policymakers and health officials limited public funerals to just 10 people.

For months, public health officials urged people to stay inside and avoid gathering in large groups; at their behest, governments closed American businesses, discouraged non-essential travel, and demanded that we resist the basic human instinct to seek out companionship, all because COVID-19 could hurt us even if we were being careful, even if we were going to a funeral rather than a nightclub.

All of us were asked to suffer a great deal of second-order misery for the greater good, and many of us complied with these orders because we were told that failing to slow the spread of COVID-19 would be far worse than whatever economic impact we would suffer as a result of bringing life to a complete standstill.

And suffer we did. More than 40 million Americans lost their jobs. Americans who never once thought of having to rely on food banks found themselves in lines for miles so they could feed their families. Millions may face eviction or foreclosure before long. Pastors were sanctioned for holding drive-in church services where there was no danger of virus spread.

Authorities even jailed Texas salon owner Shelly Luther when she reopened her business while taking due precautions. Dads couldn’t even take their kids to the park in some states without risking a run-in with the law. Remember the arrest of the lone paddleboarder in California? Ridiculous. Arbitrary. The experts supported all that and gave no evident thought to the obvious and devastating economic and sociological side effects.

But along come the large street protests, and the same experts who persuaded governors and mayors to confine Americans to house arrest for months set a record for setting double standards by supporting the protests despite the obvious potential for COVID spread.  The predictable result of that is millions reject their hypocritical and often self-contradictory medical advice now.

It’s a natural reaction when you feel like you’ve been mistreated or misled. They played politics with all our health and they ignored the side effects of lockdown. The protests themselves are at least in part one of those side effects.

Now. For another topic. I couldn’t think of a good transition but I wanted to point out another epidemic that ought to be discussed today, Father’s Day.

While researching this post, I looked at some of protest organizer Lawrence Nathaniel’s Facebook posts and ran across an important one. While his politics and mine are very far apart, we agree 100 percent on this. 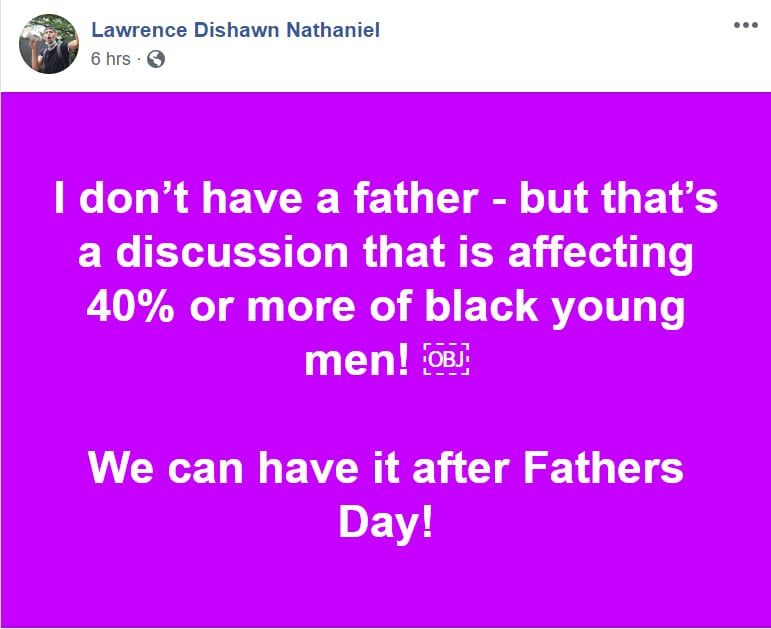 The lack of active and engaged loving fathers in the black community is a true pandemic. As Nathaniel says, it affects 40% or more of young black men. That is a crisis. It’s feeding into our current crisis. How many of these very angry young protesters lack strong and supportive fathers? How much of their rage comes from miseducation on one hand, and missing out on important sources of love and direction in their childhoods on the other hand?

This did not happen naturally or in a vacuum. The left in our culture has relentlessly assaulted the family and especially fatherhood for several decades. We’re reaping the effects of that now. Not just in these protests, that’s just a part of it.

My heart goes out to this sincere young man and the millions of others who have to deal with this devastating gap in their lives.