This incident happened at the state capitol in Texas on Wednesday. It was posted at 11:22 p.m. but the incident clearly happened hours earlier.

In it, we see a black Department of Public Safety officer walking across the capitol grounds alone. He is not speaking to or bothering anyone.

A gang of masked, white antifa spot him. They surround him, insult him and attack him. There are no other officers in sight. The officer evidently does not react or speak to them in any way, but does keep hold of the bag or shirt the antifa attempt to take from him.

At the 43-second mark, the person capturing the video walks back in the vicinity of the officer and calls him the n-word.

At one point, someone in the crowd or the person running the camera yells, “He’s shooting!” and they quickly scatter. But they do not sound as if they are actually in fear; it’s more like they’re trying to scare others around them into stampeding. That fails.

No shots are fired and the antifa blend back into the crowd.

This move is in keeping with the undercover video Megan Fox posted earlier, regarding antifa training. They are trained to blend in as much as they can, and avoid being photographed while they instigate violence.

Here are a few screenshots of them, including one before he gets his mask in place.

Just in case the FBI decides to look for them. 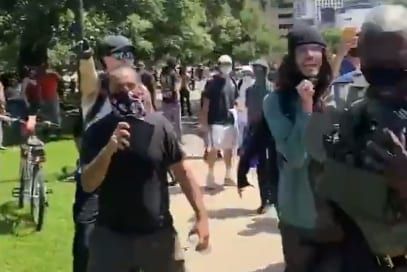 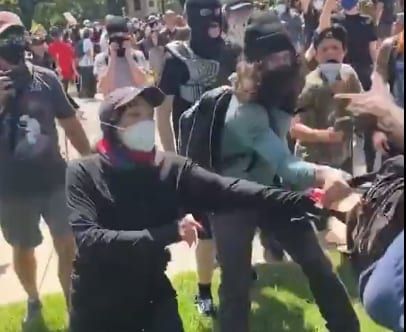 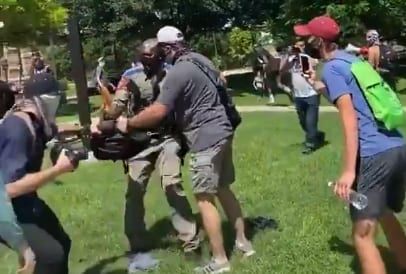