Do Most Americans Really Support the Riots and Burning the Police Precinct? Newsweek Says Yes!

Newsweek still exists and is flashing a poll claiming that a majority of Americans believe the burning of the Minneapolis police precinct was justified in response to the killing of George Floyd. Here’s the headline:

This would be horrifying if it’s true. Do a majority of Americans really think that it’s justified to go and burn down a whole taxpayer-funded police precinct to protest the death of a man at the hands of police?

The brief Newsweek story does not link to the poll, for some reason. Apply the “I’m thinking” emoji here. The story does include this.

It asked respondents if they thought the actions taken by protesters, including the burning of the precinct building, was fully justified, partially justified or not at all justified.

Wait a second. Did “protesters” burn that precinct, or did agitators and rioters do that?

Right after it happened, local officials blamed the latter which helped establish the narrative that there is a difference between legitimate protesters and those who are causing violence. This difference has become a key part of the American understanding of and response to the riots.

But according to Newsweek’s own text, only 17% really believe everything that has happened has been justified — and even those 17% may have been confused by the conflation of protesters and rioters/terrorists. This wording lacks important nuance. What does the poll actually say?

As I noted, Newsweek doesn’t link directly to it, leaving it to readers to just trust the journalist who wrote it — which a discerning reader never does.

Here’s the poll. When it comes to anything the mainstream media says, do not trust — just verify. Or in most cases, debunk.

What does the poll actually say?

Here is a screenshot taken directly from the poll.

Screenshot of the Monmouth Poll Newsweek failed to link.

So Newsweek is not alone in shady behavior. Monmouth does not leave respondents any room to sort out protesters from rioters despite the national conversation which has made that distinction. Given these choices and the setup, many respondents will go ahead and say the actions taken by “protesters” are “partially justified” while they do not support the burning of that police precinct at all. Respondents may believe a question down the line will ask about the riots more clearly. If so, Monmouth will leave them disappointed because this poll never does that. It conflates peaceful protest with rioters and antifa thugs, which is dangerous for everyone in the long run.

The very same poll does contain some good news (and bad news) for police on other questions. Even after this hellish week, a strong majority of Americans believe their local police are doing a good job.

Notice that “very dissatisfied” sit at just 5%. The polls’ margin of error is 3.5%. “Very dissatisfied,” which are the people you see virtue-signaling to de-fund the police, are those people. They’re so marginal in their beliefs that they literally sit just barely outside the actual margin of error. But they’re all over Twitter! Most of them are either wealthy enough to afford their own private armed security, or they’re criminals themselves. Or they just don’t think before following whatever is trending.

Make of the media influence on these two questions what you will. 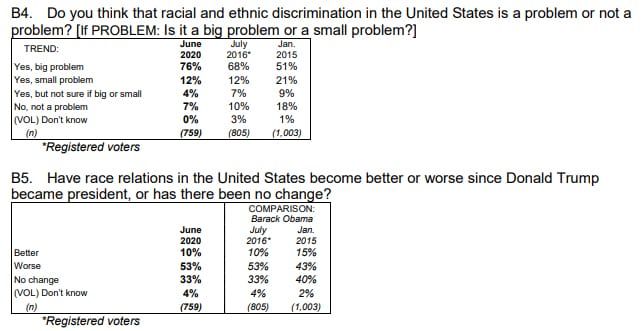 The poll did ask for respondents’ opinions of President Trump’s job performance. It’s 42% now, compared with 46% back in March. The nation has been through one of its worst periods in recent memory during that time, with the pandemic response causing tens of millions to lose their jobs, and China threatening war with everyone. Media jawboning against Trump, which is relentless and unfair nearly all the time, has only moved the needle about four points, which is just barely outside the margin of error. It may not in fact have moved the needle at all.

Oh, I forgot to mention one other thing. This is a poll of registered voters, not likely voters. Such polls tend to disfavor Republicans. This poll does not ask about the likelihood a respondent will vote, or their enthusiasm for voting for a particular candidate. If you feel the need to apply the “I’m thinking” emoji again, you’re not alone.

One other thing. Monmouth began this poll on May 28 — the day the precinct burned — and ended it on June 1. The riots and violence, now including the murders of black and other police officers, and the wanton destruction of people’s livelihoods, have continued since then. Might opinion have shifted as our cities burned? Probably. This poll won’t tell you about that because they cut off the polling period.

The distinction between protesters and rioters is very important, as the pollsters surely know but chose not to gauge. Americans support protests but despise terrorism.

In 2017, the United States Department of Homeland Security labeled antifa a terrorist group. Antifa has been spotted numerous times instigating riots and violence as the justified George Floyd protests devolved into unjustified domestic terrorism. I know, in the midst of the riots, the FBI went out of its way to declare that it doesn’t see antifa. Attorney General Barr just conducted a press conference in which he strongly disagreed.

The FBI also didn’t see antifa’s growing organizational capabilities over the past few years while it was busy framing Mike Flynn and pursued the bogus Russia nonsense.

The FBI has its priorities. They’re just wrong. Same goes for the pollsters and Newsweek, who have prioritized push-polling over detecting actual opinion.