"Well-Deserved, But He Must Also Earn It"

Why yes, one of those things is not like the other!

Reminiscent of last year’s defense that Obama had executive experience before he had, you know, executive experience, because he was the titular head of a presidential campaign, Noel Sheppard of Newsbusters spots two ex-Clintonistas clashing on whether or not President Obama’s Nobel was “well-deserved”:

Quite comically, Brazile was as serious as the Nobel committee (video embedded below the fold with partial transcript):

GEORGE STEPHANOPOULOS, HOST: Another Friday, another shocker. Everyone’s got an opinion. Let me bring the Round Table in on all this. I am joined as always by George Will, Nicole Wallace, former communications director in the Bush White House, Arianna Huffington of the Huffington Post, and Donna Brazile. And George, I have to confess when I found out about this, I first wanted to know what the White House thought. The next thing I wanted to know what you thought given your history with the Nobel Prize committee.

GEORGE WILL: Well, the Nobel Prize committee would with this decision have forfeited its reputation for seriousness if it had a reputation for seriousness. The President has a problem in Afghanistan, he has a REAL problem in Scandinavia. First Copenhagen, then Oslo. The award set off a global cry of two words: “For what?” Well, the committee answered that. They said, after 263 days of his presidency, but really after eleven days, because it was February 1 that the nomination list closed, “He was honored for values and attitudes.” Notice the word “attitudes.” “Values and attitudes shared by a majority of the world’s population.” This is an award for attitudinizing.

DONNA BRAZILE: It is well-deserved because after eleven days…

BRAZILE: C’mon, George. I am a forward-looking, optimistic person, and the President has, in my judgment, he is, it is not only well-deserved, but he must also earn it. George, in eleven days, President Obama overturned many of the policies that much of the world disliked. He ended, banned torture, he proposed closing out Gitmo Bay…

BRAZILE: Yes, yes, it’s a proposal, and he has to work with members of Congress and states to get it finally closed. He closed secret prisons, CIA prisons across the globe. And he reversed a global gag rule. So, yes, in eleven days he committed a great…

STEPHANOPOULOS: Donna went even farther than the President.

After that, the entire panel laughed.

Alas, I’d be laughing, too, if it wasn’t so frightening that anyone with the privilege of regularly offering opinions on national television could actually say something so clearly biased and agenda-driven AND STILL get invited back.

In 2007 Barack Obama endorsed genocide rather than keep US troops in Iraq.

Democratic presidential hopeful Barack Obama said Thursday the United States cannot use its military to solve humanitarian problems and that preventing a potential genocide in Iraq isn’t a good enough reason to keep U.S. forces there. 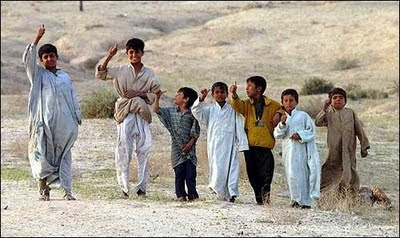 Fortunately, Obama did not get his way.

To be fair, I’m sure Arafat must have said one or two mildly disagreeable things on the way to his award. But hey, now we know why Gandhi never scored one, despite being the long-forgotten father of our country.