DARPA DRONES: The US 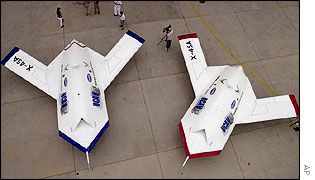 DARPA DRONES: The US Air Force shows off robot planes of the future.

UPDATE: Meanwhile, a scale model of a Japanese supersonic jetliner crashed into the Australian desert Saturday and exploded shortly after it was launched Sunday on the back of a booster rocket. It was designed to test the concepts behind a Concorde-style passenger aircraft.

Meanwhile, UPI says that Russia has lost track of an experimental space vehicle.