How Democrats feel comfortable behaving in public is sometimes shocking, even when they are running for office. Meet Liam O’Mara. He is a history professor pushing socialist policies such as universal basic income, because socialism has worked out so well everywhere it’s been tried. He is also hoping to join the  Democrats in Congress from CA-42. Apparently, O’Mara also believes  that when a conservative black woman tweets facts supported by FBI crime statistics, this is an appropriate response: 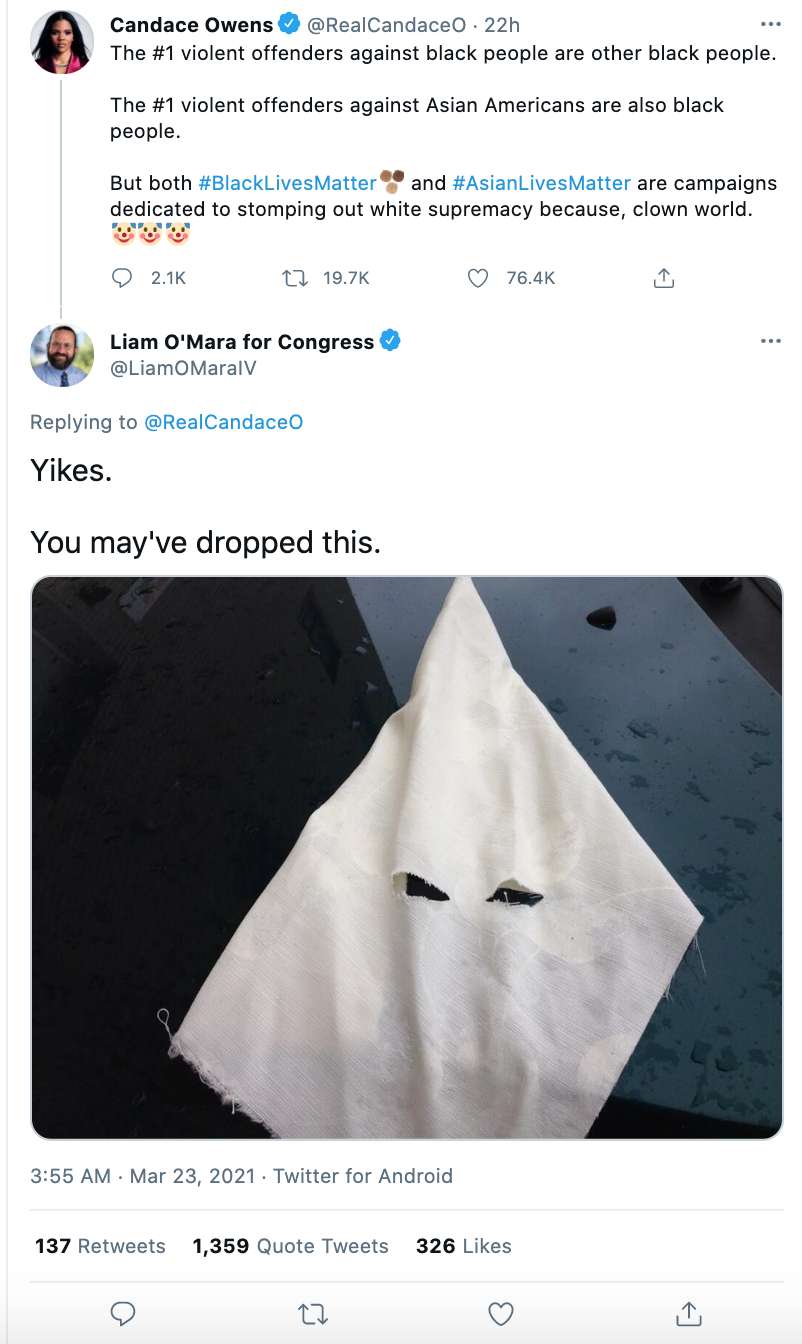 And it gets better. When O’Mara is challenged, he doubles down and defends himself with this:

I tweeted it to someone making straight-up white supremacist arguments to exploit a fragile white male audience. Candace is a paid propagandist, and constantly recycles the same tropes we've seen work on that audience for two centuries.

His definition of a “paid propagandist” is strange. Owens’ book is a New York Times Bestseller published by a division of Simon & Schuster. Candace receives payment for her content through Daily Wire, a legitimate conservative news outlet. Prager University also distributed her content. Dennis Prager and Ben Shapiro are some of the most devout Jews in public life and would hardly condone or pay someone who spouts “white supremacist arguments.”

Whole lot of interesting comments here that read like the "cancel culture" gripes we keep seeing from the right. Each miss the point that Candace is recycling explicitly white supremacist arguments. I study extremist rhetoric for a living, and this stuff is really dangerous.

O’Mara assures the world that he doesn’t need help. He’s an “expert” who studies extremists rhetoric for a living. I can find one book on Google Scholar that has Liam O’Mara IV as a contributor, and it is about the conflict between Israel and the Palestinians. If his chapter was on the PLA and extremist behavior, I stand corrected. However, it does not appear he has written on the subject in a meaningful way.

Nothing Candace Owens said was a “white supremacist argument.” White supremacist arguments are about the virtues of an ethnostate, genetic differences between the races that would posit whites a superior (hence the name of the ideology), and “white genocide.” If O’Mara were an expert, he would know this because he would have read their blogs. And you will have to forgive the skepticism about anyone who calls himself an “expert” after the year we have just lived through.

Finally, after some epic ratios, O’Mara bought a vowel and got a clue, sort of:

I should not have used the image, and fully concede that mistake. But I would and do call out antisemitic and racist rhetoric by anyone. Racism can come from anyone. The image was needlessly inflammatory, though.

Needlessly inflammatory is an understatement. How about entirely inappropriate, disgusting and misplaced? That might begin to cover it. He might want to take a closer look at the narratives Democrats and their compliant media spew into the ether. As of now, there is no supporting evidence that the horrific murders in Atlanta were racially motivated. There has never been any data to support the contention from Black Lives Matter that police routinely gun down unarmed black men at an alarming rate. That is the false narrative Owens was pointing out.

This type of disgusting exchange is encouraged by the singular focus on what people look like rather than what they think, believe, or do. O’Mara is essentially saying that Owens is a prop being paid to espouse ideas that she does not believe just because of the color of her skin. I hate to tell O’Mara, but that is racist to the core.

Even if you do not always agree with her methods, Owens’s political evolution has been on display for all the world to see for years. Those who know her well, such as Dave Rubin, Larry Elder, and Andrew Klavan, find her to be sincere. For this relatively unknown figure to assert otherwise is pretty despicable.

I hope District 42 in California does better than Liam O’Mara in the next election. The last thing we need in Congress is more overeducated white Democrats who hear high-pitched noises, usually called dog whistles, when no sane person could. And because of their exceptional hearing, they feel obligated to make insane and sometimes wildly inappropriate statements. However, Candace can always be counted on to defend herself when required:

How do we feel about Democrats sending photos of Ku Klux Klan hoods to black conservatives as an insult because I’m pretty sure—as my grandfather is still alive and breathing and suffered the REAL klansmen in his youth— that this is RACIST and you are a PIG for sending this. https://t.co/714CFuWYUs

The woman does have a way with 240 characters. And O’Mara’s probably still getting ratioed.