Popular evangelical New Testament scholar Scot McKnight has written a contradictory piece defending Mark Galli and Timothy Dalrymple’s call for evangelicals to remove Trump from office in Christianity Today (Galli retired as editor-in chief; Dalrymple is the new president and CEO). Entitled “Christianity Tomorrow,” it is McKnight’s first post on his new blog at CT. McKnight dredges up a dirty word, “statist,” tinges it with associations of idolatry, and then uses it to beat any evangelicals who disagree with his point of view.

Although “statism” normally refers to the massive centralization of power in the state, not to attempts to curb such centralization, McKnight comes up with own self-serving definition: Statism is thinking that “the solutions to our problems are anchored to the one leading the White House.” “Statism as I am using it here is the idol of making a human the world’s true ruler. Statism exalts humans and human plans and voting. Statism centers its faith in the future on who rules in D.C. Statism makes government a god.”

So who are the statists par excellence in McKnight’s world? Unsurprisingly, while he several times gives lip service to coupling the evangelical left and right, he primarily targets evangelicals opposed to Trump’s removal. This is another variation on the recurring (and nauseating) CT theme that evangelical Trump voters are hypocritical idolaters (a mantra since 2016, appearing too in Galli’s swan song op-ed).

Evidently, this is what Timothy Dalrymple had in mind when he said—ironically, after intimating that evangelical Trump voters have transferred “their unconditional loyalty” from God to Trump—that he would invite contributions on evangelicals and Trump from authors who engage “in a . . . charitable manner.” An inference that I am an idolater along with all other evangelical Trump voters is not my idea of charity.

Christianity Today ‘No Longer Speaks for Evangelicals’ After Impeachment Op-Ed

Galli and Dalrymple Would Be Statists Too, Except They Are “Prophetic”

McKnight approvingly cites Dalrymple’s defense of Galli at length. Paradoxically, McKnight doesn’t think that statism is the belief that the solution to our problems is anchored in getting rid of the one leading the White House.

He defends Galli and Dalrymple on the grounds that their view is “prophetic,” not “partisan,” because it is coming from “Right-leaners” criticizing a Republican. To me, that is a questionable assumption. Fighting for virtually open borders is a central concern for Galli, which would make him more prone to vote Democratic. Moreover, I’ve yet to see a single CT writer charge with idolatry and hypocrisy evangelical voters for Hillary or evangelical supporters of one or more persons among the current crop of hard-left Democratic candidates for president.

Being a prophet is not dependent on critiquing your own social group. Prophets from the southern kingdom of Judah routinely critiqued the kings of the northern kingdom of Israel. They were no less prophetic for doing so.

In addition, it takes far more courage in American society today to voice support for Trump than to advocate for his removal, as indicated by the considerable fanfare Galli received from the rabidly anti-Trump left (The New York Times [and hereand here], The Washington Post [and here and here], The Los Angeles Times [and here], The Atlantic, CNN [and here], MSNBC [and here], CBS’s “Face the Nation,” etc.). The left regards Galli and Christianity Today as useful for accomplishing the goal of getting a Democrat in the White House so that he or she can impose the Democrats’ sacraments of abortion, “LGBTQ” coercion, and judicial tyranny on evangelicals. With only an occasional exception, the media, academy, and entertainment industry are solidly behind this agenda. If I want the applause of this world, I’ll become another Trump hater.

McKnight’s second defense of Galli and Dalrymple is to claim that their perspective was “moral,” not political. Yet the same claim can be made for evangelical Trump voters who believe (rightly) that far greater moral harm to the nation will come from a Democrat in the White House. Moreover, while criticism of Trump can be purely moral, a call for removal from office is intrinsically political.

It is easy to see why McKnight doesn’t give substantive criticism of the left. He presents himself as having an Anabaptist view of limited political engagement, evenhanded in the political debate. Yet after taking a swipe at conservative Ralph Reed’s “Christianity Yesterday” comment to Galli’s op-ed (a swipe embodied in the title of McKnight’s article), he sings the praises of “a justice-oriented evangelicalism” that steers clear of culture wars.

As Exhibit A, he cites Dalrymple’s claim that “the alliance of American evangelicalism with [Trump’s] presidency” has “harmed African American, Hispanic American, and Asian American brothers and sisters.” Yet for all Trump’s alleged racism, no one can cite a single policy harming African Americans. Many of Trump’s policies have helped African Americans, though one almost never hears of this from the Democratic Party’s propaganda arm known as the mainstream media (go here, here, and here).

McKnight cites fondly the view of Randall Balmer, a historian of American religion, that “Christianity operates best from the margins of power, not in its center.” By this logic, evangelicals should always vote for the candidate that most opposes their views, so as to remain forever on the margins. Balmer is not consistent on this point, for he applauds 19thcentury evangelicals for “setting the social and political agendas” that even the left would applaud (aid to the poor, prison reform, unions, public education, peace crusades, and women’s equality). Apparently for McKnight, too, it is okay to look to the state to solve one’s problems, so long as it does not involve “culture war” issues.

Balmer is no neutral voice in this discussion. He is a hard-left, pro-LGBTQ coercion, pro-“choice” Democrat who has arrogantly said that his “evangelical theology assures me that no one, not even … James Dobson, lies beyond the reach of redemption.” He is also the author of a book subtitled, How the Religious Right Distorts Faith and Threatens America; no subtlety there. And he was “devastated” by widespread evangelical support for Trump because Trump was a “twice-divorced, self-confessed sexual predator.” Balmer doesn’t note the inconsistency of celebrating Martin Luther King’s life despite MLK having a sex life similar to Trump’s (also here, here, and here). Nor did he truthfully qualify his statement with an acknowledgment that Trump’s inappropriate sexual behavior had been almost a decade prior (2007) or that Trump had issued an apology (2016) for the predator remarks.

Thus, while McKnight claims to be arguing against both evangelical left and evangelical right, his primary target is transparently the latter: left-approved “justice politics” good, right-approved “culture-warrior” politics bad.

Who Are the Real Anti-Statists Here?

Yet his anti-statist attack on the evangelical right is far more suited to the evangelical left and Never Trumpers. Evangelicals who cast an effective vote against the Democratic candidate in 2020 (which means voting for Trump) have the best case for being anti-statists. Voting in such a way as to prevent the state from promoting the killing of preborn babies and from coercing affirmation of homosexual and transgender behavior is the antithesis of statism, not the affirmation of it. Both are responses to the tyranny of the state.

Think of the Declaration of Independence. The killing of preborn babies is the state’s denial of a right to life endowed by the Creator. The state’s passage of coercive “LGBTQ” laws promoting unnatural practices contrary to the material structure of the human body (a la the Democrats’ so-called “Equality Act”) is a denial of liberty endowed by the Creator and manifested in free speech and the free exercise of religion. How can casting an effective vote against Democratic candidates who have made such abhorrent acts state sacraments be an act of statism?

Such voting is not exalting the state as a “god” but rather seeking to prevent the state from acting like God or, if you will, a demon, an instrument of tyranny. McKnight might as well call John of Patmos a “statist” for viewing the state (the Roman Empire) as an instrument of Satan in the Book of Revelation. He might as well call all the Founding Fathers of this country, including Washington, Adams, and Jefferson, “statists” for opposing tyranny. He might as well call “statists” American churches that made the abolition of race-based slavery in 1860 or civil rights for African Americans in 1964 a central voting issue, and even German churches that exhorted followers to vote against the Nazis in 1928 and 1932. All these saw the state, and who was or wasn’t the head of state, as a solution to key problems of life.

Who Are the Real Statists?

The state should exist to prevent moral liberties from being taken away and moral harm from being done. When it does the opposite of this, Christians should be galvanized against politicians who promote this wrongdoing. In fact, that is precisely what McKnight, Dalrymple, and Galli are arguing for and doing (however misguided in its direction), though they seem to be oblivious to it.

Their insistence that we have to get rid of Trump is pure statism (using McKnight’s definition). Such is the case with the untenable “Trump is a racist” trope, along with the “Trump is a power abuser” trope (Trump is a piker here compared to Democrats), the “Trump is a sexual profligate” trope (true over a decade ago but not so much since), and the “Trump is verbally abusive” trope (again, the left far surpasses Trump in the verbal-abuse department). What are these but an evaluation of whether Trump should remain in office based on his alleged beliefs, behaviors, and policies?

According to McKnight, If evangelicals work to keep Democrats out of power via a vote for Trump, because of Democrats’ immoral policies, behavior, and words, that’s political “statism,” not morality. They are making a god of the state and, as such, are idolaters. But if evangelicals like Galli and Dalrymple work to keep Trump out of power because of how it affects the image of evangelicalism, that’s morality, not political statism. In McKnight’s imaginative reconstruction, they do not think that “the solutions to our problems are anchored to the one leading the White House.” Got it.

McKnight, Dalrymple, and Galli are arguably the biggest statists of all. For they make the removal of a given “ruler” of central significance not only as regards what they claim to be moral government (while ignoring instances of greater immorality in Democratic governance) but also as regards evangelical identity and witness at its very core. Isn’t that anchoring the solution to evangelical problems in getting rid of “the one leading the White House”?

It certainly seems so to me.

Robert A. J. Gagnon is Professor of Theology at Houston Baptist University and author of The Bible and Homosexual Practice: Texts and Hermeneutics, among other works.

Fake News: No, a Christian School Didn’t Expel a Girl Over a Rainbow Cake 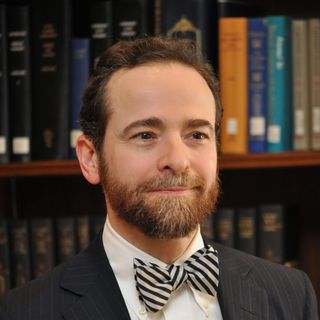 Robert A. J. Gagnon, Ph.D., is a professor of theology at Houston Baptist University and author of The Bible and Homosexual Practice, among other works.
Read more by Robert A.J. Gagnon