Electric cars are expected to outsell gasoline-powered vehicles within twenty years, based on new projections by Bloomberg New Energy Finance.

The news and research organization expects electric cars and gasoline cars to be priced similarly by 2025, turning the automotive industry upside-down and having a severe impact on oil-exporting countries.

What are the reasons? Dropping prices in batteries (a 73 percent drop in the past 7 years), increased manufacturing efficiencies, lower prices, and EV cars having simpler designs that require much less maintenance compared to cars with gasoline engines.

Bloomberg expects that plug-in vehicles will account for one-third of autos in use worldwide by 2040, eliminating 8 million gallons a day of oil production, equivalent to more than all the oil Saudi Arabia exports today. In Europe they expect two-thirds of all new cars to be electric in this same time period, compared to almost 60 percent in the U.S. and half in China.

Adoption of electric vehicles (EV) is already underway by Uber and Lyft, which are adding fleets of EV models. Lyft has a relationship with GM and is adding Bolts to their fleet, and in Europe and China, many of the transportation companies are using Teslas.

One of the surest signs of this transition is this week’s announcement from Volvo that beginning in 2019, every new model will use electronic propulsion, either hybrid or all electric. They’ve already abandoned diesel because of the stricter emission targets established by the EU and the growing concern over its health effects. The company said that between 2019 and 2021 they’ll launch five new electric vehicles.

Volvos are being built in Sweden, but the company is owned by Chinese automotive giant Geely, which likely influenced their decision. China’s Ministry of Industry and Information Technology has set a target that one-fifth of all new vehicles being sold in China in 2025 must be electric and hybrids.

Håkan Samuelsson, president and chief executive of Volvo Cars, said, “This announcement marks the end of the solely combustion engine-powered car. Volvo Cars has stated that it plans to have sold a total of 1M electrified cars by 2025. When we said it we meant it. This is how we are going to do it.”

What may be surprising is that there already more than 30 models of plug-in cars being sold by more than a dozen different brands in the U.S. (This is not counting hybrids that use a battery and a gasoline engine together most of the time.)  These cars vary from those that have a battery that gets as few as 15 miles combined with a gasoline powered engine, to all-electric cars that can get 100 to 300 miles on a single charge. The sweet spots for EVs are those cars that get at least 50 miles with a backup engine, such as the Volt, and the all battery cars with a range of more than 200 miles per charge, such as Teslas and Bolts.

In spite of these optimistic projections, sales of electric cars today represent just a tiny fraction of new car sales, although they are growing at increasing rates.  January 2017 showed a 70 percent year-over-year increase in monthly sales compared to a yearly growth of 37 percent in 2016.

The chart below shows where the U.S. sales are coming from. It’s taken from an excellent downloadable report from ChargePoint, a network of EV charging stations. 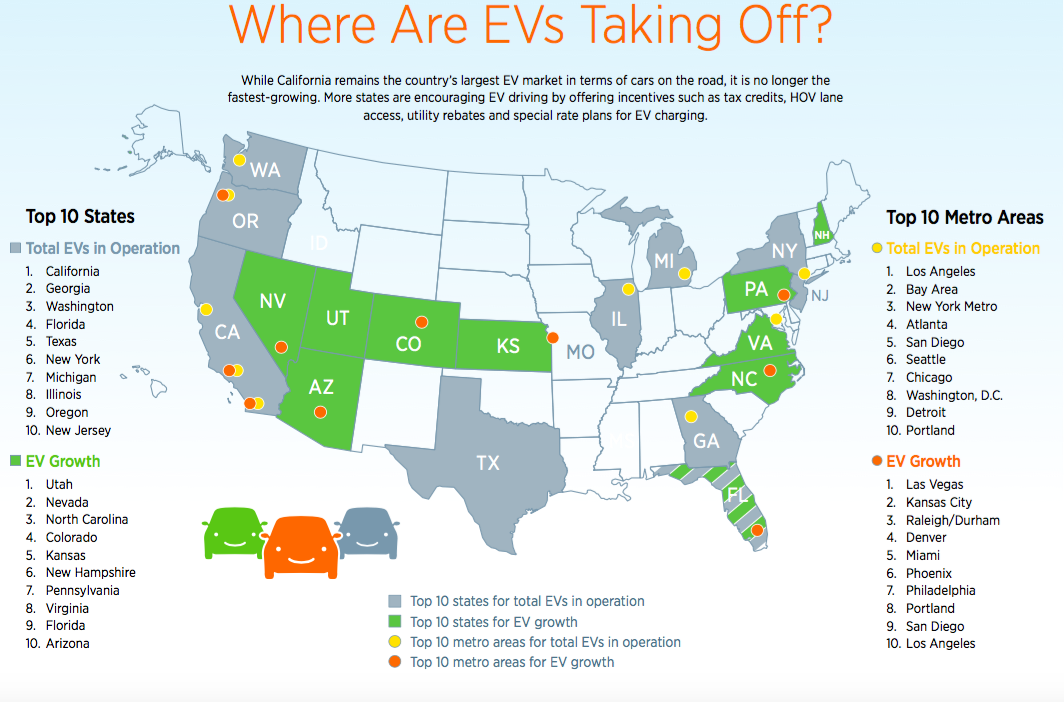