Allah, Odin, and Thor: Mythical Gods of War, Not of Love 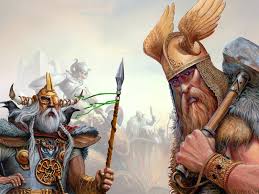 Americans have a naïve view of religion. The religious freedom that is so ingrained in our tradition — and our Constitution — has morphed beyond tolerance to a sort of anthropomorphic acceptance of pretty much anything.

In other words, in order to prove how tolerant we are, we take our basically Judeo-Christian view of what religion and God should be, and assume all other religions share the same goals, have the same values, and are just differing manifestation of the same loving and just God.

Nothing could be further from the truth.

In fact, the God of the Bible is unique in the history of the world’s religions. From Baal to Zeus, from Jupiter to Allah and Odin, the gods of paganism are capricious masters, not loving fathers. Control is their goal — when they think of humans at all — not justice or peace.

But saying so is sooooo judgmental!

Marvel Comics master storyteller Stan Lee took the most interesting of the Norse gods, Thor, the God of Thunder, and made him a crusader for truth, justice, and maybe even the American Way… or at least Western values.

But think of it from the view of the Vikings — what could be more capricious and destructive than the god of the weather?

But of course, a self-centered destructive superhero who loves war and longs to be worshiped would make for a crappy comic book.

On the serious side, though, a misunderstanding of a leading world religion has serious implications for most of the current world conflicts.

A non-rebellious slave is at “peace” with his master, too.

As Nonie Darwish writes in her seminal books Now They Call me Infidel and Cruel and Usual Punishment: The Terrifying Global Implications of Islamic Law, the notion of a loving Father God who oversees a brotherhood of men is something she never encountered until she immigrated to the West. It is a Christian concept that Muslims adopt when living in Western cultures in order to fit in, or because they aren’t particularly informed about their religion in the first place (and want to fit in).

Perhaps because the Quran gives lip service to Jesus, or because of its Middle East origins, or because, quite coincidentally, the main ethnic group that follows Islam is also descended from Abraham, many act as though Islam is somehow related to the Judeo/Christian tradition, however distantly.

But Allah is much more like every other pagan deity… no matter how far flung.

I talked to PJ Media contributor Brian Cherry who, under the pseudonym Brian James, has recently published Ragnarok: The Hammer, Book One in a planned trilogy of novels set in the present day about the Norse prophecies of Apocalypse — hey, unlike the Mayans, the Vikings actually predicted one, you don’t have to infer it by when they calendar happens to end.

Since the end of any religion is one’s eternal destiny, we started there. Brian told me that Odin and Allah agree on the surest — and quickest — way to heaven. Not through faith in a Savior, but through sanctified violence.

Although I’m sure the original myths many of Odin’s circumstances are borrowed directly from the bible, his personality is much closer to that of Allah. The first thing that comes to mind is that he would have loved suicide bombers. The Vikings also had their own 9-11, as Cherry explains.

The Vikings were also the world’s first (and arguably most successful) terrorists. They would appear quietly out of nowhere and often someplace that was undefended…a soft target. The attack on the Lindisfame monastery in 793 is not only an act of overt terrorism, but accepted by most as the start of the Viking age. They did what they did in Odin’s name, and they believe with his blessing. That is not much different then Allah smiling on his followers for killing the helpless in his name.

Lindisfarne was the home of the famed monk Saint Aiden, a center for evangelization throughout northern Europe, and known for an illustrated copy of the Gospels of Mathew, Mark, Luke and John known as the Lindisfarne Gospels. When Thomas Cahill wrote How the Irish Saved Civilization, he had in mind people like the Lindisfarne monks.

To the Vikings, followers of Odin, the Lindisfarne Monastery was as major a symbol of Christianity as the World Trade Center was a symbol of the capitalist West to certain followers of Allah in 2001. And there was little booty to be gained from the raid, which was conducted in as bloody a way as possible and sent shudders through Christendom. The scholar Alcuin wrote, “The heathens poured out the blood of saints around the altar, and trampled on the bodies of saints in the temple of God, like dung in the streets.”

The followers of Odin did not start their war on Christianity with the attack on Lindisfarne, as Cherry explains.

Odin and Allah both seemed to have a major problem with Christians. Before the Viking age of the Norse started with the attack on the Lindisfame Monastery, the pagan followers of Odin persecuted and purged Norway of Christians. This started in late 772 or early 773 AD. The Quran (as the inspired word of Allah) also shows an intolerance for Christians and Jews.

About this time I can hear someone who had the same history teacher as Barack Obama and Bill Clinton yelling, “Hey! What about the Crusades?”

Look, like Odin, Allah made his first appearance somewhere around the 7th century. Conversion was more by force and violence than by rhetoric. While Obama seems to adopt the Third World position that Islam is the organic and legitimate religion of Arab regions, it’s worth remembering that Alexandria, the great city of Egypt, at one time was a central city of early Christianity.

So, while the Crusades, whatever their wisdom or excesses, took on the mission of “liberating the Holy Land,” to act as though it was some imperialistically religious, unprovoked attack is to pretend Normandy was an act of aggression against a peaceful country. 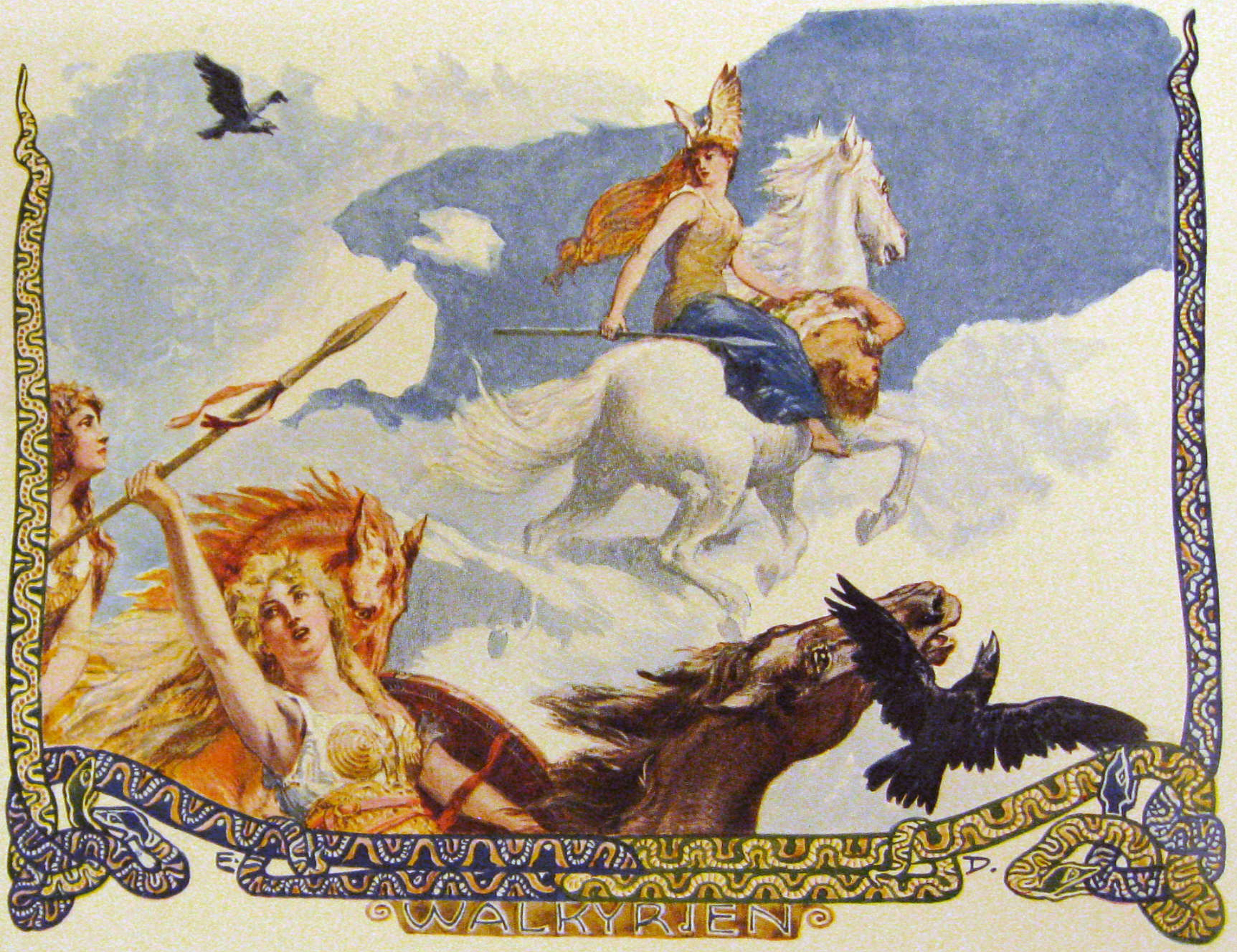 Perhaps the most remarkably specific similarity between Odin and Allah is how women are used to welcome the slain warrior into heaven. Everybody knows by now about the famed 72 virgins made available to the man who dies in the service of jihad. (What happens to these apparently specifically created creatures whose sole reason for existence is to service the jihadist after they are no longer a virgin is not spelled out, however…)

Odin has his own version of this. Valkyries meet the warrior who is killed in battle and escort him to Valhalla. Any other role is not spelled out, though Valkyries are certainly not presented as asexual creatures in any interpretation of Norse myths. Cherry speculates, “Valkyries guided/carried the hero to Valhalla. Servicing then was presumably the in flight entertainment.”

But then sex plays a central role among all the gods in Brian’s modern interpretation of the Viking’s gods, and their interactions with modern American culture.

So enough serious stuff. Time to talk about Brian Cherry’s (aka Brian James) Ragnarok — easily the most fun way I can think of to get a good idea of the various personalities of Norse mythology (yes, we can call it that now, since darn few Swedes believe this stuff anymore, unlike the other religion we have been discussing) .

First, forget everything you absorbed from the (really terrific) Avengers movies. Starting with the Hammer, Mjolnir.

Unlike what Marvel Comics had to say about the Hammer of Thor (or what any other myth describes regarding the use of powerful, supernatural weapons) using Mjolnir had nothing to do with the purity of one’s heart or the strength of their convictions. If morality truly dictated what tools one could use, none of the Gods would be able to pick up a Craftsman screwdriver from Sears without bursting into flames.

That gives you a flavor for Cherry’s tone here. From proposing that Chuck Mangione was used to torture souls in Hel, until even those in charge couldn’t stand it anymore; to souls from Cleveland finding Hel a respite, to the Gods using Facebook, Cherry cleverly mixes satirical cultural references with nonstop action for an irresistible ride for anyone inclined to take it.

Ragnarok is the Viking version of Armageddon, a civil war between their gods that takes place on Earth, destroys the world, and finishes off their main deities in the process. In the first book in a planned trilogy, Ragnarok: The Hammer, Cherry posits that Odin has banished many of his offspring to modern day America, but is getting concerned that the day of Ragnarok is approaching and begins to take steps to try to beat the prophecy and survive it.

Thor is playing football for the Oakland Raiders. He is so fearsome that starting and backup quarterbacks feign illness or injury to avoid playing the day they would face him. But for Thor, football is just a way to earn money for partying and to gain the adulation and hero worship he craves. But deep down, he is still grieving the loss of his wife, Sif, whom Odin sent on a suicide mission. Upon learning of her death, Thor threw his Hammer away, and it landed in Area 51. (Okay, a little of the Avengers survives here, along with the notion that Thor, for all his faults, is still a better person than Loki.)

Loki is now the head of Amway (speaking of cults) — and using the company to prey on young women. The Goddess of Love and Beauty, Freya, is working as a rather intimidating and appealing prostitute, and Baldr, God of Light, surprises everyone by walking out of Hel — apparently one can only take so many repetitions of Feels So Good.

Odin wants control of the Hammer, and thinks he can use it to forestall his end; but only Thor can wield it (pure of heart or not). Odin enlists the demon god Surt, and even the dragon Nidhogg (who is supposed to kill everybody in the end of Ragnarok)—along with a surprising appearance by Fenris, the original Wolfman.

Like all self-published books, Ragnarok has its rough spots and editing mistakes, but it’s easily forgiven in this wild and wooly ride, one that might lead to the Viking version of a fatwa against the author — if there were still Vikings. But he has little reason for worry, as Cherry reminds us:

Of course the biggest similarity between Odin and Allah is that from a deity standpoint, they are both as real as Hawkman or Mr. Bubble.

How Would History Be Different if the Nazis Built the A-Bomb First?

10 Secret Reasons Why The Avengers Is the Best Superhero Film

The 7 Most Badass Founding Fathers