Elon Musk is building his satellite-based Starlink service, but he paused launches until some new spacecraft are ready. Quarts reports that those spacecraft give Starlink a new capability — the ability to bypass the ground stations that Starlink currently depends on.

Starlink users need to be within several hundred miles of a ground station that is plugged into the internet, so the satellites can relay data back and forth between them. SpaceX is not going to be able to set up these stations in authoritarian countries, or likely many of their neighbors.

That’s not just a technical issue, it’s also a regulatory and censorship issue. For instance, Afghanistan’s internet and smartphone access went from near zero to about 90% during the war that Joe Biden just threw away. The Taliban are heavy into censorship and are expected to clamp down very hard on free speech. That’s easier to do against conventional, terrestrial internet service. But Musk’s Starlink with its laser system may be able to elude Taliban censorship.

If it works, the satellites will be able to link directly to each other more efficiently. That, in turn, means that instead of needing a ground station a few hundred miles away, a user could have their data sent back and forth through the Starlink network to a ground station anywhere.

“Lasers [sic] links alleviate ground station constraints, so data can go from say Sydney to London through space, which is ~40% faster speed of light than fiber & shorter path,” Musk tweeted.

That tweet prompted some questions about regulation by governments on the ground. Musk launched the perfect response. 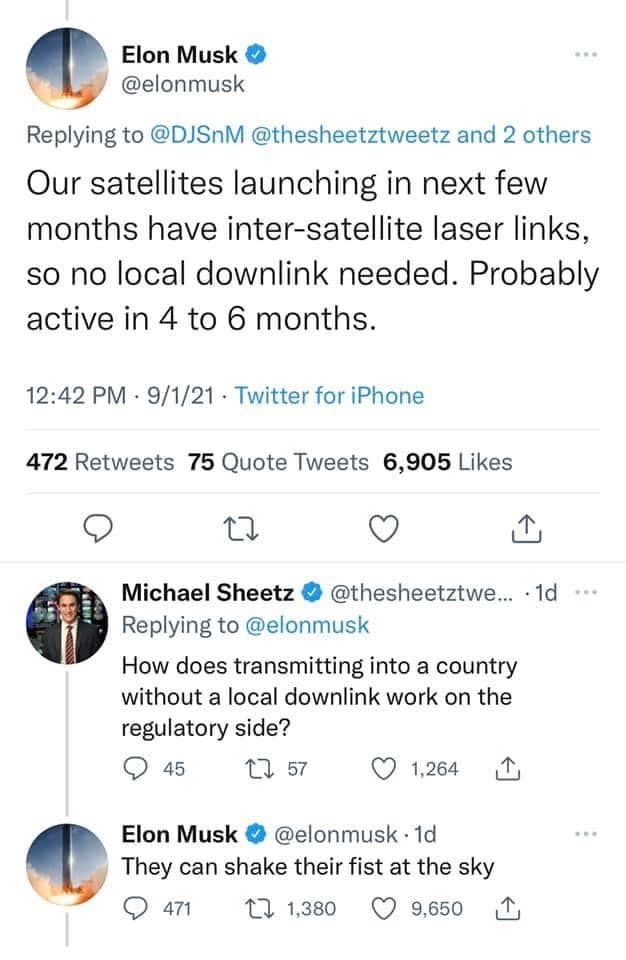 That attitude is what brought Elon Musk to free Texas.

Related: Musk: Electric Cars Will Require a Lot More Electric Power Than We Currently Have

Quartz writes that the Taliban and others who sit on thrones atop chaotic failed states will have little recourse but to shake their fists at the sky, but China may have an easier time blocking signals. North Korea sits somewhere in between those extremes. Maybe Starlink can become a tool to fracture and eventually destroy that regime.