Carano’s character was a big part of what made the show great. She played the part of former rebel commando Cara Dune with aplomb, believably playing a tough woman because she is one in real life. Fans love her — both the character and the actress.

True, baby Yoda is the star, but in a show with zero weak links Carano still stands out in a very strong cast that includes the likes of Pedro Pascal, Katee Sackhoff, Carl Weathers, Ming-Na Wen, Bill Burr, and Giancarlo Esposito. Who am I leaving out? It’s a great cast. Right — Mark Hamill. That scene when he does what we’ve waited decades to see Luke Skywalker do as a full-on Jedi is as good as Star Wars gets.

Severing ties with Carano was, frankly, stupid, especially since her co-star Pedro Pascal had made a similar analogy to hers on social media — but his was dead wrong on the facts and he didn’t get fired. Neither of them should’ve gotten fired. Cancel culture is stupid.

Carano never backed down and eventually announced that she’s working on a movie with the Daily Wire. Then Disney, which owns National Geographic, quietly shelved an episode of Running Wild with Bear Grylls that features Carano.

Earlier this year, the actress took to social media to reflect on her experience filming a future outing of survival series Running Wild with Bear Grylls, which was set to air on the Disney-owned Discovery Channel. However, some online sleuths have uncovered the episode listing for the upcoming run, and the former MMA fighter’s name is nowhere to be found.

It all causes one to wonder about anti-trust implications.

But over the weekend, Carano broke some good news on her Facebook feed. 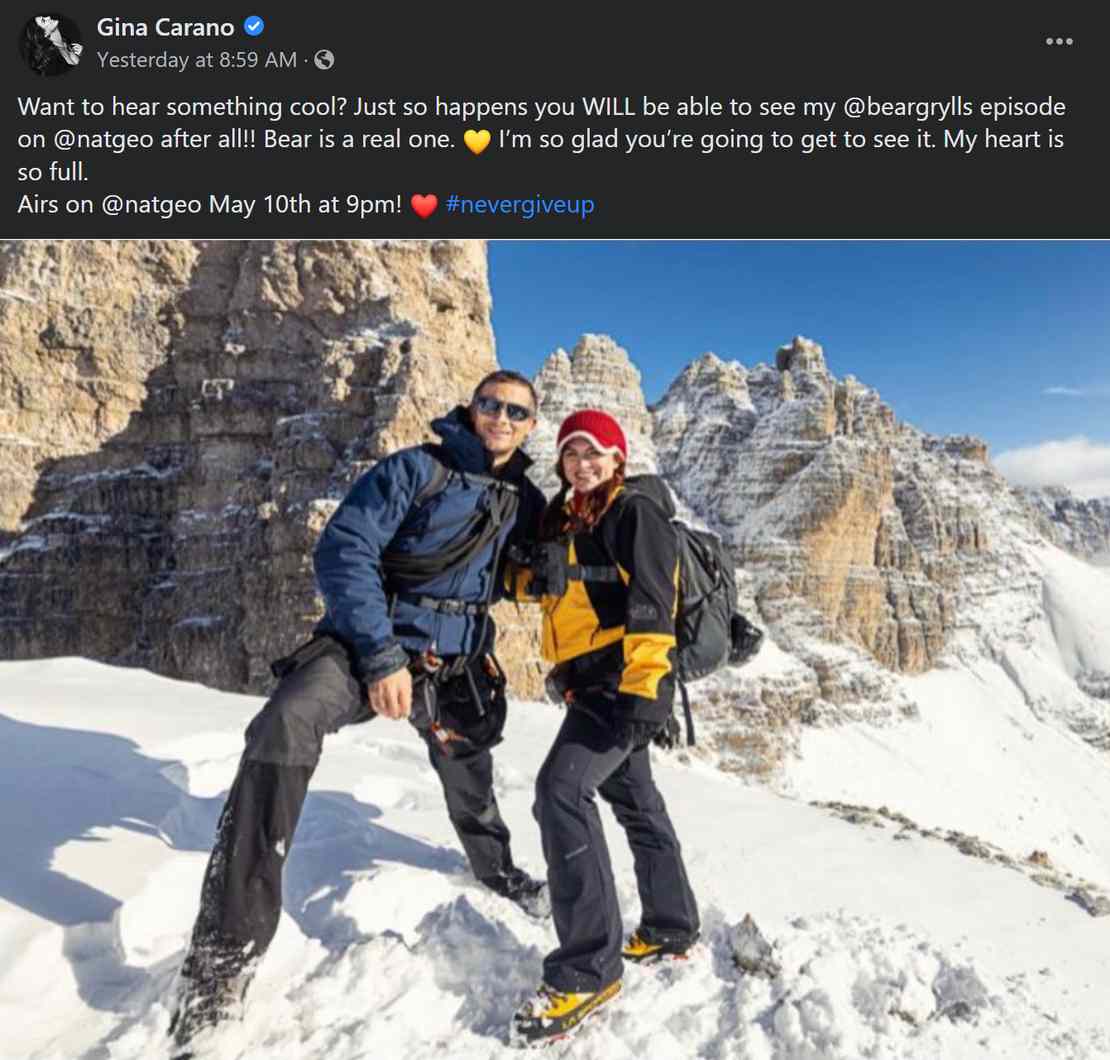 If you haven’t seen the show, Running Wild with Bear Grylls is pretty good. He goes out into his favorite inhospitable, insanely dangerous places and drags a celebrity along for their torture and the audience’s amusement. I’ve seen episodes with Deion Sanders, Danica Patrick, and Terry Crews. The Sanders episode swerved into unexpectedly serious territory when the NFL Hall of Famer admitted that he’d gotten close to suicide but his Christian faith pulled him through. Grylls shared that he, too, is a Christian and his faith has powered him through tough times.

I don’t care what anyone says, Terry Crews is a national treasure. The ripped actor best known for playing Chris Rock’s dad on Everybody Hates Chris, for his hilarious role on Brooklyn Nine-Nine, and for starring in some crazy Old Spice ads is a consistent voice of sanity and reason.

He also turns up with Muse:

And he fanboys over at K-Pop phenom BTS.

Bear Grylls’ show is good too, and now we’ll get to see Gina Carano back on TV on a network owned by Disney on May 10. I’ll be watching.

Bryan Preston is the author of Hubble's Revelations: The Amazing Time Machine and Its Most Important Discoveries. He's a writer, producer, veteran, author, and Texan.
Read more by Bryan Preston
Tags: CANCEL CULTURE