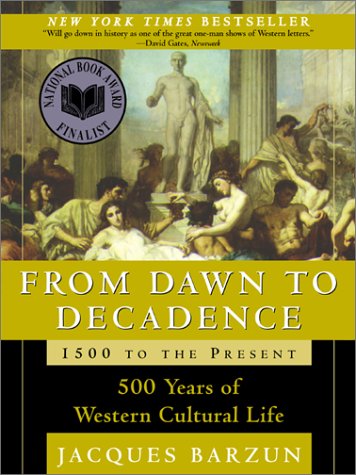 Here’s some books I read this year that are worth looking into.

For one reason or another, most relating to work projects, I did a lot of re-reading this year. Here are three good old good ones that stood out:

From Dawn to Decadence by Jacques Barzun is a book I found life-changing the first time out. It’s a look at modern western culture from the Reformation (the dawn) to the modern world (the decadence). Barzun was a genius of vast learning and this was his masterpiece, published when he was 93. The book is not easy, but to my mind it’s a must read for anyone who cares about where we came from and where we’re going.

I first read Dostoevsky’s The Brothers Karamazov decades ago. For me, it paled in comparison to Crime and Punishment which had utterly rocked my world when I was 19. But since then, I’ve read it again and again and each reading opens up new layers of emotion and meaning. In my life, it will never match C&P, which marked me indelibly, but it is clearly greater in scope and depth and — not to belabor the obvious but — a masterpiece of world literature. This is a wonderful new translation.

The Big Sleep by Raymond Chandler also marked me for life. I read it as a boy and it made me want to write crime fiction. Returning to it now was a Proustian experience — if that’s not too big a literary stretch. Reading it on my e-reader, I could practically feel the old paperback in my hands. A brilliant piece of American writing about the weary business of being an honest man in a corrupt world. Again, it’s obvious, but must be said: the writing, the characters, the setting and the attitude make it a classic in the field beyond question. More of my take on Chandler is here.

I’ve complained before about books by women. Feminism has rendered too many of them dishonest and ideological, afraid or unable to depict themselves as they are and discuss the world bluntly and honestly. So it surprised me to find the best three new books I read this year were all by women.

On the non-fiction side, there was Sharyl Attkisson’s Stonewalled, which I reviewed here. The story of a top reporter who was forced out of CBS News by their pro-Obama bias. Fair, balanced and unafraid, and very much worth reading — not for what it says about this corrupt administration but for the insight into the corrupt media that work so hard to hide the administration’s corruption.

And two novels. The Little Stranger is a top flight ghost story from Sarah Waters. Fans of Downton Abbey and ghost stories and just good writing will find it irresistible. And The Goldfinch, which I reviewed here complete with my bizarre prediction. This is a Pulitzer prize-winner by Donna Tartt. Wonderful writing and unforgettable characters.

Finally, the best old book I read for the first time, and one of the best books I’ve ever read: The Weight of Glory by C.S. Lewis. This is a collection of speeches and essays by the man who may have been the most important Christian apologist of the 20th century. Each one I read seemed the most brilliant piece I’d ever read, until I read the next one! Lewis is taught too little in universities, I think. I never read him until I began to think of converting. But really, in a broader sense, I don’t think you can understand the western thought of the 20th century without reading him, any more than you can understand it without reading Freud. Mere Christianity is the place to start, but this went further and deeper.