Remember “14 days to slow the spread?” When social distancing began in earnest in March, political leaders encouraged Americans to stay home, avoid crowds, and minimize their exposure in order to prevent hospitals from getting overwhelmed. Coronavirus hospitalization data from the Centers for Disease Control and Prevention (CDC) suggests that early social distancing measures worked. Hospitalization rates peaked in early April, even in hotspots like California and New York. Other conditions used to justify the original lockdowns have also not held steady.

So why is so much of America still in one phase or another of lockdown? There are good reasons and there are not-so-good reasons.

“While our leaders fret and our hospitals furlough – the EID COVID-19 numbers are out and they show that the overall hospitalization rates peaked OVER A MONTH AGO on the week of April 5th,” Hart tweeted with a graph showing the trend for New York and California.

“Note also the massive differences between New York and California overall per week. Given what you can see with your own 2 eyes here does the rhetoric of your leaders and media reflect this? Or do they STILL push an unrelenting, massive, existential threat from [COVID-19]?” he asked.

2/ Note also the massive differences between New York and California overall per week.

Given what you can see with your own 2 eyes here does the rhetoric of your leaders and media reflect this? Or do they STILL push an unrelenting, massive, existential threat from #COVID19 ? pic.twitter.com/WBaCmQMk11

While the hospitalization rates in New York and California peaked in the week of April 5, the rates in Connecticut skew the overall network rates on the CDC’s EID widget. While New York’s hospitalization rate peaked around 8.9 per 100,000 in the week of April 5 and California’s rate peaked around 3.6 per 100,000 during that same week, Connecticut’s rate did not peak until April 18 with 37.3 per 100,000. 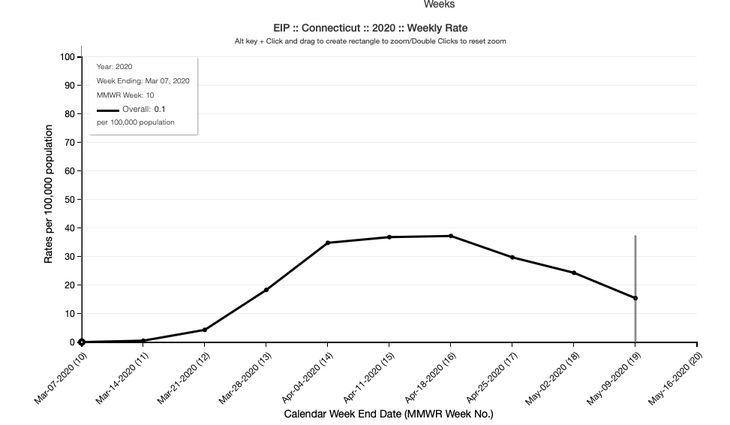 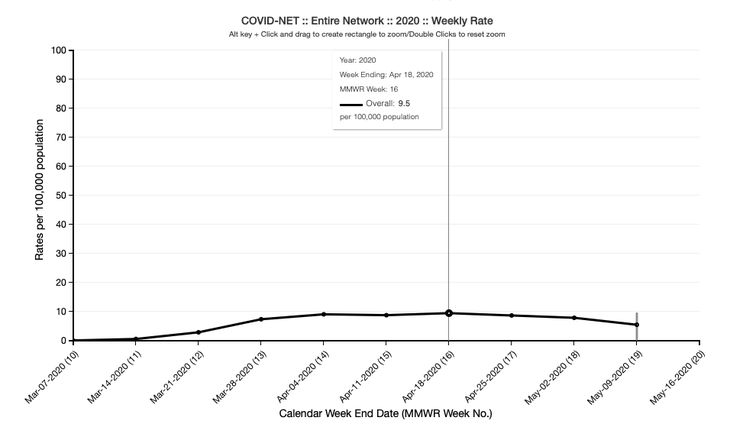 All network coronavirus hospitalizations graph from the CDC.

The peak of coronavirus hospitalizations has come and gone, and there is even more reason to be rosy about America’s chances of beating this virus.

Early estimates of the COVID-19 death rate, cited to justify the lockdowns, have proven far too pessimistic. In March, the World Health Organization (WHO) estimated a 3.4 percent fatality rate and Dr. Anthony Fauci estimated that the fatality rate of the coronavirus was about 2 percent. As PJ Media’s Matt Margolis reported, at least five studies have placed the death rate below 1 percent, confirming President Donald Trump’s hunch.

This data raises many questions about the continuing lockdowns. If the hospitalizations peak has passed, hospitals will almost certainly not be overwhelmed by the pandemic, and governments should re-examine restrictions on elective surgeries and other medical practices. Personnel on the frontlines of the coronavirus should receive priority access to personal protective equipment (PPE), but the bans on other medical practices should be lifted. Non-essential procedures have been canceled, draining hospitals of much-needed cash right when hospitals are needed to fight the pandemic.

Meanwhile, in the broader economy, millions are out of work, driving unemployment into levels not seen since the Great Depression. A recent study has found that coronavirus anxiety — including increased anxiety from the economic insecurity of the lockdowns — threatens more health damage than the lockdowns can possibly hope to save. No fewer than 500 physicians sent President Donald Trump a letter warning about the health dangers of the lockdowns. “In medical terms, the shutdown was a mass casualty incident,” they wrote.

So why have the coronavirus lockdowns continued, despite this tremendous economic and health cost?

Coronavirus Isn’t Nearly as Deadly as We Thought. So Why Did the Lockdowns Happen in the First Place?

To be fair, many leaders are afraid to reopen the economy right away. After consulting with the Heritage Foundation’s coronavirus commission and many others, President Donald Trump laid out a phased reopening plan based on milestones for decreasing coronavirus spread. As different regions of the country record a downward trajectory in coronavirus cases, they should reopen in phases.

Yet the delay in reopening is also political. A recent study showed that Democratic governors were three times more likely than Republican governors to impose a lockdown. This would make sense, given the Democratic control over many population centers experiencing large outbreaks: New York City, Chicago, Los Angeles, and Washington, D.C., for example. However, the study found that “counterintuitively, the percentage of the state’s population infected with COVID-19 had the weakest effect on the governors’ decisions of all the four variables.”

Democratic governors like Gretchen Whitmer (D-Mich.) have insisted that they will follow “science” and that reopening has nothing to do with politics or pressing concerns about economic devastation. This is a transparent dodge. Michigan’s Republican-dominated state legislature has sued Whitmer for her attempt to overrule the legislature and extend her tyrannical lockdown. Court of Claims Judge Cynthia Diane Stephens heard arguments in the case on Friday and has yet to issue a ruling.

In some cases, it appears state and local leaders are using the coronavirus to justify a power grab. Left-leaning leaders may also prefer the technocratic approach of putting health officials in charge of complex decisions that involve far more than just health concerns about the virus. This “progressive” approach overlooks the devastating side-effects of continued lockdowns.

To be fair, Gov. Jared Polis (D-Colo.) has begun reopening the economy. He even revised down the numbers of COVID-19 deaths recently. Polis deserves credit for bucking the trend.

When Republican governors have issued lockdowns, they have also lifted them. Gov. Ron DeSantis (R-Fla.) has handled the crisis well, but left-leaning media outlets rush to condemn him and praise Gov. Andrew Cuomo (D-N.Y.), whose inaction arguably contributed to the New York City area becoming the U.S. epicenter for the virus.

Meanwhile, Democrats in Congress have repeatedly obstructed relief efforts in an attempt to push their pet projects and never let a good crisis go to waste. Presumptive Democratic nominee Joe Biden has called the coronavirus crisis a “wake-up call” on climate change and an “opportunity” for “structural change” on voting and climate change.

Whatever their motives, “liberals” tend to prefer extending lockdowns while conservatives are clamoring for the economy to reopen. Both have legitimate concerns, but the data suggests the coronavirus threat is far less dangerous than it appears.