Kruiser's (Almost) Daily Distraction: Is It Time We Returned to the Halcyon Days of Flip Phones?

(Kruiser’s Permanote Description: This column is intended to be a lighthearted, short-form way to frequently connect with our cherished VIP readers. Sometimes it will be serious. Sometimes it will be fun. Sometimes it will be a cornucopia of intellectual curiosities and fascinations. OK, maybe not so much the last one. Anyway, as this is a departure for me, I’m including this explanation at the top of each post for a while. Also, non-subscribers can see the first couple of paragraphs so I am in desperate need of filler until we get to the private stuff (subscribe here). Please remember that there is a standing invitation to ask me anything in the comments. Once a week, I’ll answer.)

Before I even begin today let’s get something straight up front: I am a huge fan of technology. I love everything about 21st-century gadgets. Never once have I railed about the amount of time people spend on their phones. Hell, I’ve never even thought it. The more time other people are on their phones, the less time they have to bother me. You’re coming very close to describing my version of paradise there.

I do, however, become occasionally judgmental of how much time I spend goofing around with my phone.

My phone is mostly a time-wasting affectation. I work at home on my computer most of the time. I don’t need a smaller version of that around to help me get anything done. I send maybe three emails a week, so even when I’m out of the house it’s not really a work necessity.

In essence, I spend almost a grand every couple of years on a camera that I use to take pictures of my food for Instagram. 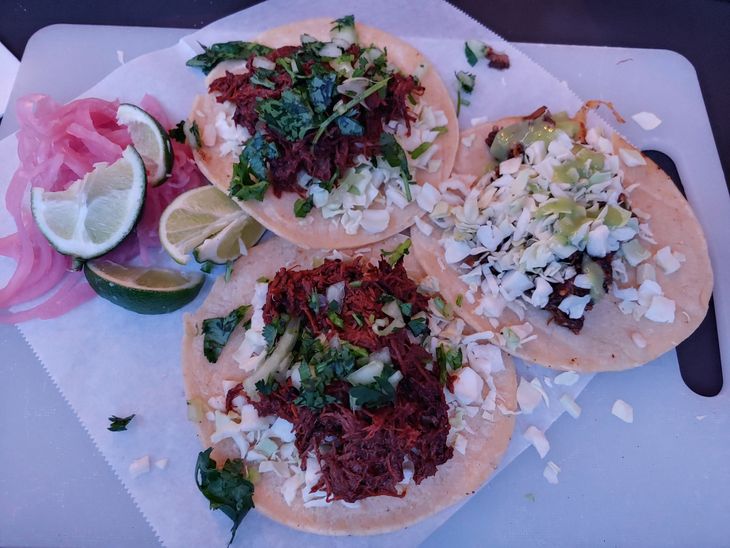 As you can see, I don’t even bother to adjust the phone’s camera to take a good picture because I’m usually too hungry to care. The money invested may be a little overkill is all I’m saying.

Those tacos were freakin’ amazing, by the way.

Admittedly, my phone does get some actual phone use. I talk to my mother and my sister, and text my daughter. Yeah, I text friends too, but the focus is on staying in touch with the family.

Beyond that, I mostly use my phone to goof around on social media or play games. Very often, I’m playing a game on my phone when I could be ten feet away playing a real game on my computer.

The phone is that distracting.

Recently, I developed a sharp, repetitive stress-type pain in my left elbow. The only things I do repetitively with my left hand and arm are eat, shoot a handgun, and hold my phone. I can assure you that I don’t eat or shoot enough to get repetitive stress pain.

I’m still a big smartphone fan. I had two or three Palm Pilots back in the day before they gave way to smartphones. Still, nostalgia is flooding my brain with the idea that the Motorola Razr I had back in the early aughts is the favorite out of all of the phones I’ve had.

It’s almost new-phone time again and I’ve been wondering if I should experiment with one of the relatively inexpensive throwback flip phones my provider has to offer. You know, get back to a simpler time. It’s not exactly building my own log cabin but it’s a start.

I’m going to go play chess on my phone while I think about this.

PJ Media senior columnist and associate editor Stephen Kruiser is a professional stand-up comic, writer, and recovering political activist who edits and writes PJ's Morning Briefing, aka The Greatest Political Newsletter in America. His latest book, Straight Outta Feelings, is a humorous exploration of how the 2016 election made him enjoy politics more than he ever had before. When not being a reclusive writer, Kruiser has had the honor of entertaining U.S. troops all over the world. Follow on: GETTR, MeWe, Gab, Parler,
Read more by Stephen Kruiser
Tags: BIG TECH