The Once Mighty Times Is a National Embarrassment

The New York Times is, for better or worse, still the newspaper of record in the United States. That title obviously doesn’t carry the prestige that it once did. The Times has basically won a war of attrition as the newspaper industry across the land continues to fade into irrelevance. If it hadn’t already had such a prominent position in American news consumption, it would be on the verge of disappearing soon too.

The Times just had a particularly offensive Memorial Day Weekend, and I say that as someone who is so used to their biased nonsense that I try not to let it bother me any more.

First — and this may have only offended me — the editorial brain trust at the paper decided to do a gimmicky front page on Sunday that listed the names of Americans  who died from COVID-19. Of course I believe these people should be mourned. What bothered me is that there is a very, very specific group of fallen Americans who we are supposed to remember on Memorial Day Weekend and I found the timing of this to be exceedingly off-putting.

The timing of the above example was undoubtedly deliberate and intended to deflect from duly honoring our war dead. That was a slight. What the editorial board did to kick off the weekend intended to honor our military dead was egregiously offensive and un-American.

On Saturday, the editorial board posted an Op-Ed titled, “Why Does the U.S. Military Celebrate White Supremacy?”

Our own VodkaPundit did a wonderful job of shredding this insanely awful take:

The NYT editorial board chose Memorial Day weekend to smear the U.S. military with the Ku Klux Klan’s “blood-drenched tradition of racial terrorism.”

Maybe when they wrote “military” they meant to use “Democrats,” because as more people ought to know, the Klan was founded to serve as the Democratic Party’s shock troops against freed blacks in the South.

Pulling zero propaganda punches, the NYT’s banner art included an image of a white bullet with eyeholes cut out to look like a Ku Klux Klan hood.

Never mind, I guess, that the military was one of the first segregated American institutions to be fully integrated, and with almost mind-blowing speed following President Harry Truman’s order to do so.

It’s as if their target audience is every foreign enemy of the United States.

The editorial board at the Times is made up of people who, quite frankly, don’t get out and meet real America much. When they’re offensive to conservatives we know it’s part of the mission statement. This Op-Ed, though, seems like they’re even out of touch with mainstream Democrats.

I’ve done a lot of overseas shows for the troops with liberal comics from New York and Los Angeles. They are all very pro-military and, although I haven’t spoken to any of them this weekend, would probably find this to be greatly offensive. 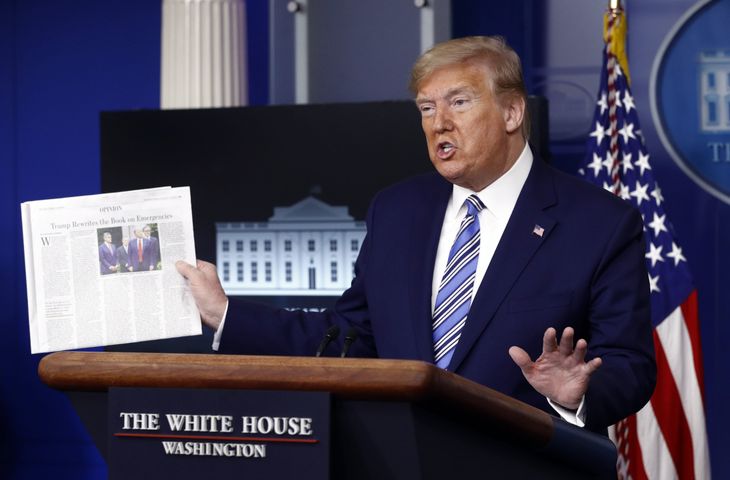 President Donald Trump holds a copy of a newspaper as he speaks during a coronavirus task force briefing at the White House, Sunday, April 19, 2020, in Washington. (AP Photo/Patrick Semansky)

It’s precisely this kind of WAY beyond the pale leftist garbage that makes me so enjoy when President Trump becomes combative with the press. They work overtime to deserve the scorn.

In case you missed it over the holiday weekend, I expanded upon that in my previous column.

Is the Times Still a Necessary Evil?

Full disclosure: I subscribe to The New York Times. A lot of conservative journos and opinion people like me do. As you are well aware, a lot of what I write is media criticism. Liberal media bias was what got me writing about politics in the first place a long time ago. The Times subscription has long been viewed as a necessary evil by many of us, but we’re questioning that now.

Even in the recent past, there was some journalism still happening at the paper. That’s all out the window in the Trump era. I also really used to enjoy the Books section and the Arts section, but those are both just a bunch of politicized Op-Ed crap now. The virtue-signaling is toxic.

Still, if I want to know where to focus my anti-bias anger that day, The New York Times is still the best place to begin. And I can write off the subscription.

Things like this recent Op-Ed give me pause and make me wonder if I should do a protest cancellation, however. It won’t really hurt them but it might slow down my workday and everything eventually becomes all about me.

There is actually still some real journalism going on out there, just not at the Times. State-level bloggers on both sides of the aisle are doing some good work. Newspapers are a lost cause though, I’m afraid.

During my brief, post-divorce corporate phase I had a short stint with The Los Angeles Daily News working in real estate advertising sales (right before Craigslist blew up all of that). I was surprised at how old-school everyone in the newspaper industry viewed themselves. This was in 2005, yet they all saw themselves as throwbacks to the 1930’s newspaper days, when they were more respected. 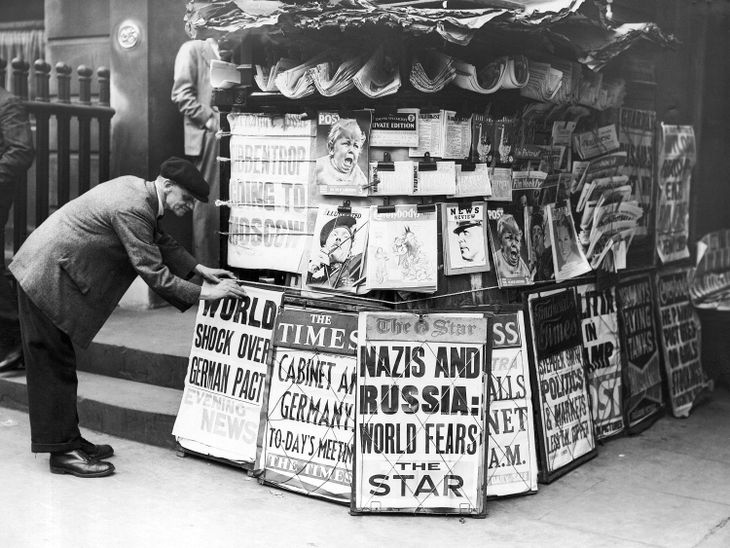 A news vendor sets up his placards in a London street, on August 22, 1939, so that even those who ride by may read something of the international tension. (AP Photo)

Even the idea of a “reporter” feels like it’s rapidly become antiquated. The Times led the way in blurring the line between news and opinion until the former almost completely disappeared. That’s the crackpot Op-Ed pieces in any of the major papers can’t be dismissed. It’s all Op-Ed now.

PJ Media senior columnist and associate editor Stephen Kruiser is a professional stand-up comic, writer, and recovering political activist who edits and writes PJ's Morning Briefing, aka The Greatest Political Newsletter in America. His latest book, Straight Outta Feelings, is a humorous exploration of how the 2016 election made him enjoy politics more than he ever had before. When not being a reclusive writer, Kruiser has had the honor of entertaining U.S. troops all over the world. Follow on: Gab, Parler, MeWe
Read more by Stephen Kruiser
Tags: MEDIA BIAS MILITARY NEW YORK TIMES
SHOW COMMENTS