Democratic presidential nominee-apparent Joe Biden got hit with a double-whammy today from his one-time allies in the major media. “How will the Democrats pull a Torricelli and replace Biden on the ticket with someone who can win?” used to be a question limited to the comments sections on the right side of the blogosphere. Now it’s a question debated openly on the op-ed pages of the MSMDNC’s two biggest newspapers.

In the New York Times on Sunday, “Catholic Left” opinion writer Elizabeth Bruenig argued that “Tara Reade’s allegations against Joe Biden demand action,” and that she “can assert with firm conviction” that “Democrats ought to start considering a backup plan for 2020.”

Tellingly, Bruenig notes that the Democrat-friendly (to say the least!) Planned Parenthood Action Fund has called for “a more thorough investigation than Mr. Biden’s camp has currently agreed to.” Maybe it’s possible for a Democrat to get elected president without the aid and support of Planned Parenthood’s political action wing, but I doubt they’d want to try.

The Washington Post chose today of all days to publish a piece for the very first time by Cedar Rapids Gazette columnist Lenz, previously not well known outside of Cedar Rapids, must have grabbed some eyeballs at Biden HQ with this headline: “Biden should step aside. We can’t sacrifice another woman for political gain.” 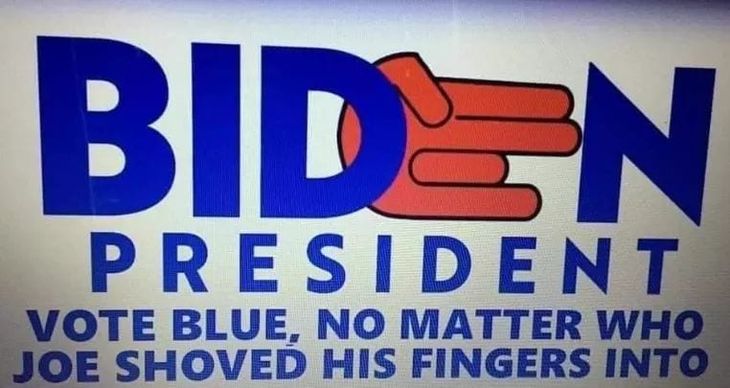 It’s a strange column, much of it devoted to rehashing the discredited claims against Supreme Court Justice Brett Kavanaugh, and boilerplate Orange Man Bad material. Lenz nevertheless concludes about Biden that “Our presumptive nominee stands credibly accused of sexual misconduct.

Lenz also included this story about herself and Biden that went viral back in December:

I had been committed to voting for the Democratic nominee, even if that person wasn’t my preferred candidate. And I intended to vote for Biden despite having had an unpleasant experience with him on the campaign trail. In September 2019, in my role as a columnist for the Cedar Rapids Gazette, I moderated a forum on LGBTQ issues with several presidential candidates. At the forum, I asked Biden about his history of voting for the military policy known as “Don’t ask, don’t tell,” and he replied, sarcastically, “Well, aren’t you nice?”

I replied, “Just asking what people want to know.” The audience applauded. Later, as we walked off the stage, he walked by me and said, dryly, “Well, aren’t you a real sweetheart.”

And that’s just it, isn’t? Democratic women know that Biden is a creepy guy who is often condescending or even disdainful to women who challenge him, as any lying dog-face pony soldier could tell you. Democrats had hoped that Biden would be electable because he was a nice, decent fellow who would return us to normalcy after that crazy Trump and his mean tweets. Instead, even Democrats are forced to admit that Biden is at best a serial groper. At worst, he’s as shameless a coverup artist as Hillary Clinton when it comes to misdeeds against women.

Also, Biden seems to have had a wee bit too much work done in the eyeball region, if this recent remote video appearance is anything to go by:

I’m against Botox, especially for men. I think it always leaves the eyes and face substantially weirder looking than before. For example: pic.twitter.com/Mo0GD3Gun8

On the one hand, looking directly into his huge, almost unblinking eyes will seriously creep you out. On the other hand, it’s impossible to look anywhere else.

Looks aren’t everything, of course, so let’s not forget that Biden’s brain — never his strongest asset — seems to have turned to porridge in recent months. In this video, Biden is trying and failing to use notes to help him answer a softball question.

Even while reading from notes during a LULAC virtual town hall today, Joe Biden can’t keep his thoughts straight:

"so workers don't have to leave work to uh to get uh uh to be fired in order uh when they get sick to be able to continue to live" pic.twitter.com/UCV3eaXk0o

Is it any wonder that Democrats are starting to wonder if they’ve bought a pig in a poke, and just how to pawn him off on somebody else?

Just as bad for the Dems on the electability issue, a new poll shows that young voters — a key party constituency — just aren’t that into the 77-year-old who first ran for president before any of them were born. The Harvard Kennedy School of Government’s Institute of Politics poll shows that “only 34 percent of Americans aged 18 to 29 say they have a favorable view of the former vice president,” with just 8 percent at “very favorable.” Nearly half — 47 percent — said they have an unfavorable view of the former veep.

Trump voters might skew older, but they’ll crawl over broken glass to vote for POTUS in November. A recent Emerson poll found that Trump has a 19-point advantage in the enthusiasm gap, 64%-45%.

After New York canceled its primary vote last week, we learned that while it would be both risky and difficult, it is still possible for Democrats to nominate someone other than Biden:

As of April 27, the former vice president has 1,305 of the 1,991 delegates needed to clinch a first-round coronation at the party’s convention. New York offered 320 delegates up for grabs, 274 pledged to the primary winner; a prize that would have brought Biden closer to the nomination.

If New York’s decision triggers other states to cancel their own primaries, it is entirely possible that Biden could arrive at the Democratic convention without a guarantee of the nomination.

Larger states with upcoming primary votes include Georgia, New Jersey, and Pennsylvania, plus a few medium-size states like Maryland, Indiana, Kentucky, and Lousiana. Pennsylvania and Indiana have already delayed their votes, but if they and a few others like them decide instead to cancel as New York did, then that would be a clear indication that the DNC has decided to shove Biden out onto an ice floe for an ignominious retirement from presidential politics.

Whatever happens — and even now it seems unlikely-but-not-impossible that the Dems dump Biden — remember the seriousness of the office Biden seeks to hold, that Democratic voters have all but made him their nominee, and that this is the man they have nearly chosen:

Joe Biden is not well.

Biden simply isn’t fit to be president. Maybe the nicest thing you could say about his fellow Democrats is that they’re starting to realize it, too.