Republicans caved last week, with everyone from Mitch McConnell to Sean Hannity issuing veiled threats and shaming people for not getting vaccinated. McConnell mentioned lockdowns and Hannity spent part of his monologue pushing vaccines. The media and Democrats, redundant for sure, have been stomping their feet for weeks now, blaming vaccine “hesitancy” on right-wing media. Even Greg Gutfeld casually mentioned having been vaccinated last week.

MSNBC host Mika Brzezinski accused Fox News of mocking the vaccine and blamed the right for misinformation. She also asserted that the unvaccinated are followers of Donald Trump and Newsmax. That’s rather absurd, as the former president sees Operation Warp Speed as a significant achievement and has been vaccinated himself, despite recovering from COVID-19 before the election. The left has removed him from every platform but wants him to come out and tell his supporters to get vaccinated. Trump did just that in March of 2021.

If Republicans were a slobbering monolith that did whatever Trump directed them to do, they would have lined up for vaccines the day after he said it. Yet, here is David Frum in The Atlantic making an easily disproved statement:

In the United States, this pandemic could’ve been over by now, and certainly would’ve been by Labor Day. If the pace of vaccination through the summer had been anything like the pace in April and May, the country would be nearing herd immunity. With most adults immunized, new and more infectious coronavirus variants would have nowhere to spread. Life could return nearly to normal.

Experts list many reasons for the vaccine slump, but one big reason stands out: vaccine resistance among conservative, evangelical, and rural Americans. Pro-Trump America has decided that vaccine refusal is a statement of identity and a test of loyalty.

Even with the Delta variant, the pandemic is essentially over. The virus that causes COVID-19 will be a fellow traveler with humans for the foreseeable future, just like influenza. Israel, which had one of the most effective vaccine rollouts and has comprehensive patient histories due to a nationalized system, started experiencing the Delta variant earlier than the United States did. As of the end of June, 50% of new positive tests were individuals who were fully vaccinated. It is unclear what Frum means, given this data and similar information from the United Kingdom.

The vaccines appear to remain effective at limiting the severity of illness from COVID-19, but they are not stopping it from circulating. Even commentator Scott Adams, one of the most pro-vaccine Trump supporters online, is asking whether the injections are therapeutic, similar to the flu shot, or a vaccine like the ones for chickenpox and the measles, which provide sterilizing immunity. This is a legitimate question and should be one that our public health experts discuss.

Related: COVID-19 Vaccines: An Immunologic or a Therapeutic Intervention?

According to CDC tracking, the lowest vaccination rates are in the African American community. Hardly a massive reservoir of Trump supporters. It is not even close, and they are not listening to Republicans: 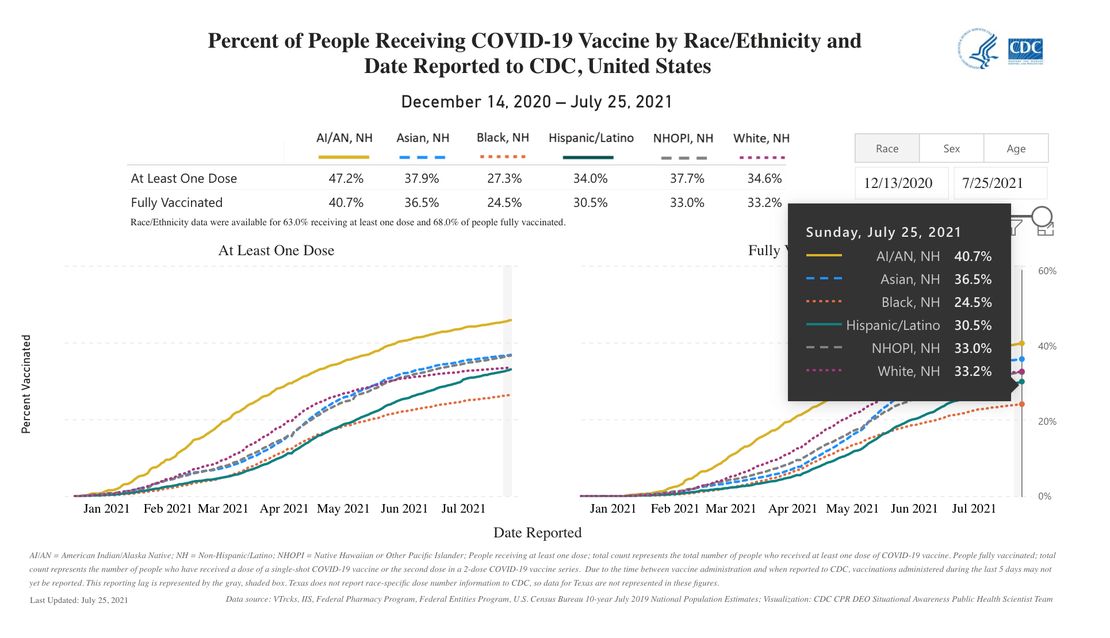 Despite Frum’s assertion, there is also no significant difference in new case rates between non-urban areas where Republicans win and metropolitan areas:

Recovered patients seem to put a brake on new infections. Among more than 50,000 Cleveland Clinic employees, recovered patients are generally not testing positive, regardless of vaccination status. The Clinic’s study remains in preprint, but in an article from Emory University, researchers asserted that the immune response in this cohort could give researchers new vaccine targets that are not on the spike protein.

Related: Quick: Read This Study on Recovered Immunity Before It Gets Memory Holed

The real issue is that the entire debate about COVID-19 vaccinations is not honest. On Sunday, Dr. Fauci was on television having another tantrum. In an appearance on CNN’s State of the Union, he talked about the need for a booster shot of the same vaccine that the Delta variant is evading, which makes no sense. Fauci told the host that he’s still considering recommending that the vaccinated continue to mask. He claimed that new positive tests are predominantly among unvaccinated Americans.

How does Fauci think this is an effective appeal to get people vaccinated? We know the vaccinated and the recovered are not getting serious illnesses if they are infected. This is like punishing the whole class because one student misbehaves. Republicans should in no way support this type of rhetoric. Instead, they should express confidence that the vaccine prevents severe illness. Those who have taken it or recovered should feel confident resuming regular activity.

Instead of calling people “vaccine hesitant,” Republicans should explain the real reason people are not getting vaccinated right now. For most, it is not because they believe there are microchips in them. Perhaps they know people who had significant reactions. I know I do. Maybe they have had COVID-19 and are following the science on natural immunity. That is my reason for not getting it now and the reason for the vast majority of unvaccinated people I know.

Republicans should really have more confidence in their voters. Even MIT noted that vaccination hesitancy is based on knowledge, research, and data, whether on the political right or the political left. We are also the party of personal responsibility and like to make informed decisions. Orders, edicts, and threats are not going to work. Persuasion and honest answers to legitimate questions might.