In his monologue on Tuesday night, Tucker Carlson suggested that a way for parents to regain control over K-12 education is to place cameras in classrooms. On Wednesday, he shared that there was quite a bit of backlash about his comments. That should give every parent pause.

As a parent of a certain age, I am old enough to remember when teachers welcomed parent participation in the classroom. Research shows that parental involvement in education leads to better outcomes for children. My mother and my friends’ mothers volunteered to be room mothers. They rotated into the classroom several times a week, helped with activities, and even assisted children who needed a little more help with classroom assignments.

When my children were young, there were room parents instead of just room mothers. This development was terrific, and having dads in the classroom periodically was a great addition. Life had become a little more complex, and not as many moms stayed home. But many of us still made the time to volunteer, and it became a team effort between both parents.

The benefits of this level of interaction should be obvious. Regular informal exchanges built trust between parents and teachers. As a parent, it was much easier for me to support teachers and administrators in their decisions to coach, counsel, or even discipline my child. That kind of consistency between home and school is essential, especially when children are young and learning boundaries.

The world has changed even more since my children were young. More households depend on two incomes, and commutes are often longer. The pandemic changed many things, not the least of which is parental concern over the curricula taught in many districts in the country. As much as the concern over critical theories and radical gender ideology is framed as a “right-wing conspiracy theory” by the media, it is an apolitical movement on the ground.

The Free to Learn coalition notes in a new ad campaign that in school districts where administrators refuse to provide information about classroom curricula, parent suspicions increase. The nation’s largest teachers’ union also posted several references to incorporating critical theories, social justice, and political action in the classroom. When the backlash came, the National Education Association (NEA) deleted its references to those topics.

Related: What Are They Trying to Hide? CRT Resolutions Mysteriously Disappear From Teachers Union Website

The public’s reaction to the NEA put the execrable president of the American Federation of Teachers, Randi Weingarten, between a rock and a hard place. The second-largest teachers’ union had decided to invite Ibram X. Kendi to speak at its conference. Kendi believes that past discrimination can only be remedied by discrimination in the present. His theories boil down to racial essentialism and revenge. Weingarten had the choice to cancel his appearance and be called a racist or go ahead with it and further alienate parents. She chose the latter.

The Zinn Education Project (ZEP), named after the author of A People’s History of the United States, is urging teachers to ignore state laws passed to prevent the use of critical theory pedagogy in the classroom. The demand sounds benign enough: 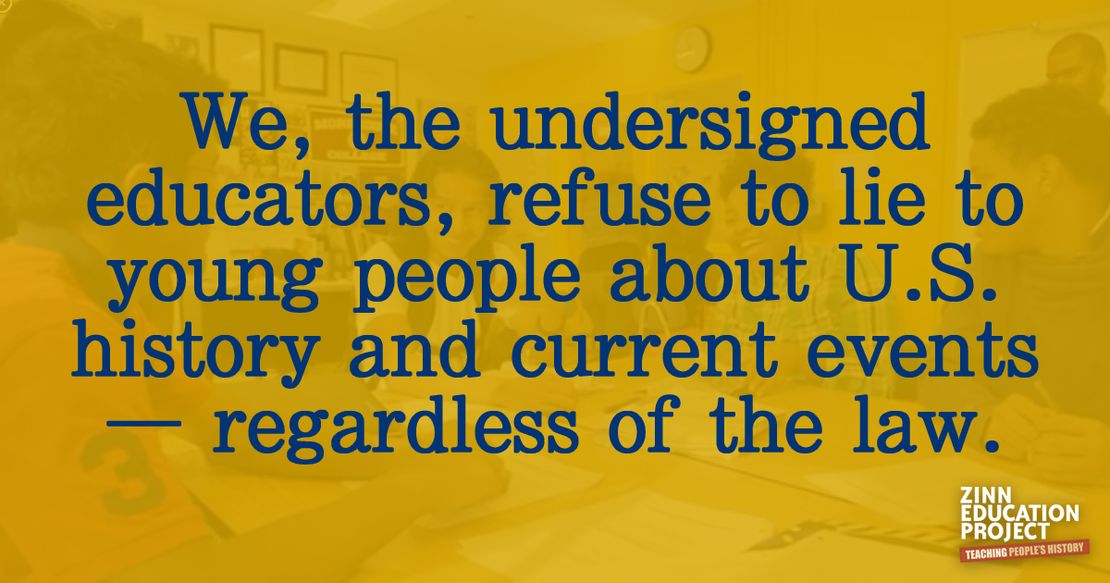 At least until you understand that Howard Zinn was a member of the Communist Party and depicts America as a terrorist state. ZEP is just as radical:

In 2008 he [Zinn] helped launch the so-called Zinn Education Project (ZEP), a collaboration between Rethinking Schools and Teaching for Change. The initiative was designed to incorporate Zinn’s writings and worldview into all aspects of K-12 school curricula.

The ZEP lessons reinforce Zinn’s presentation of the United States as redeemable only through a socialist revolution. Major historical events are replaced with instances demonstrating relentless oppression.

Taken together, and given the objections to anti-American and identity-centric curriculum from parents across the country, trust in the public school system is irrevocably broken. The only way to restore it is transparency. There is almost no reason a teacher at the elementary level should object to cameras. Parents would expect to see foundational instruction in math, science, reading, and social studies along with specials like art. What most parents do not wish for and will not tolerate is radical gender ideology that instructs children in sexual behavior and asserts that they may choose their gender.

I can observe my Great Dane at the groomer and when we board him. Parents can install a nanny cam to monitor the care of their children. Daycare franchises also offer them. Teachers’ unions that refused to return to the classroom gleefully went on camera all last year to teach students on Zoom. Why not use cameras now?

A refusal now seems disingenuous and hypocritical. Children do not become wards of the state when they enter a government-run school. Parents have the right to know what teachers are teaching their kids.

Teachers who are offended by this article should select better leaders and police your own. The meme of “the people on the frontlines act in good faith” is dead. Our intelligence and federal law enforcement agencies taught us that. If an organization is rotten at the top, the rot extends through the entire organization. A large segment of America trusts the public education system about as much as the teachers’ unions’ trained Marxist friends in Black Lives Matter trust the police. Law enforcement officers on the frontlines wear cameras. Teachers can be held accountable in the same way.

And in the end, it may be in your own best interest as a teacher. I spent time in my child’s classroom and had more than a cursory relationship with the teachers, which is not as common now. The trust I built with teachers allowed me to remain objective and support them when there was a conflict with my child. That is not the case anymore for many parents. Much like a cop who is accused of excessive force, someday you may need the video to refute a charge.