In recent weeks, the backlash against the lens of critical theories in K-12 education has reached new levels. There is a constant drumbeat in the media that objections are somehow related to a preference for eliminating obvious warts in our national history. Nothing could be further from the truth. Kellie Miller, Director of the SchoolHouse Rights Project, has been on the frontlines of the fight to rid our public schools of curriculum based on critical theories and has some sage counsel for parents new to the battle.

First, it is crucial to define the type of curriculum discussed under the umbrella of critical theories. There are not going to be materials or books titled Critical Theory. Critical theories demand a lens that labels children based on their immutable characteristics. It then assigns them motivations, behaviors, societal roles, and historical guilt based on these characteristics.

Recommended: Police Arrest 2 Parents Who Spoke Out Against CRT, Transgenderism at Loudoun School Board Meeting

The critical theory that is the current lightning rod in the media and viral videos of school board meetings is critical race theory. Perhaps this is because it encourages neo-segregation and racial essentialism, antithetical to the American ethos agreed upon in 1964. However, critical theories apply to sex, sexual preference, gender identity, immigration status, indigenous status, disability, and even body morphology. The intersectional view that combining these characteristics determines your place in the Oppression Olympics governs the lens used by critical theories.

Miller is currently assisting parents all over the country to try and navigate the path to ridding this shallow and detrimental curriculum from K-12 schools. She paints a very complex picture of how critical theories can invade a classroom. Sometimes, an individual teacher brings it into the classroom, and teaching it may not otherwise be pervasive in the school district. Other times schools bring in outside consultants with names like The Equity Collaborative to train and coach teachers and administrators. In other cases, districts purchase a complete curriculum developed by an outside company.

Parents can identify most of the district-wide programs that push critical theories by the language they incorporate. When they receive communications or see policies with the words diversity, equity, and inclusion, it is a red flag. Diversity is not intellectual. It is based solely on race and ethnicity. Equity refers to outcomes, not opportunities, and often encourages lowering performance and behavior standards for particular identity groups. Inclusion requires affirming ideas and concepts not based on fact or reality under terms such as “lived experience.”

The pernicious part of the critical theories is that they are taught as normative facts and truth. According to Miller:

“There is an inherent gaslighting that occurs within critical race theory when it is taught as the truth that censors those who disagree by asserting dissent is proof of racism.”

No one is objecting to the age-appropriate assignment of essays or books by critical theorists. Students may read the ideas of Thomas Jefferson, Abraham Lincoln, Karl Marx, Mao Tse Tung, or Adolf Hitler in the course of K-12. Likewise, there is little harm in them hearing the ideas of Ibram X. Kendi, Robin DiAngelo, and Nikole Hannah Jones.

The problem is critical theories are not taught as ideas to explore and think critically about. Instead, the ideas are presented as facts and truth. As an example, many schools put out material about the death of George Floyd. Often they hold this case up as an example of systemic racism or racial hatred. Yet, no facts in the case support that view. Despite being found guilty, Officer Derek Chauvin was never charged with or convicted of a hate crime. Even Minnesota Attorney General Keith Ellison said there was no evidence to support that charge. Yet, it is being taught in current events as if his actions were based on racism and hate, to children as young as five.

Miller says legislation to capture this subtle difference of teaching critical theories as fact and eradicate them will be challenging. However, it may be possible to litigate using specific curriculum examples that run afoul of the Civil Rights Act of 1964. Title VII of the Act, which governs employment, has a rich body of precedent upholding the concepts of reverse discrimination and a hostile environment. There is also a deep body of precedent about First Amendment protections against compelled speech.

According to Miller, education is governed under Title VI of the Act, which does not have as much precedent. However, Title VI lays out similar requirements for educational institutions that receive federal funding that Title VII does for employers. Miller is working with parents in Williamson County, Tennessee schools to remove the Wit and Wisdom curriculum. Here are some examples from a second-grade curriculum that spends nine weeks on the civil rights movement in Reading and English that may be deemed to create a hostile environment: 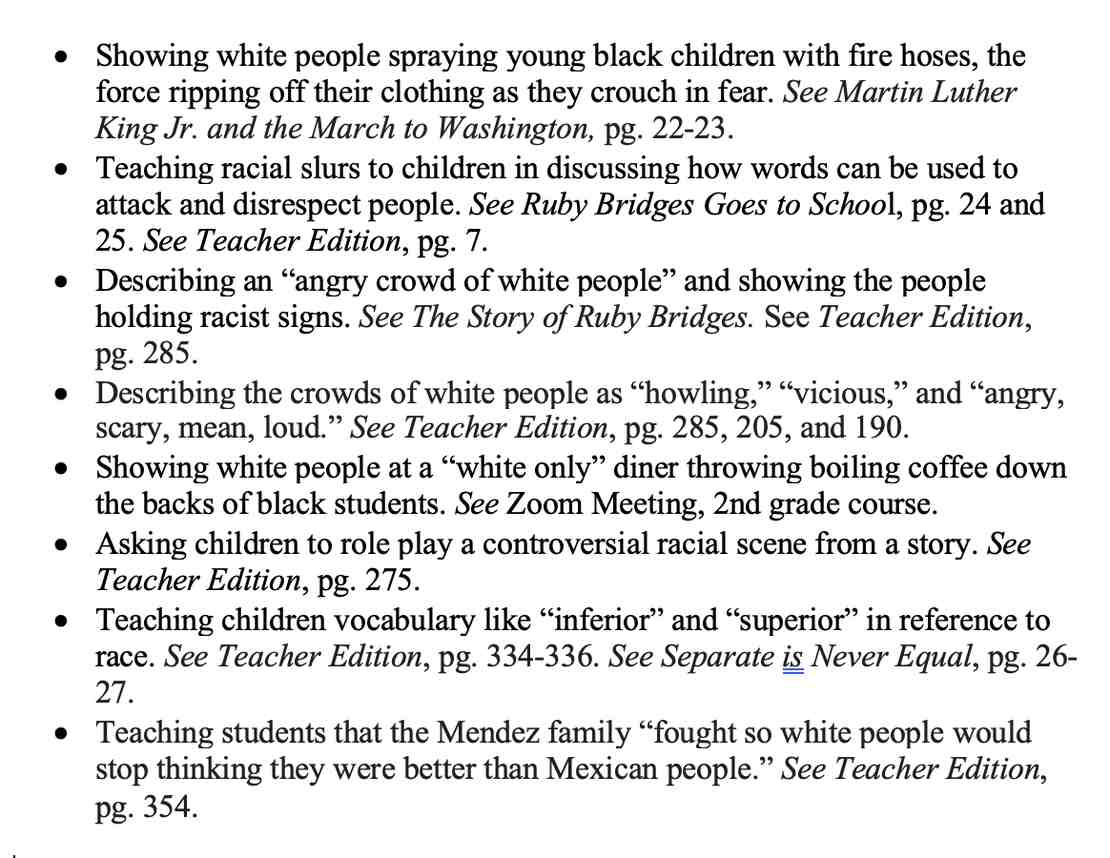 Each case is fact-dependent, but critical theory slaps identity labels on all children. For example, a curriculum like Equity Math asserts that teachers cannot expect black and brown children to show their work or come up with correct answers. This view is every bit as discriminatory as history content that assigns historical guilt for the horrors of slavery and segregation on white children.

While litigation is a viable and promising option, Miller has some advice for parents before reaching out to an organization such as SchoolHouse Rights to fight critical theories in the classroom:

According to Miller, the challenges in the K-12 curriculum are novel, and public opinion will play a significant role. Her observations are that this could be an apolitical movement, as she has worked with parents across the spectrum. Parents understand the concepts are a damaging form of indoctrination but can’t always put a name to the problem.

The pandemic brought the issue of critical theories to the forefront with distance learning. However, the concepts have been creeping into the system for several years. As a result, Miller predicts that removing critical theories from K-12 education is likely to be a long-term project requiring parents to stay vigilant and communicate with one another. There are several groups helping parents organize. Two potential options are No Left Turn in Education and Moms for Liberty.

However, if grassroots organizing and petitioning at the local level stalls or meets resistance, moving to legal action through a group such as SchoolHouse Rights is the next step. Attorneys like Miller will be working on setting precedents under Title VI to make the fight easier for parents at the local level in the future.