Was Fauci Incompetent or Dishonest? Either Way, in the Final Analysis, Lives Have Been Ruined

It would be an understatement to say I am not a fan of Dr. Anthony Fauci. For months beginning in Spring 2020, I have written about features of the COVID-19 pandemic management that seemed either inconsistent with current research, in opposition to the data coming from other countries, or completely divorced from the traditional management of a respiratory virus. My lockdown objections were on record, starting with my governor’s first stay-at-home order in Georgia.

Then a glaring error in the entire lockdown thesis emerged in September. A doctoral candidate in epidemiology from the University of Waterloo in Ontario, Canada, Ronald B. Brown, Ph.D., questioned how mortality data was presented early in the pandemic. On March 11, 2020, Fauci told Congress that COVID-19 was ten times more deadly than the seasonal flu.

This claim was a departure from predictions made by Fauci and former CDC Director Robert Redfield in late February. They predicted the mortality impact of COVID-19 would be between that of the seasonal flu and pandemic flu in the New England Journal of Medicine. Then on March 11, it became something akin to the bubonic plague, and the cancelations began in the NBA and other large gatherings. How this happened was either a screw-up of epic proportions or intentional. In the end, it doesn’t really matter because the resulting chain of events ruined lives, businesses, and is responsible for education deficits we will feel for decades to come.

One is called the case fatality rate (CFR), which means the number of people who die of a confirmed case of the illness. No tracking system or testing regime can catch all instances of a specific disease, so epidemiologists estimate what they call the disease burden. This calculation estimates how many people likely suffered from the illness but were never sick enough to seek medical care or be tested. Using the total number of estimated infections, they calculate the infection fatality rate (IFR).

By definition, the IFR will always be lower than the CFR. For example, as of today, there have been approximately 33.3 million confirmed positive tests for COVID-19. The last estimate of the disease burden for COVID-19 from the CDC projected that the total number of infections is 4.3 times the confirmed cases, or approximately 142 million cases. There have been about 595,000 recorded deaths, though this is likely an overestimate based on hospital record reviews. However, these totals would yield a CFR of 1.8% and an IFR of 0.4%.

The commonly accepted IFR for the seasonal flu is 0.1%. During his testimony on March 11, 2020, Dr. Fauci told members of Congress that the mortality rate for COVID-19 was 3%. He then said that if the statistic included mild cases, it would likely be around 1%. This number is the CFR. This projection would be ten times deadlier than the generally accepted IFR of the seasonal flu of 0.1%. For comparisons, you need to use either the CFR or the IFR for both instances. Fauci crossed them in his analysis.

Dr. Fauci made this error in his e-mail communications as well in at least one case. He told Sumathi Reddy, a health columnist from The Wall Street Journal, on March 2, 2020, that COVID-19 was twenty times deadlier than the seasonal flu. 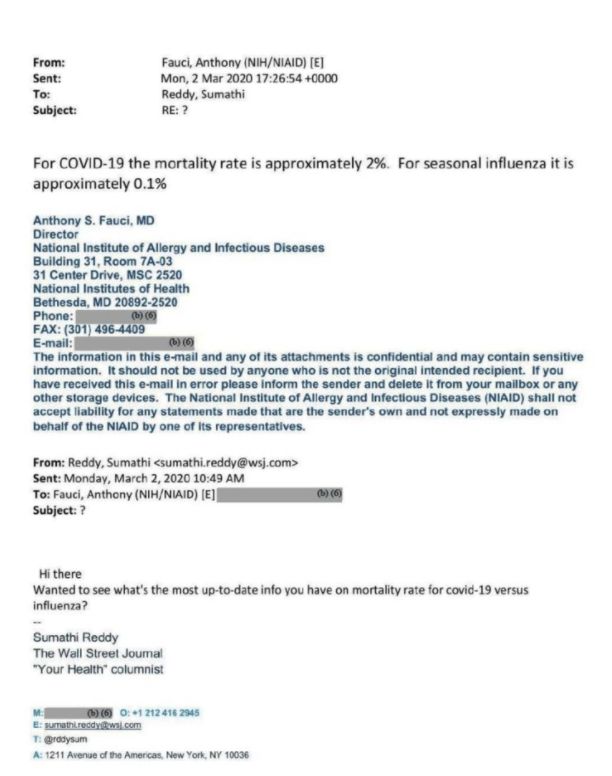 The other clarification that Fauci did not provide Congress, or this reporter, was the fact that the mortality risk was exceptionally age-stratified with the mortality risk for the elderly being significantly higher. This pattern was evident from early in the pandemic.

Somehow, COVID-19 became the virus that a perfectly healthy person could give you, and it was suggested that everyone had some equal risk of dying. One recent poll showed that a majority of Democrats, who tend to consume legacy media more than Republicans do, thought the risk of hospitalization for COVID-19 was somewhere around 50%. In reality, it is under 5% and much more common for the elderly. Because the fatality rate was perceived to be ten times that of the seasonal flu, lockdowns and school closures began after Fauci’s testimony.

If you were sentient during the H1N1 pandemic in 2009-10, it might shock you to know that the CFR of that pandemic flu was 2-3%. It was also far more deadly to children and adults. As of December of 2009, the year the virus emerged, 87% of deaths occurred in people age 64 and younger, including 11% occurring in children 17 and younger. This trend is the exact opposite of COVID-19 and all seasonal flu. Yet, many Americans lived through H1N1 and never even knew it happened. According to Brown:

The CFR of COVID-19 is approximately 1.8% using the broadest possible definition of a COVID-19 death as currently reported. How in the world did Americans get fooled into destroying the economy, busting out the federal budget, and creating a mental and educational health crisis for our children? Because of the conflation of two very different statistics by an octogenarian lifelong bureaucrat whom the legacy media elevated to the Oracle of Delphi because they saw him as a foil to President Trump in an election year.

The legacy media’s failure to be curious, provide Americans the accurate data they needed to assess their risk, and willingness to engage in scientism is a catastrophic failure. Watching them try to cover their malfeasance and spin the recent e-mail leaks as good news would be funny if it had not devastated so many lives. Americans should never trust these outlets again.

Once state and local leaders took a position, they dug in to justify what they had done on both sides of the mitigation issue. Nationwide, there is no significant difference in pandemic results between those states who lived under Branch Covidians with mask Karens hectoring and accosting them in Walmart and those that opened.

In fact, those that opened have more robust economies, net gains for in-migration from other states, and kids who went to school and played sports. They also celebrated milestones, mourned their losses, and maintained the very human connections we all need. In the coming decades, the differences will be noticeable because the benefits of liberty and personal responsibility always are.

President Biden should ask for Dr. Fauci’s resignation today. Fauci’s failure to present mortality statistics correctly has caused what will be, in some cases, irreparable harm. And in the future, we would do well to never let entrenched bureaucrats run a national response to anything. Please bring in the real and relevant experts and task the agencies with implementing their data and research-based recommendations.