The Way to Prosperity Has Many Paths

PROSPERITY, Pennsylvania — How this little village earned its name is rooted in an old tale featuring a common last name, one-in-a-million odds and a likely exaggeration about how many settlers were attracted to the middle of the frontier.

“It was founded in 1848 by a gentleman named Robert Wallace,” explains Clay Kilgore, executive director of the Washington County Historical Society. “When he got the tract of land, he built a house on one of the lots he had laid out and then began selling more lots. It was not exactly the most favorable location for a town. There were a few Native American trails that went down by it, but not to it.”

“He really played it up as a sound place for people to kind of make a good living, and the opportunity was there for the taking,” Kilgore continues. “The idea was he was going to call it Wallaceton. When he sent his application in for a post office, he boasted how many lots were being sold so quickly.”

Kilgore is skeptical it was as robust as Wallace’s application read.

He says: “So, the story goes the government came back and told him there was already a Wallaceton in Pennsylvania, so they could not give him that name. But because if, as he said, the lots were being sold so quickly and settlers are coming in as fast as he reported, their suggestion was he call it Prosperity.”

And, supposedly, that’s how Prosperity got its name.

The post office Wallace coveted still stands. It does not bear his name, as he so hoped for, but the name Prosperity is just below the “United States Post Office” sign. It is an ancient and charming building, where postmasters have served long careers behind the service window and where the brass post office boxes still greet the locals picking up their mail.

Just across Prosperity Pike is Marie Phillips’ home, an expansive farmhouse with a broad, latticed front porch, a side porch, shutters on each window and a neatly cared-for front yard. Earlier this year, a local newspaper wrote about the fanciful collection of gnomes in her garden. The 90-year-old lifetime resident said she sits most of the time in the back, enjoying the rolling pastures of farmland.

Her late husband was the town’s postmaster for years.

“It’s just a nice little town. Not much has changed. We all got along well here when I was a child, and that continued when I married and had my own children,” Phillips explained. “We just did most everything any little town would do and really never felt we wanted for anything that wasn’t right in front of us. We played in our yards. The community had parades. And we went to church.”

It remains unknown whether Phillips’ parents understood how rapidly the world was changing in the months leading up to their daughter’s birth here in November 1929. On Jan. 13 that year, frontiersman Wyatt Earp died. Two days later, Martin Luther King Jr. was born. Earp was a famed lawman and illustrious gunfighter, and King obviously grew up to become a civil rights legend.

That was also the year Herbert Hoover was inaugurated; Babe Ruth hit his 500th home run, the first Academy Awards ceremony was held; Vatican City became an independent sovereignty; Jacqueline Bouvier Kennedy Onassis was born; and the stock market crashed, spiraling the country into the worst economic downturn in history that would last until Phillips was 10.

Nothing was left unmoored. Our culture was on fire. Civic values were shifting. And the world’s economy had just collapsed — all before Phillips was born in this tiny village on the edge of Washington County.

Prosperity means different things to different people. Its importance is determined by not just geography but also popular culture. Is there a trade-off if individuals decide on society’s newest measure of success? Sure. But no one decision on how you, as an individual, measure prosperity is right or wrong.

For some, that pursuit of good fortune means the ability to provide themselves and their family shelter and food; a decent education, the dignity of a good job; access to health care; a place to practice your faith; and having all of your family near you.

For others, that satisfaction means a path to power; a demanding career and the lucrative bonuses that come with it; the ability to purchase what you want when you want it; a social media profile that influences popular culture; and living in the biggest house in the best neighborhood.

Neither is right or wrong. But you have to wonder: If the town of Prosperity were founded today, would it have to look like the latter to be granted that name, or would we still have enough room in our culture to accept all kinds of prosperity? 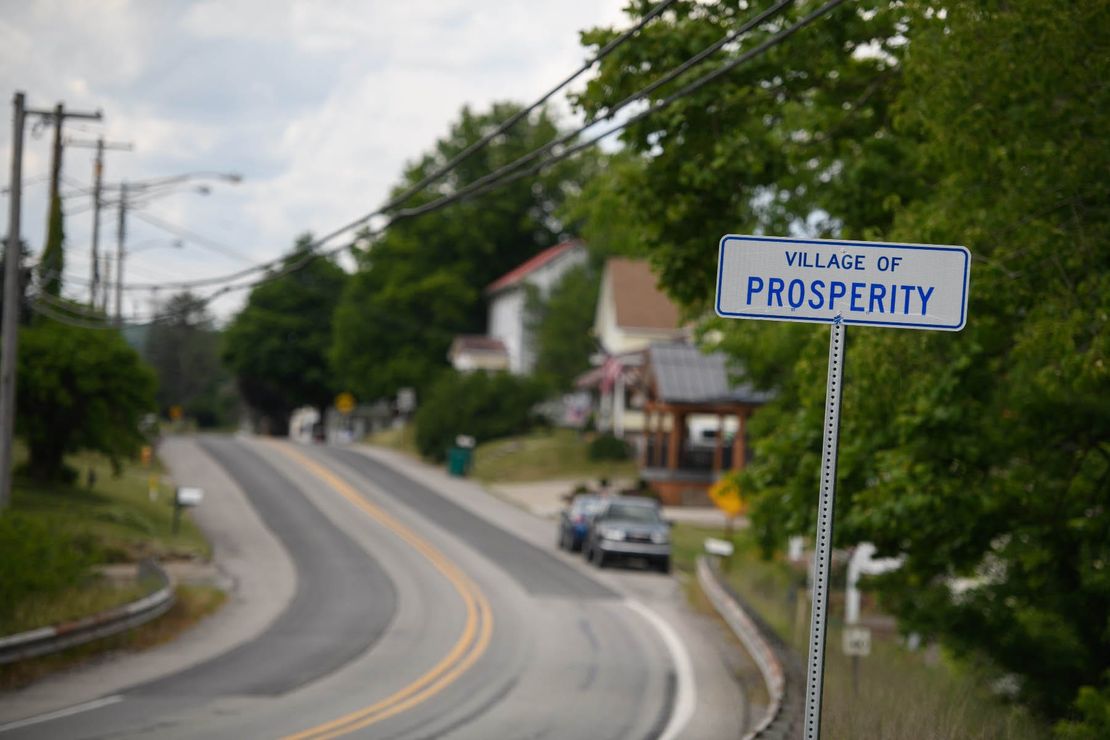 The sign for the village of Prosperity sits along state Route 18. Photo credit Justin Merriman.