In a news conference that aired live on Rumble, Facebook, and Twitter, Florida Gov. Ron DeSantis announced the immediate suspension of Hillsborough County state attorney Andrew Warren for consistent refusal to enforce certain laws. Accompanied by county sheriffs and law enforcement officers, DeSantis said Warren has publicly put himself above the law, citing Warren’s announcement that he would refuse to enforce any Florida laws limiting abortion in the wake of the Dobbs decision, laws against allowing children to undergo mutilating surgeries, and a consistent record of charges not being brought in violent crime cases.

A few hours later, Save America JFC, a joint fundraising committee on behalf of Trump’s Save America and the Make America Great Again PAC, sent out a fundraising email with a personal note from Donald Trump, echoing DeSanitis’ call to get rid of government employees who refuse to obey the law.

“When I make a promise, I keep it, ” Trump wrote. “I told you I would DRAIN THE SWAMP and purge Washington of woke bureaucrats, and that’s exactly what Schedule F accomplishes.”

“I implemented Schedule F so that Presidents could have the ability to FIRE federal employees who were BYPASSING democracy for their own benefit,” he added. “These employees are doing a disservice to America and are the very Swamp creatures that we’re trying to get rid of.” [Emphasis original]

In October 2020, Trump signed an executive order reclassifying some 50,000 “policy-determining, policy-making, or policy-advocating” jobs, removing protections that made it nearly impossible to fire them. Joe Biden rescinded the order when became president. 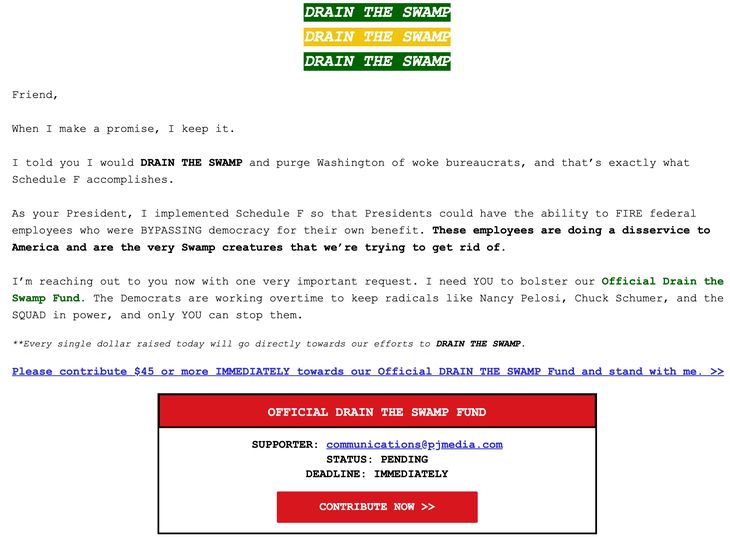 It should be noted that while Trump accomplished a great deal during his term as president — including appointing a slew of conservative judges who will alter the courts for decades to come — he wasn’t able to make much headway in draining the swamp. The executive order was a great start, but it came too late in his presidency. As a result, the FBI, the DOJ, and the U.S. military are still run by leftist ideologues who care more about appeasing the woke mob than protecting the country. And this week we learned that the IRS is stockpiling millions of rounds of ammo — and even machine guns. While Trump had the best of intentions, he ultimately wasn’t able to drain the swamp in any meaningful way before leaving office.

Related: The D.C. Swamp – A Place Where Only Leftists Like Sussmann Get a Jury of Their Peers

With DeSantis’ announcement today, he declared war on woke leftists in government who are “bypassing democracy,” to use Trump’s phrase, and is doing something about it.

The left started its long march through the institutions more than a half-century ago unimpeded and, for the most part, undetected by the vast majority of Americans. Trump succeeded where other Republican presidents had failed — in drawing attention to the swamp and calling out the entrenched government basement-dwellers who more often than not have more power than elected officials. DeSantis is picking up where Trump left off and taking it a step further by dismantling the swamp in Florida. Let’s hope other Republican governors have the courage to step up and drain the swamps in their own states. Trump and DeSantis are on the right track, but we’ve got a long way to go.