My good friend, Deplora Boule, who wrote “The Narrative,” a satirical novel about the threat that the biased media poses to freedom, sent me a note today after the weirdest election night anyone has ever been through. (Go buy her book now. You will laugh your behind off and I know you need that right now and it’s free for Kindle Unlimited. The fistfight she dreamed up in the newsroom between all the different genders is worth the price of admission.) One thing about the MAGA side is our ability to see the positive and humor in every situation. Trump’s fans are by nature prone to optimism and rooted in a world of truth and goodness. We believe that even in hard times there are things to be grateful for and ways to pursue our happiness. We don’t scream at the sky or turn to endless protests to make our feefees all better. DB, as I like to call her, wanted to remind you that every cloud has a silver lining and I agree with her whole-heartedly.

This is not to say we admit any defeat or believe the election is over, BUT, we want you to know that an outcome that we thought we didn’t want might be a boon for conservatism and it does no good to wallow in any kind of despair. The battle is for the strong, and we need to exercise our muscles with a little adversity now and then.

Here are DB’s top ten reasons and my commentary about why a Biden/Harris presidency might just be awesome for conservatives.

1. The courts and the Senate defend against the worst

DB: “Trump’s Herculean efforts to shore up the courts, combined with the War Turtle and Lindsey Graham 2.0 holding the Senate, have saved us from the worst Biden/Harris could have done: no packed courts, new states that would create four new Democrat senators, or millions of legalized illegals,” DB told me.

This is nothing but a win. There isn’t much to add to this. Every crazy piece of nonsense The Squad cobbles together to bankrupt this nation will die in the Senate. Hallelujah!

DB: “The complete and final disgrace and delegitimization of the Fake News Media and its polling adjunct is now a fait accompli.”

Not even Fox News will survive this. Their behavior on election night—wantonly calling Arizona and Virginia way too soon for Biden—has exposed what they really are: fake news. We can now feel free to hate Fox as much as CNN. I fully expect a Trump rally or something where the crowd is chanting “FOX NEWS SUCKS” very soon. Pollsters will be and should be roundly mocked and laughed at. They should all lose their jobs.

DB: “A fully unleashed President Trump with two-and-a-half months to go balls-out, exposing the Biden Crime Syndicate and getting to the root of the money behind the rioting.”

If you think Trump is unchained and unchecked now, wait until he has the freedom of a man about to be paroled. This is a man who has been through hell over false allegations and character assassinations and downright lies. Lies so big and so debunkable that any honest media should never have let Joe Biden get away with using them to smear Trump. The “fine people” hoax brainwashed half the country into thinking their president — who brought peace to Israel and funded black colleges — is a racist.  He and his children have been put through hell and those who know him say he never forgets and will get his hunk of flesh. It’s going to be epic. And imagine what he knows now, with his presidential privilege, that the American people will benefit from when he opens both barrels. Oh! This is going to be fun. Those of you who enjoy brawler Trump would get an early Christmas present.

4. The spectacle of a Biden inauguration

DB: “The hilarious spectacle of Joe Biden reciting the birthday song as he’s sworn in with a poop stain on his pants.”

I didn’t say it, DB did. But I can’t say I didn’t laugh. The gaffe master will be a lot of fun. Remember how fun the video montage of Sleepy Joe rambling about his hairy legs was? Trump was playing it his rallies. Biden is well-known for being extremely meme-able. Meme farms will grow and bloom. Meme farmers everywhere will rejoice at the bountiful crops. 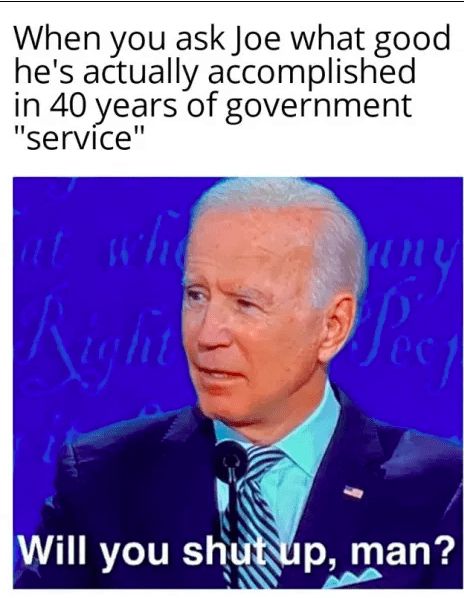 DB: “The hideous spectacle of the Wicked Witches of the House removing Biden from office and installing the trench harpy from California.”

Nancy Pelosi already admitted that her inquiry into the 25 Amendment to remove a president wasn’t about Trump. We can rationally deduce that she actually meant it was about Biden. Watching them try to replace him with Comma-La in the next six months will be extremely entertaining.

Pelosi Says 25th Amendment Move Is Not About Trump. Is It Preparation to Remove Joe Biden?!

6. Four years of pointing and laughing.

Winning elections isn’t the hardest part. Governing is the hardest part. And the Democrat Party is split up into two groups of people: moderates and far-left whackjobs who are not going to stop trying to take over the party entirely and implement their crazy ideas (like defunding police and sending social workers into dangerous situations). If Biden wins, it’s is going to be a sh*tshow of warring factions inside the party. And we’ll have the buzzkill button in the senate. Lulz.

DB: “Democrat voters realizing why Harris never even mustered 4% Democrat support while she was running in the primaries.”

Harris is extremely unlikeable. Even her own party doesn’t like her and rejected her immediately in the primaries. She’s sure to have a much bigger role in a Biden administration than Mike Pence does in Trump’s. But her dismal record on criminal justice and locking people up for smoking pot soured her for a lot of people who want actual systemic reform. She will be especially unpopular with antifa who want to defund the police. Harris was the police. She locked up a lot of people, some of whom didn’t belong in jail. Law enforcement reform should start with attorneys general like her. I think the anti-police faction of the party is going to turn on her and that will be popcorn-worthy.

There’s no doubt we will retake the House in 2022 whether or not Biden wins. The motivation for Republicans to take back control will quadruple after this morass of media-driven shenanigans that a lot of people see as disenfranchisement. The 2022 elections are going to be lit AF.

DB: “The great and awesome President Trump, having preserved America to fight another day, retiring to his own slice of heaven in ever-redder Florida where he can enjoy the lifestyle he richly deserves, tweet to his heart’s content, and continue to inspire the movement he created.”

Can you see it? I can. And it’s hilarious.

Drudge has abandoned us. Fox News has abandoned us. It’s time for Trump’s media empire that will wipe out Fox News as being the place conservatives go. It’s going to be epic. Trump is finally going to be in the position to be our billionaire who pours money into real journalism. We’ve never had one of those before. This could be the injection of support we have needed in order to break through the fake news narrative.

So, be of good cheer. Nothing is off the table yet, and we will keep fighting for a fair election, but if the “worst” happens, it’s not going to be that bad. Buck up, little camper!