Chinese Government Pushing All Lives Matter on Anniversary of Tiananmen

Thirty-one years ago today, The Chinese Communist Government decided that the protests in “天安门广场” — Tiananmen Square, named for the “Gate of Heavenly Peace” on the north side of the square — had gone on too long, that the “’89 Democracy Movement” could no longer be tolerated, and sent thousands of protesters and bystanders through the Gate of Heavenly Peace with guns and tanks, while arresting thousands of others throughout the country.

Afterward, the phrase “tiananmen” was censored, books and magazines were seized, and discussion was so repressed that many younger Chinese don’t even know something happened, and those who dare to speak of it at all simply say “The six-four incident (六四事件)” or just “8964” (八九六四).

The “Tank Man” At Tiananmen

The “Tank Man” — no one knows his name, or what happened to him, even today — is one of the most famous images in the world, but another image from the “June 4 Incident” always struck me as well. It was a picture of the improvised Statue of Liberty that the protesters erected in Tiananmen Square. 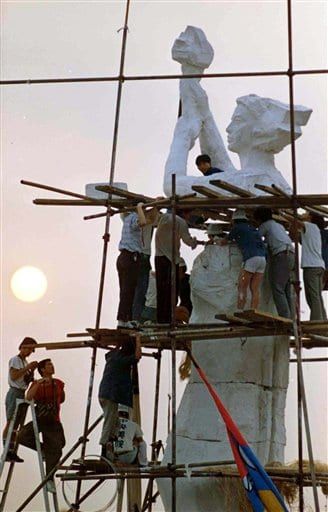 Students work to finish a styrofoam “Goddess of Democracy”, modelled on the Statue of Liberty, in Tiananmen Square, Beijing, on May 30, 1989. The statue is nearly 30 feet tall. (AP Photo/Jeff Widener)

Listen to Yang Jianli, a survivor of the “June 4 Incident”:

The Chinese Government Wants Us to Forget Tiananmen

Today, we’re hearing from China, but not about Tiananmen Square. Here’s the spokesperson for the Foreign Ministry today:

All lives matter. We stand firmly with our African friends. We strongly oppose all forms of racial discrimination and inflammatory expressions of racism and hatred. https://t.co/bRXvafrKZH

Forget for the moment that saying, “All lives matter” in the U.S. can get you fired. Here’s the spokesperson for the Communist Party, er, People’s Republic of China, on the anniversary of the massacre of thousands by their government, posting that all lives matter.

And don’t think it’s been forgotten.

On Tian An Men, Laurence Tribe, and the Mandate of Heaven

Tiananmen Square and Hong Kong — Has Beijing Learned Anything?