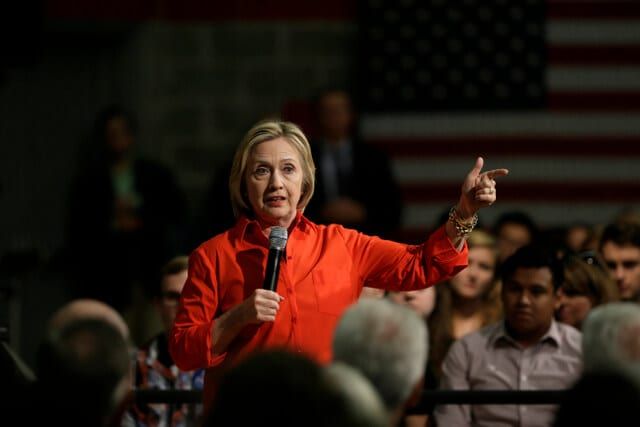 Hillary Clinton has one key part of the electorate already in the tank for her candidacy — millionaires and CEOs. In Congress, Democrats represent the richest and most unequal districts in America. While liberal pundits attack the GOP as the party of the rich, the real plutocrats are on the other side of the aisle.

How can this be? The Democrats rail against the abuses of the “one percent” and run on a platform of reducing income inequality, but the rich continue to support them. Liberals attack unregulated markets, call for unrealistic “green energy” proposals, and wish to force businesses to pay employees more by increasing the minimum wage or including new family leave or other benefits.

These policies do not actually hurt the rich or the owners of big businesses, however. Rather, they entrench big businesses at the expense of small ones. Established businesses can afford to pay a little more on the margins, but start-up companies cannot. The more government is involved, the more it can benefit those who have already achieved success. Politicians can benefit their supporters, their “cronies,” and so this practice is called “crony capitalism” or “cronyism.”

Hillary Clinton is a master of crony capitalism. Between 2009 and 2013, Russians assumed control over 20 percent of America’s uranium production by taking over the company Uranium One. Such a large merger required State Department confirmation, but luckily Uranium One’s chairman had contributed $2.36 million to the Clinton Foundation, and a Russian investment bank paid former president Bill Clinton $500,000 for a speech. Following these contributions, the State Department accepted the merger, as reported by the New York Times.

Perhaps it is less surprising then that more CEOs have donated to Clinton than to any Republican candidate in the 2016 presidential race. Indeed, 769 people who have given to her campaign identified their profession as “CEO” or “chief executive.” That is more than Jeb Bush (543) and Marco Rubio (127) combined. Cruz and Fiorina have only 109 and 33, respectively.

Clinton also beats her Republican rivals in polling among millionaires. In a head-to-head matchup of 750 Americans with a net worth of $1 million or more, Clinton beat Bush 53 percent to 47 percent. In the broad field, Clinton leads with 36 percent, Jeb is in second with 20 percent, Senator Elizabeth Warren (D-MA) has 8 percent, and Governor Chris Christie (R-NJ) follows with 7 percent.

Wealthy support for Democrats does not stop with Clinton, however. Over the last 25 years, rich donors have favored Democrats over the GOP to the tune of $416 million. Of the 32 biggest all-time donors in American politics, 20 favor Democrats, while only 6 favor Republicans, according to an analysis by National Review’s Jim Geraghty.

Soft contributions prove even more skewed. In The New Leviathan, Dr. David Horowitz and Jacob Laksin estimate that the Republican Party is outspent by a factor of 7-to-1 when considering the contributions of public and private sector unions, non-profits, left-wing activism, Wall Street banks, universities, and superfund contributors. Even Charles and David Koch, the notorious bogeymen Koch brothers, come in 59th on a list of top political contributors in the past 25 years — behind public and private sector unions.

There are also more Democratic millionaires in Congress, and Washington, D.C., is the richest area in the country. Big government does not hurt the rich, it helps them. In the wealthiest area of the country, Obama’s approval rating in 2013 was higher than anywhere else.

President Obama has even admitted that, under his presidency from 2009 to 2012, 95 percent of income gains have gone to the top 1 percent. While this fact invigorated Democrats to call for more distribution of wealth, it also illustrates that cronyism is rampant under a Democratic president.

Speaking of inequality, Democrats in Congress represent the districts with the highest income inequality. The Atlantic’s Michael Zuckerman suggests that this might explain why Democrats care more about income inequality, but there may well be a different connection. Supporters of big government may end up reinforcing a two-tiered society of the well-connected rich and the poor on benefits.

In recent years, mergers and acquisitions have spiked across the economy, while small businesses are shutting their doors — but nowhere more pronounced than in finance and health care. Two of President Obama’s touted accomplishments passed in 2010 have propped up the big, established businesses at the expense of lean entrepreneurs.

Dodd-Frank, which aimed to reform the financial system and end “too big to fail” — making sure that no bank was so big the economy’s stability relied on it — has entrenched big banks and bad business practices, according to a recent Harvard University study.

Before 2010, the Federal Deposit Insurance Corporation (FDIC) approved an average of 170 new banks a year — since then, it has only approved one. At the same time, government figures indicate the United States is losing one community bank or credit union a day. The Harvard study found that the cost of complying with Dodd-Frank’s regulations was the major reason behind small banks’ loss of profitability.

Larger banks, meanwhile, have seen a boost in market share. As Hot Air’s Ed Morrissey points out, Dodd-Frank has “proven the point of conservatives, who have consistently argued that regulatory expansion disproportionately impacts smaller players in any market.” In other words, cronyism hits the small guy at the expense of the rich — exactly the result one might expect when the party of the rich runs the government.

Similarly, the increase in regulations from the Affordable Care Act, also known as “Obamacare,” has sparked a wave of mergers and acquisitions. Just this year, Aetna acquired Humana, Anthem acquired Cigna, and the non-profit “co-op” plans are dropping like flies. Last year saw 95 hospital mergers and acquisitions, as reported by the Wall Street Journal.

Much like a monopoly, larger insurance companies and hospitals can corner the market, demanding higher costs and producing less value for their customers. The increases in regulation from Obamacare are pushing large companies to grow even larger, edging out potential competition. This is a bad situation for free choice and markets, and helps account for the increase in costs that average Americans have to pay for health plans.

If the Democrats are so connected to the rich, why do they support higher income tax rates? Forbes’ Steven Hayward has a canny answer — because these rates won’t hurt today’s rich. “Higher income tax rates will not touch the bulk of the fortunes of today’s plutocrats, for the simple reason that the great bulk of the accumulated wealth of Gates, Buffett, Silicon Valley and Wall Street consists of appreciated asset values — not ordinary income,” he writes.

If Democrats oppose economic inequality, Heyward challenges, “where is the call for a straight-up wealth tax?” In 1935, Huey Long proposed that no one should be allowed to keep any wealth beyond a certain limit — but even Bernie Sanders and Elizabeth Warren are not proposing such a radical scheme.

From Russian uranium deals to Dodd-Frank, Democrats are the party of the rich, the established. Republicans are the true insurgents. Now the success of outsiders like Donald Trump, Ben Carson, and Carly Fiorina starts to make a little more sense.