Christian Persecution, Not Guns, Is the Real UCC Story 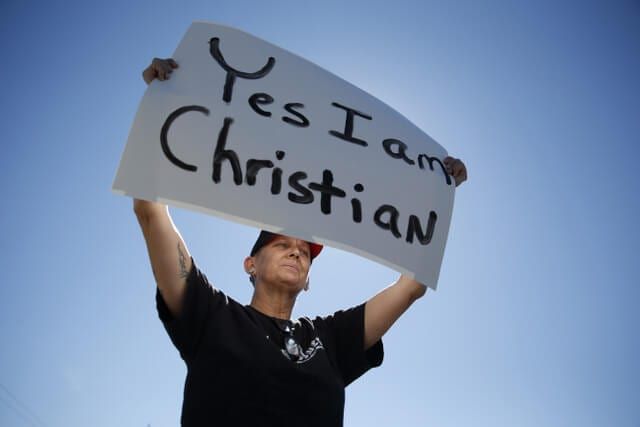 Last Thursday, a lone gunman at Umpqua Community College in Roseburg, Oregon, took the lives of nine people. The shooter targeted Christians for death and left non-Christians merely wounded, reports say. Despite this clear anti-Christian bias, President Obama used the occasion to push gun control rather than begin a “national conversation” about hatred toward Christians.

“This is something we should politicize,” Obama declared. “It cannot be this easy for somebody who wants to inflict harm on other people to get his or her hands on a gun.”

After the shooting of Michael Brown in Ferguson, MO, Obama called for a national conversation on race. After the racist massacre of a black Bible-study group in a historic Charleston church earlier this year, politicians, pundits and news outlets universally condemned the Confederate flag when the real culprit was a hateful racist, not the flag itself.

According to witness Anastasia Boylan, the Oregon shooter asked his victims about their faith. To Christians, he said, “Good, because you’re a Christian, you’re going to see God in just about one second,” Boylan reported. “And then he shot and killed them.”

Another witness, J.J. Vicari, told the same story. “Vicari said at one point the shooter told people to stand up before asking whether they were Christian or not,” NBC reported. “Anyone who responded ‘yes’ was shot in the head. If they said ‘other’ or didn’t answer, they were shot elsewhere in the body, usually the leg.”

As news of the shooting broke, Franklin Graham — son and heir of evangelist Billy Graham and president and CEO of Samaritan’s Purse — zeroed in on the real culprit behind this vicious attack.

“Persecution and targeting of Christians isn’t just in Iran or the Middle East, it’s right here in America,” Graham declared in a viral Facebook post. “The bold souls of Umpqua Community College who stood up to say they were followers of Jesus Christ were heinously gunned down with no mercy.”

Graham finished his brief post with a quote from Jesus, in John 15:18: “If they hate you, remember they hated me before they hated you.”

Anti-Christian Bigotry in the United States?

Many have poo-pooed the idea that anything resembling persecution happens in the United States, but this shooting should serve as a wake-up call that many Americans view Christianity — and religion in general — as something fundamentally wrong with the world.

“The shooter in Oregon clearly had anti-Christian motives, which I do think are becoming more and more pervasive, especially in highly secular areas such as Oregon,” Jay Richards, senior fellow at the Discovery Institute and executive editor of The Stream, told PJ Media in an email statement. Richards said that the shooter’s anti-Christian motives do not fully explain his actions, but they clearly contributed to his decision to engage in mass murder.

Richards pointed to “a strange mix of New Atheism and neo-paganism, especially in the Northwest,” where he lived for a long time. While the mixture of atheism and spiritualism seems impossible, Richards argued that they fit together well, and offered Carl Sagan as an example.

“My sense is that an evangelistic New Atheism is ultimately an unstable and spiritually arid territory for most people, so that even many atheists inconsistently adopt pagan and pantheistic spiritualities to fill the void,” he explained. While the ideas may not be consistent, a “strident anti-Christianity” pervades the movement as a whole, Richards argued.

Phil Cooke, a filmmaker, media consultant and co-founder of Influence Lab, also mentioned the tension between faith and science, exacerbated by the so-called New Atheists, as a cause behind anti-Christian sentiment.

Cooke criticized both Christians and atheists who argue vehemently against one another in scientific debates. “As a result, we criticize, demonize, and berate the other side, when we should be working together to discover the vast mystery of what it is to be human,” he told PJ Media in an email statement.

The Power of Social Movements

The filmmaker also pointed to the removal of the Bible from public schools as a strong starting point for anti-Christian bias in America. “This generation isn’t just ignorant of the Bible, but for the most part is completely misinformed about what it is, and how it’s influenced the world we live in today.”

Cooke emphasized the impact the Bible has had on history, and warned what will happen if people forget the scriptures. “To understand Western art, novels, music, law, and even science, you have to have a working knowledge of the Bible,” he declared.

“Even Richard Dawkins, who hates Christianity, has said that ‘a native speaker of English who has never read a word of the King James Bible is verging on the barbarian,’” Cooke said.

As the American Thinker’s Fay Voshell has argued, many Americans choose to stereotype Christians — or religious believers in general — as “inhibitors of progress.” President Obama’s rhetoric against those who “cling to their guns or their religion” also fits with his constant reminders of the Crusades and Inquisition, painting traditional Christians both today and historically as a hateful group.

Voshell argued that this stereotyping represents “the first stage” of persecution. Next comes the justification of hatred for Christians and the downplaying of Christianity’s contributions to society.

While these steps are nothing compared to the persecution of Christians in places such as the Middle East, China and a few countries in sub-Saharan Africa, they may portend increasing hostility in the future. Let us pray that hostility does not result in a repetition of last week’s events.

Why Gun Control Is Not the Solution

Finally, Obama’s call for more gun-control legislation should ring mute, seeing as the state of Oregon had passed such legislation shortly before the shooting.

“Local elected officials this year made universal background checks mandatory before the sale of any firearm in Oregon, one of 18 out of 50 states to do so,” Yahoo News reported on the day of the shooting. Laura Cutilletta, senior attorney at the California advocacy group Law Center to Prevent Gun Violence, called Oregon “above average” in terms of gun regulation.

Some states are more lax on gun registration, like Texas. A would-be shooting in Garland, a suburb of Dallas, Texas, resulted in the perpetrators being taken down by a police officer earlier this year. The only casualties were the shooters themselves. While Texas’s gun laws do not necessarily explain the difference in outcomes of these two shootings, Chicago’s tough gun laws seem unable to cut the city’s high rates of gun violence.

Rather than focusing on gun control, citizens should ask what motivates killers like Chris Harper-Mercer. As The Federalist’s Tom Nichols pointed out, this case may be only the latest in a long string of “lost boys,” trapped in adolescence, who lash out when they believe society has conspired against them. Only a focus on the responsibility, peace and hard-won achievement of true manhood can answer their adolescent frustrations.

A move toward manhood, work and family may prove more effective than any law. The Bible and the faith to which it gave birth once grounded our society in these values. Let’s defend that ancient book and the Christian faith rather than leaving them out of the story.