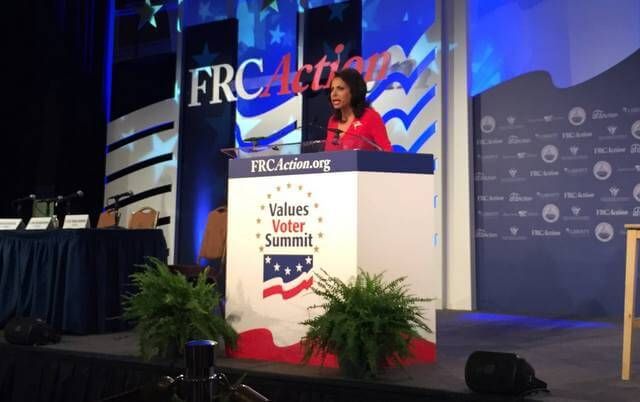 WASHINGTON – It is vital for American national security not to accept the huge influx of Syrian refugees because the Islamic State terrorist group (ISIS) has infiltrated them, according to Brigitte Gabriel, founder and president of ACT for America, the largest grassroots national security organization.

“We know ISIS infiltrated them, they were coming here under the disguise of refugees, but they are actually ISIS recruiters and ISIS sympathizers,” Gabriel told PJ Media in an interview at the Values Voter Summit on Saturday. She added that the refugees “are making up names — they can tell us anything, and there is nothing we can do to check it.”

The refugee crisis has become a huge issue following the viral photo of a drowned Syrian toddler, Aylan Kurdi. Members of the European Union have clashed on a plan to accept 120,000 refugees from the Middle East and Africa. Secretary of State John Kerry has announced that the United States will accept 85,000 refugees this year, up from the previous cap of 70,000, and an additional 100,000 next year.

Gabriel did not deny the charitable impulse of helping people in need. “We can still do humanitarian work, but we need to make sure we are protected first,” she declared.

No Way to Vet Refugees

In February, Michael Steinbach, assistant director of the FBI’s Counterterrorism Division, testified that the U.S. government has no way to vet the refugees pouring in from Middle Eastern countries. “We don’t have it under control,” Steinbach admitted.

“These people don’t have passports. We don’t even know if the name they give is their real name,” Gabriel explained. The refugees also are not just coming from embattled countries like Syria and Iraq, she argued. They also come from Tunisia, Libya, Eritrea, Djibouti and Afghanistan — migrants fleeing poor countries to go to rich countries.

Gabriel argued that the refugees must have a reason for going further west, as opposed to other countries in the Middle East. “These refugees can go to any country in the region, where they speak the Arabic language, where their children can assimilate and continue in their schooling with Arabic schools. Why are they coming to Europe?”

One reason, she alleged, is that “the word got out that if you want a freebie, this is the opportunity to come to Europe and live off the government.”

Perhaps more importantly, however, many Middle Eastern countries would turn the migrants away. “Saudi Arabia is a very wealthy country and a very big country — they have a lot of space,” Gabriel noted. She explained that Saudi Arabia, Dubai, the United Arab Emirates, Abu Dhabi and Kuwait are refusing to accept these refugees because “they are a national security threat.” When Arabic countries suspect terror activity from the refugees, why should we overlook it?

“If Saudi Arabia is refusing to accept them because they are a national security threat, why are we accepting them?” Gabriel asked. “Are we that dumb?” 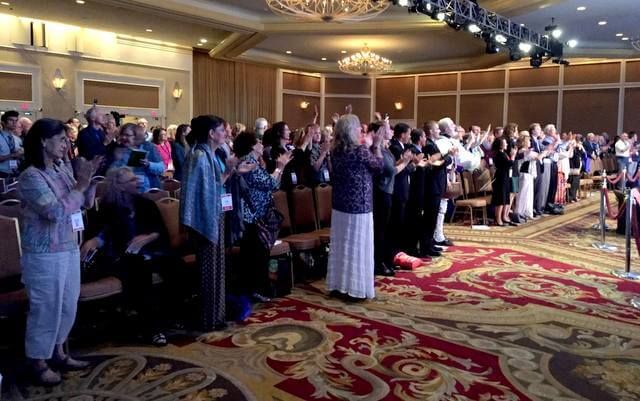 “I Have Lost My Country”

Gabriel, a Christian born and raised in Lebanon, explained that her history made her passionate about this issue. “I lost my country of birth to radical Islam — I do not want to lose my adopted country, America,” she declared.

“We had an open border policy — we welcomed everybody into our country because we wanted to share with them the westernization we had created in the heart of the Middle East,” she explained. Sadly, that westernization was not to endure.

Muslims started coming to Lebanon so their children could study at the country’s universities. They also stayed to work in their economy. “We built refugee camps for them in Lebanon, we took them in because we wanted to take care of them, but these people turned against us, and they destroyed our country,” Gabriel recalled, bitterly. She said the tipping point was when Muslims became the majority population.

“Lebanon went from being ‘the Eden of the Middle East’ to being the terrorist pit of the Middle East,” she declared. The country is run by a terrorist organization, and has no rule of law. Currently, there is not even a president in Lebanon, as none has been elected. “They are drowning in their own garbage, the government is falling apart.”

Gabriel pointed to other countries across the world facing turmoil from Middle East immigrants. “Europe is no longer Europe — Europe has become Eurabia,” she declared. The riots and car bombings in France, she noted, were not caused by Jewish migrants or Lebanese Christians, but Muslims. “They’re not youth riots — they’re Muslim riots.”

In Australia, too, she argued that Muslim immigrants are causing “mayhem.” “It’s not Vietnamese refugees who are creating it, it’s not Chinese refugees or Christian immigrants or Jewish immigrants — it’s only Muslims.”

The United States accepted Somali refugees in the 1990s, and they settled in Minneapolis-St. Paul and in Tennessee. “Have they assimilated?” Gabriel asked. “They gave us 42 jihadists, who are now fighting with the Al-Shabaab terrorist organization in the Middle East, and the first American suicide bomber who is an American Somali refugee.”

Gabriel argued that America has seen a preview of future struggles and needs to prepare for them. “We’d better wake up and smell the hummus coming from the Middle East.”

Where Do We Go From Here?

If Americans want to do something about this threat, Gabriel suggests they organize by visiting www.actforamerica.org. “ACT for America passed 42 bills in over 20 states in the last 5 years, all relating to national security,” she explained. The organization will train volunteers and help them start or join chapters in their area.

“We are working on bills to stop the influx of refugees from the Middle East, and we have refugee settlement working groups,” she explained. Activists can support legislation to make sure the FBI can vet refugees, or help settle the ones who have already checked out.

It is also important for Americans to understand their own history and the history of the Middle East, Gabriel argued. “ISIS is not a new invention. ISIS resurrected a caliphate which died less than 100 years ago,” she declared in her speech at the Values Voter Summit.

“September 11 is not just a random date. It is the day of the victory against Islam at the gates of Vienna in 1683,” Gabriel explained. When she asked the crowd how many of them knew that, almost no one raised their hands.

Gabriel also argued that it wasn’t the Nazis who invented the practice of marking Jews for special negative treatment with a yellow Star of David, but 9th century Muslims in Islamic Iraq.

She also corrected some misinformation about that much-maligned event, the Crusades. “The Crusades were launched because of mistreatment of Christians, and to retake Jerusalem, not to kill Muslims,” Gabriel declared.

“People think ‘oh these meanie terrible crusaders,’” she told PJ Media. But “the Crusades were launched 400 years after Islam began — a response to the fall of Jerusalem where Muslims were massacring Christians, forbidding them from ringing the church bells or from praying publicly.”

“Most people in the West do not know their own history. We are failing our students,” Gabriel lamented. In addition to organizing and opposing the reckless acceptance of thousands more refugees, Americans need to study the past and learn what happens when Muslims take over. There is no guarantee “it can’t happen here.”