What happened with Hurricane Patricia is a classic example of misinformation and false assumptions, all supported by supposedly credible scientific authorities.

A good illustration is revealed in Samantha Larson’s article, “How Hurricane Patricia Grew Into a Record-Breaking Storm,” published on the social activist Website, ATT:

While Hurricane Patricia may have been more influenced by El Niño than climate change, scientists fear that in the future the two phenomena could build on top of each other. Global warming means warmer sea surface temperatures, whether it’s an El Niño year or not.

As ocean temperatures continue to warm [sic] as a result of human-caused climate change, we expect hurricanes to intensify, and we expect to cross new thresholds. Hurricane Patricia and her unprecedented 200 mile-per-hour sustained winds, appears to be one of them now, unfortunately.

It is important to recall that Mann is the scientist who produced the now discredited “hockey stick” graph that literally rewrote history by claiming the Medieval Warm Period from 900 to 1300 AD did not occur. It was apparently done to support the false claim that temperatures are higher today than ever before. A revealing expose is laid out well in Mark Steyn’s new book A Disgrace To The Profession: The World’s Scientists – In Their Own Words – On Michael E Mann, His Hockey Stick And Their Damage To Science.

Regardless, note the use of the words, “may,” “could” and “appears to be” when Mann and Larson speak about fears for the future. They are clearly just speculating since no one knows the degree to which Patricia was influenced by El Nino or what the future trend of hurricanes will be. Climate activists do this all the time in an attempt to make a link between global warming, supposedly caused by carbon dioxide emissions from human activities, and tropical cyclones such as Patricia.

But it is unsubstantiated propaganda.

In 2012 the United Nations Intergovernmental Panel on Climate Change (IPCC) said that a relationship between global warming and wildfires, rainfall, storms, hurricanes, and other extreme weather events has not been demonstrated. In their latest assessment report (2013), IPCC scientists concluded that they had only “low confidence” that “damaging increases will occur in either drought or tropical cyclone activity” as a result of global warming.

The 2013 report of the Nongovernmental International Panel on Climate Change (NIPCC) concluded the same, asserting that “in no case has a convincing relationship been established between warming over the past 100 years and increases in any of these extreme events.”

In assessing Mann’s expectation that hurricanes will intensify, it is important to recognize that such forecasts were also made decades ago, but, as illustrated in Figure 1, it has not come about despite modest warming during this period. 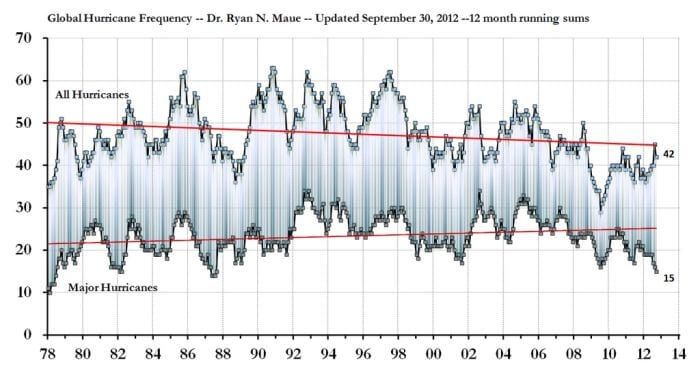 IPCC supporters respond that global warming will soon take off like a rocket, causing more, and more intense, tropical cyclones, dooming us all. But, again, we need to consider how IPCC forecasts have fared to date. The comparison between predictions and reality shown in Figure 2 does not inspire confidence. 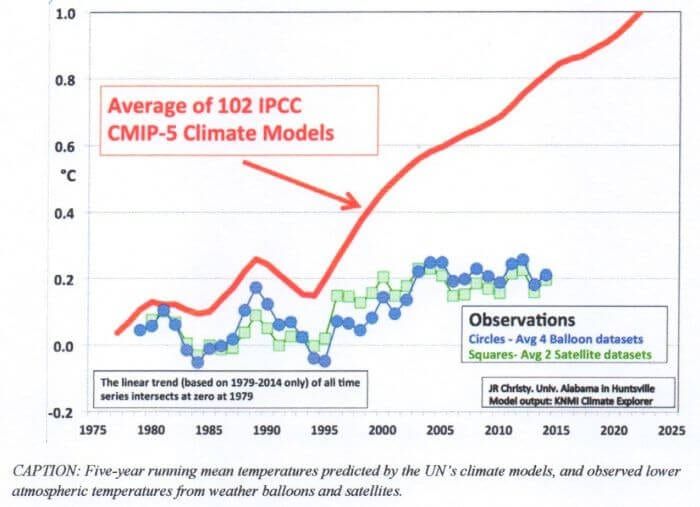 In fact, every prediction the IPCC has ever made has been wrong. After their first inept efforts in 1990, they stopped calling their work predictions and instead labeled them projections. Yet the public, fed by a gullible and activist press, still believes the IPCC makes legitimate predictions. They fail to realize that, if your predictions are wrong, then your science is wrong.

That hasn’t stopped the push from politicians who claim that the IPCC knows what it is doing. Two factors, President Obama’s drive to establish “action on climate change” as a major part of his presidential legacy, and the UN Climate Conference scheduled for Paris in December, are leading to an escalation of climate extremism to draw media attention. They now even present what are clearly natural events as if they are unnatural. It works because few people know what is natural.

Climate alarmists are focussed almost exclusively on generating exciting headlines that stick in people’s minds. Since scientific reality is always uncertain, and rarely reaches levels predicted by activists, they ignore science and disseminate fabricated “real facts” easy for politicians and a compliant press to use without thinking.

There are many examples, including Katrina, which was claimed to be a Category 5 but came ashore as a 3. The majority of the damage was due to flooding and most lives were lost due to drowning since an important dike was not improved because of interference by environmentalists. Hurricane Patricia is the most recent weather event to be the subject of political and media distortions. The level of threat was heightened to remarkable proportions.

How did they build the hyperbole and why was it so wrong?

Hurricanes begin as tropical depressions near the Equator. As wind speeds increase, they are renamed tropical storms and given a human name, in a bizarre form of anthropomorphism.

Wind speed is only known when the system passes directly over a surface station and there are virtually none over the oceans. As a result, wind speeds are measured by an aircraft flying through the storms at high altitude. The Washington Post reported, concerning Patricia:

And in this case the measurement has added weight because it is based on data collected from an aircraft, rather than mere satellite imagery. “We would like to acknowledge deeply the Air Force Hurricane Hunters for their observations establishing Patricia as a record-breaking hurricane. Clearly, without their data, we would never have known just how strong a tropical cyclone it was,” wrote National Hurricane Center forecaster Richard Pasch this morning.

What the Post didn’t report is that the few wind speed measures taken thousands of feet above the surface are used to predict surface winds using a computer model. The claims of Category 5 winds were clearly created to increase the hyperbole. The evidence that it was exaggerated is the rapidity with which the winds supposedly diminished after Patricia reached land. The New York Times reported,

“Less than an hour after Patricia made landfall as a Category 5 storm — the fiercest — the National Hurricane Center said it was barreling inland over southwestern Mexico with maximum sustained wind speeds of 160 m.p.h. But it quickly lost force, slowing to about 130 m.p.h. before 10 p.m. By Saturday morning it had been downgraded to a tropical storm.”

It is true that wind speeds decrease when a tropical cyclone passes over land because of friction and the removal of the warm water energy source. It is like cutting the fuel line to the car engine. But, in this case, the suddenness of the reduction was scientifically unreasonable and only occurred because they started with an artificially high starting speed as erroneously computed over the oceans.

The president of Mexico told his nation.

The first reports confirm that the damage has been less than that corresponding to a hurricane of this magnitude.

That was an understatement. The fact that Mexico’s death toll from Patricia stands at zero is not just because of efficient evacuation measures. It is also because the dangers of the storm were intentionally exaggerated.