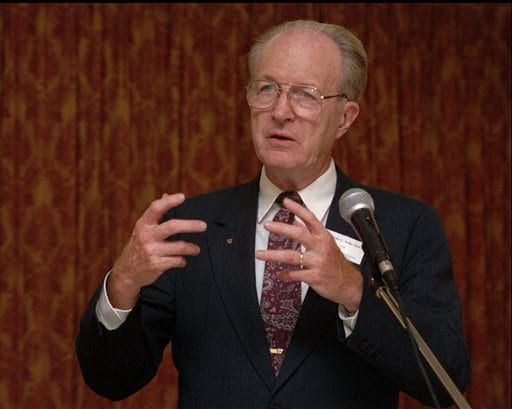 Enduring the Cincinnati Enquirer’s seemingly interminable attempts to round up new subscribers is among the more annoying trials Greater Cincinnatians must face. Their recruiters often appear in local grocery stores, desperate to almost give away three-month “trials.”

This once respectable full-throttle newspaper, which now looks as if it was cobbled together and produced at FedEx/Kinko’s on the fly overnight — and is actually produced 100 miles away in Columbus — is clearly hurting for readers. All the groveling in the world won’t gain my subscription as long as they publish disgraceful obituaries like the one which appeared last Saturday about national pro-life legend and Cincinnati resident John Willke, who died on February 20 at age 89. Other national establishment press outlets also participated in smearing Willke, but his local paper had a far higher duty to at least try to be fair — and failed.

Perhaps the best way to familiarize readers with Willke before illustrating how horrid the Enquirer’s obit was — as well as those found elsewhere — would be to excerpt the following paragraphs from the National Right to Life organization’s Monday tribute (bolds are mine throughout this column):

… In the early days of the right-to-life movement, Jack and Barbara Willke helped form the foundation of right-to-life educational efforts through the development of the “Willke slides” on fetal development and abortion, and their first book, “The Handbook on Abortion,” which sold an estimated 1.5 million copies. Both were considered must-haves for local activists.

“Every pro-lifer relied on the ‘Willke slides’ on fetal development that beautifully depicted the development of the unborn child as well as the brutal reality of abortion,” Tobias said.

The Willkes crisscrossed the nation for four decades speaking out on behalf of society’s most defenseless members. They inspired some of the earliest state and local right-to-life groups combatting abortion before the Supreme Court decisions in Roe v. Wade and Doe v. Bolton. The Willkes co-founded Right to Life of Greater Cincinnati in the early 1970s.

In September 1973, Dr. Willke joined the National Right to Life board of directors representing his home state of Ohio, and served continuously until his retirement in 2012. He served in a variety of capacities throughout the 1970s, including terms as vice-chairman of the board and vice president. He was elected president of National Right to Life (1980-1983 and 1984-1991), serving a total of ten years. During his tenure, he helped raised the profile of the organization through countless radio and television appearances, and trips across the country and around the world as an ambassador for the right-to-life movement.

… In addition to his work locally and nationally, Dr. Willke expanded right-to-life efforts with the formation of the International Right to Life Federation, which brought together pro-life organizations operating in countries around the world. He was president emeritus of the organization at the time of his death.

Incredibly, especially considering that Willke said nothing false or misleading at the time, Eaton spent five paragraphs dishonestly tarring him with Todd Akin’s 2012 U.S. Senate campaign blunder, and followed that exercise with a clumsy paragraph creating the impression that Willke and his wife Barbara, who died several years ago, were stubborn old coots who wouldn’t let go of the outlook which sunk Akin (numbered tags are mine):

Willke’s view on abortion didn’t come without criticism. Willke, who was a retired general physician [1], believed the stress of rape caused the female body to inhibit conception. [2] Former Missouri congressman Todd Akin also touted that idea, saying victims of “legitimate rape” rarely get pregnant. The 2012 comments caused a media sensation and national debate on the subject. [3]

Willke first put forward that theory over 30 years ago and in 1999 he said rape “can radically upset (a woman’s) possibility of ovulation, fertilization, implantation and even nurturing a pregnancy.” [2]

“I’m not saying she doesn’t get pregnant from assault rape,” Willke said. “She can and she does. It’s just very rare.”

David Grimes, an obstetrician and gynecologist in North Carolina who was a chief of the abortion surveillance branch at the Center for Disease Control, criticized Willke for this. [4]

“For Dr. Willke to say a woman can avoid getting pregnant by squeezing her Fallopian tubes is ridiculous,” he told The Enquirer in 2012. [5] “To suggest this doesn’t happen is cruel, cruel, cruel. Rape is an ugly and common occurrence.”

The Willkes maintained their viewpoints. [6] Their daughter Marie Meyers told The Enquirer in 2013 after Barbara died that the couple felt it was the right thing to do and believed they would be rewarded in heaven.

[1] — Willke was an obstetrician. National Right to Life says so, as does the New York Times, the Los Angeles Times and the Associated Press in their respective otherwise similarly tasteless obits. Wikipedia says that he “was an obstetrician in Cincinnati, Ohio, but ceased practicing medicine in 1988 in order to devote himself full-time to the anti-abortion movement.” In 1988, Willke was 63. Eaton’s claim that he was a “retired general physician” could conceivably be technically true, but it’s obviously misleading. The default assumption, given that others got it right, has to be that it’s deliberately so, to downplay upcoming Item [2] and to make Items [4] and [5] appear credible.

[2] (tagged twice) — Willke didn’t just “say” it in 1999. He fully documented his reasoning in an April column that year. Emilie Eaton and others obsessed with diminishing Willke should actually read it. Using a set of reasonable assumptions based on data available at the time, the doctor estimated that there were perhaps 450-740 potential instances per year of forcible rape-related pregnancy (as opposed to instances involving statutory rape) nationwide. He further expressed the following informed, expert opinion as an obstetrician as to why that number was probably lower:

To get and stay pregnant a woman’s body must produce a very sophisticated mix of hormones. Hormone production is controlled by a part of the brain that is easily influenced by emotions. There’s no greater emotional trauma that can be experienced by a woman than an assault rape. This can radically upset her possibility of ovulation, fertilization, implantation and even nurturing of a pregnancy. So what further percentage reduction in pregnancy will this cause? No one knows, but this factor certainly cuts this last figure by at least 50 percent and probably more. If we use the 50 percent figure, we have a final figure of 225 (or 370) women pregnant each year. These numbers closely match the 200 that have been documented in clinical studies.

The obit at the New York Times, in a rare bow to fairness, noted that Willke drew on a New England Journal of Medicine report which “suggested that rape victims typically experience a level of shock that prevents their bodies from functioning normally.” So the idea that being raped influences the odds of getting pregnant compared to consensual sex isn’t some crackpot idea John Willke concocted out of thin air.

Willke’s (and Akin’s) naysayers often absurdly assert that there are 32,000 “rape-related” pregnancies per year, over 100 times greater than Willke’s midpoint estimate. That number is based on a study which extrapolated a grand total of 34 cases of rape-related pregnancy over a three-year period out of a group of 4,008 to the general population of adult women 12-45 years of age. The researchers absurdly contended that “the national rape-related pregnancy rate is 5.0% per rape” (italics are mine). Readers comparing that figure to Willke’s careful calculations will see who’s really practicing pseudoscience. The correct number, if it could ever be determined, is far closer to Willke’s than it is to 32,000.

[3] — Akin’s comments didn’t spur a national debate. They spurred a national smear. Almost no one is any smarter on this subject as a result of the press’s coverage of Akin’s failed 2012 U.S. Senate campaign. More than a few people, though they feel really smart, are instead quite a bit dumber.

[4] — Eaton makes sure we know that Grimes in an ob-gyn. So we’re supposed to believe he’s smart about these things. As noted above, Eaton characterized Willke as a “general physician” to diminish his relative stature.

[5] — Contrary to what Grimes claims, Willke never stated or implied in any way, shape, or form that “a woman can avoid getting pregnant by squeezing her Fallopian tubes.” In fact, as seen above, he indicated the exact opposite, i.e., that the act of rape causes emotional trauma. While he did correctly observe that a woman’s Fallopian tubes can be “spastic” in a 2012 interview, he never stated or implied that such spasms can be willfully controlled.

[6] — To complete the smear, the first sentence of Eaton’s following paragraph, which presumptively refers to the previous five unless the reader is told otherwise, will cause many readers to believe that the “viewpoints” the Willkes “maintained” concerned forcible-rape pregnancies. It would have been so easy to write “the Willkes maintained their prolife viewpoints”  — or, if you must, “their anti-abortion viewpoints.” But Eaton, and the Enquirer, apparently had no interest in letting accurate writing get in the way of a “good” hit piece.

Though addressing the technical matters Eaton risibly raised is important, the overriding point is that she — and for that matter, the rest of the establishment press — had no business devoting any verbiage to this matter in the obituary of a man who arguably did more to save pre-born babies than any other prolife activist has before or since.

From a local perspective, that Eaton would even have thought to go there, let alone carry the idea into her piece, and that the Enquirer’s editors didn’t say, “Whoa, this is way out of line,” tells you everything you need to know about why I won’t subscribe to the paper even if they bring a copy to my door on a silver platter every day.

I’m not alone. In early 2006, the Enquirer had 201,000 daily subscribers. By late 2011, that number was down to 149,000. Now it’s 111,000. The Internet doesn’t even begin to explain that degree of decline. Being out of touch with your community and allowing outrageous bias to permeate every aspect of coverage, even your obituaries, does.