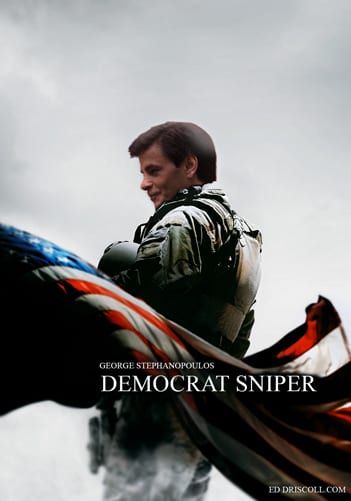 The 2016 presidential campaign is unofficially underway.

Those who oppose the very idea of a Republican ever again winning the White House are already in full battle mode. As was the case in the 2012 cycle, their strategy is to eliminate anyone the nation’s center-right base might actually like or learn to like before they even get out of the gate.

To be clear, I’m talking about the establishment press, not Democratic Party officials and officeholders. Most lefty pols are only too glad to pretend to be above it all as beat journalists, aided and abetted by RINO pundits who conveniently forget that the candidates they favored lost the last two times out, try to carry out their assigned dirty work for them.

Thus, we see attacks on newly reelected Wisconsin Governor Scott Walker for not having graduated from college. Well, neither did 10 other presidents, including Washington and Lincoln, and that cadre’s collective historical heft is undeniable.

They want America to believe that Louisiana Governor Bobby Jindal is unacceptable because he recognizes reality, namely that there are such things as “no-go zones” in Europe, and that certain enclaves in the U.S. could be heading in that direction. The press now feverishly insists that “no-go zones” are a myth. They are clearly working to permanently eliminate the term from news coverage and public discourse, even though New Republic reporter David Morrison, a 10-year Paris resident, cited their longtime existence earlier this month, and even though outlets like the New York Times, NBC News and Newsweek have referred to them in write-ups going back over a decade.

Jindal, a Rhodes Scholar who actually graduated from Oxford, unlike a certain former president, has also caught flak for mentioning God at, of all things, a religious forum, and for advocating that schools “teach our Judeo-Christian heritage.” Fun fact: While today’s public schools marginalize the role of Christianity in this nation’s founding and maturation, the truth is that until at least the late-1860s public schools themselves “were essentially Protestant schools, run by Protestant administrators and staffed by Protestant teachers,” while “many superintendents of state departments of education were, in fact, Protestant clergymen.”

Ted Cruz? Oh, he’s “utterly self-involved,” when the current occupant of 1600 Pennsylvania Avenue is that descriptor’s all-time champ. He’s too interested in “apocalyptic showdowns,” even though in the most recent such confrontation, it was then-Senate Majority Leader Harry Reid and President Barack Obama who decided to shut down the government. MSNBC’s unhinged Chris Matthews has called Cruz a “balloon head” and a “demagogue.”

Mike Huckabee? He’s a “mental midget” because he thinks pretend feminist Beyoncé should try to set a less raunchy example for her impressionable underage fans. He’d be “disastrous in a national campaign” because (gasp!) he, like the country, is socially conservative.

These media hits will only increase in frequency if sensible conservatives like John Bolton, Sarah Palin, Rick Perry or Michelle Bachmann, the irresponsibly “tarnished” but hardly conservative Chris Christie, or disappointments to conservatism like John Kasich and Lindsey Graham ever gain any kind of traction.

Meanwhile, the press heaps praise on Jeb Bush and, until he withdrew his name from consideration on Friday, stayed away from Mitt Romney. Bush and Romney are and hopefully were, respectively, the two potential candidates — besides Christie, who would have the same effect — whose presence on the November 2016 ballot would cause activist Republicans to beg off from volunteering at pre-election phone banks, and the GOP base as a whole to once again stay away from Election Day polling booths in droves.

They’re calling Florida Governor Jeb Bush a good guy because he “stakes out the middle ground,” has a “more moderate position on the issue” of illegal immigration, and “doesn’t want to bow to the right his party.” Jeb was undeniably a tremendous Sunshine State chief executive, but his positions on immigration, education and other matters of national importance are complete core-values betrayals. News that others in his family actually gave a heads-up about his exploratory committee announcement to the alleged “sex fiend island”-visiting husband of putative but weak Democratic front-runner Hilary Clinton should have surprised no one.

They largely ignored Mitt Romney. Why wouldn’t they? If Republicans were stupid enough to believe that the weakest GOP presidential candidate in modern U.S. history, who has done more to wreck conservatism than any other Republican alive, should be their standard-bearer in the first election with a woman likely ending up at the top of the other side’s ticket — well, as the old saying goes: “When your opponent is committing suicide, get out of the way.” Luckily, it appears we won’t have to find out.

The 2016 presidential election is all about the bases, and who gets theirs to the polls.

The left, hampered by eight years of economic and foreign-policy misery which is entirely on them, has to hope that its base, demoralized by eight years of historically awful economic misery inflicted by their darling first (allegedly, but not really) black president, somehow can get psyched up enough to elect either the first female president or some other ineffectual schlub, either of whom is virtually assured to inflict more of the same malaise upon them.

The base turnout advantage should be with the GOP nominee, but only if he or she doesn’t alienate them by running to be loved by the U.S. establishment press — a contest which no center-right candidate will ever win — and not of the United States of America.