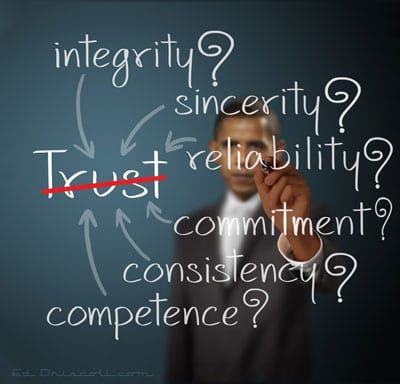 Republicans and conservatives frustrated with the GOP’s failure to nationalize this year’s midterm elections received a gift last week from, of all people, President Barack Obama. Going completely unappreciated is how his Department of Labor, particularly its Bureau of Labor Statistics, has from all appearances been conducting a de facto midterm election campaign with cooked unemployment figures for quite some time.

On October 2, Obama did the job elected Republican leaders up to that point had failed to do. Speaking at Northwestern University, he told his audience: “I am not on the ballot this fall. … But make no mistake: These policies (of my administration) are on the ballot — every single one of them.”

Now that Obama has laid down the gauntlet, we can all better focus on national issues like the economy, which, even as serious international troubles mushroom, remains firmly in first place in importance in voters’ minds.

It isn’t there because they think it’s in great shape, but Obama does. He told a Labor Day audience that “by almost every measure, the American economy and American workers are better off than when I took office.” On Friday, his wife Michelle, pressed into campaign duty because the list of Democratic politicians who want to be seen with her husband is almost as short as the number of World Series triumphs by baseball’s Chicago Cubs in the past 106 years, repeated that claim.

The list of “measures” which are worse than they were in January 2009 is exhaustive — and, to those negatively affected by what all too many pundits insist is to be the malaise-filled “new normal” from now on, exhausting. Obama’s claim is so laughably false that the establishment press’s supposedly vigilant but actually protective fact-checkers have mostly pretended not to have heard or seen it.

The highest-profile metric to which the president can point as representing a degree of economic progress is the official unemployment rate. It dropped to 5.9 percent in the BLS’s Friday report, its last such pre-midterm missive.

A confidential source who is in a position to know has told me that almost everyone tasked with gathering and submitting the raw data the bureau uses in preparing the Household Survey, the underlying report which forms the basis for BLS’s calculation of the unemployment rate, believes that it should be significantly higher.

That this consensus in the trenches appears to have recently grown should not be surprising.

In January 2013, after a nearly one-year delay, the Senate waved through Obama’s nomination of Erica Groshen to head BLS, succeeding a 34-year veteran who had been acting director during the previous 12 months.

Though there is no record of active Senate opposition to Groshen’s February 2012 nomination, it appears that her demonstrated “ties to a left-wing organization with communist roots and her radical views against small businesses” kept it in limbo. Team Obama appears not to have pushed hard for her confirmation until their guy was safely reelected.

Groshen’s minions have subtly changed the narrative which accompanies the bureau’s monthly employment situation report into one designed to minimize any potential damage a professionally balanced presentation of the facts might cause. To cite just one example, in June’s report, as temporary help agencies added 10,500 employees on a seasonally adjusted basis, BLS told us that “employment continued to trend up” in that industry. The continued explosive growth in the all-time record number of Americans working as temps — now within striking distance of 3 million — directly defies the administration’s “healthy economy” narrative. In September, as temp employment grew by almost 20,000, the bureau’s dispatch said nothing about their increased numbers.

Of all the key figures BLS presents, the unemployment rate is probably the one which can be most easily manipulated without leaving telltale tracks. The key lies in determining whether a person is considered to be looking for work.

Translating what my informant has told me into layman’s terms — while emphasizing that this person cannot specifically describe how the perceived rigging is occurring after surveyors electronically submit their data — it appears that taking what many people would see as an acceptable level of unsuccessful action to find work is no longer enough to place one into the ranks of the unemployed. The surveyed person apparently must have taken multiple specific steps during a given week to try to get a job. Surveyors believe that the bar to be considered actively looking for work has been artificially raised, and that many people who are somewhat diligently but not constantly seeking employment are not being classified as unemployed, and are therefore not even considered members of the civilian workforce.

From here, it seems that this manipulation could be perpetrated with relatively minor computer programming changes. The IT people involved in implementing these changes would likely not grasp their significance unless they happened to be very well versed in the bureau’s detailed survey compilation procedures and rules.

Even with minor changes, the unemployment rate can change significantly. If only two million of the record 92.6 million Americans classified as not in the labor force really should be considered workforce members and therefore unemployed under consistently applied rules, the official unemployment rate would be more than a full percentage point higher:

Based on history, a more gradual fall in the unemployment rate than the 1.3-point dip reported in the past 12 months makes sense. Job growth on a percentage basis was far more robust under Ronald Reagan than what we’ve seen during the past 4-1/2 years since recession- and policy-driven employment declines finally ended under Obama. Yet in March 1987, 4-1/2 years into the Reagan recovery and ultimately its “Seven Fat Years,” the unemployment rate was still a stubbornly high 6.6 percent, and had fallen by only 0.6 points in the previous 12 months.

There is some reason to believe that the alleged gamesmanship may go back more than two years — though to pull it off, I believe the administration would have had to go around BLS’s then-acting director. The sudden September 2012 unemployment rate drop from 8.1 percent to 7.8 percent was also highly suspect — and, coming just as early voting in that year’s presidential election began, quite convenient.

Back to the here and now: Does anyone really believe that a hardened leftist in the “if you like your plan, you can keep your plan” administration would be incapable of directing or perhaps perpetuating and enhancing such subterfuge?