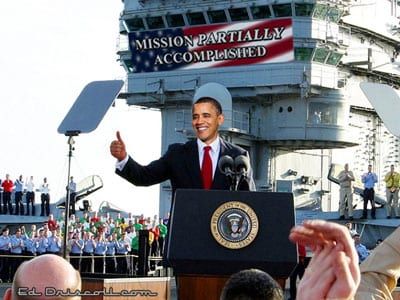 Those pursuing three authoritarian agenda items once considered unthinkable emanating from an administration which has become openly hostile to what once were our basic freedoms can already hang “Mission (Partially) Accomplished” banners on their walls.

First, there are the ongoing revelations about the government’s accumulation of digital mountains of personal information on citizens’ daily lives.

If there’s a positive result from this, it would be that many Americans have become a bit more careful about their data trail. But the good news ends there. Our emails, Facebook posts, text messages and other communications are subject to easy scrutiny by government minders and anyone else to whom those apparatchiks might feel like conveying information. The chilling effect on everyday speech, expression and interactions is a statist’s dream come true. Just wait until they integrate the Obamacare and Common Core data.

Places getting especially chilly include the human resource departments and HR consulting firms serving employers with between 50-100 “employees,” which includes “full-time equivalents” as defined by the Affordable Care Act. One of the more recent of the 27 mostly illegal or unconstitutional changes made by presidential or regulatory fiat to the Affordable Care directly affects them.

That change, which even the Associated Press briefly acknowledged was done for purely political reasons before eliminating that statement from subsequent revisions, exempts firms with 50-99 FTEs from the employer mandate — the requirement to offer health insurance coverage to all workers who average 30 or more hours per week or pay a $2,000 penalty for each, after an exemption for the first 30 — for yet another year.

But there’s a monumental catch. To squelch criticism of Obama’s alleged singular achievement, employers “will be forced to certify to the federal government — under penalty of perjury — that jobs they cut between now and 2016 are not due to Obamacare” to preserve that one-year reprieve. Thus, an administration hell-bent on keeping state-controlled health care in place, even if it completely wrecks what once was the greatest healthcare system in the world, has already succeeded in silencing key people in the trenches who might otherwise tell the nation what a disaster it has been and will continue to be.

The pervasive changes to the law Congress originally passed, as well as the new regime of coercion, signify that there really isn’t an “Affordable Care Act” anymore. There is only what must henceforth and for all time be called “Obamacare,” a mushy legal and regulatory maze which in many aspects barely resembles what Nancy Pelosi infamously said we could only read after passage before we could know what was in it. Unless someone has the legal standing, deep pockets, and exceptional bravery to successfully challenge them, healthcare law in America is whatever Barack Obama and Kathleen Sebelius say it is.

A recently revealed project at the Federal Communications Commission is by far the most brazen and disturbing of the three.

Under the thinnest imaginable pretense, allegedly the need to address the “problem” of sparse minority ownership of U.S. media outlets, the FCC wants “to send government contractors into the nation’s newsrooms to determine whether journalists are producing articles, television reports, Internet content, and commentary that meets the public’s ‘critical information needs.'” One dissenting commissioner summed up the clear danger: “The implicit message to the newsroom is they need to start covering these eight categories (of critical information needs) in a certain way or otherwise the FCC will go after them.” If the monitoring effort were to completely succeed, state and national news reports would consist of little more than word-for-word broadcasts of AP scripts and verbatim copies of AP content.

After howls of outrage at the obvious Orwellian impulse driving this supposedly “voluntary” effort, the FCC began to back down. On Tuesday, the commission said it “canceled” the study, but one FCC commissioner said it’s only “suspended.”

FCC Chairman Tom Wheeler is the same slippery guy whose response to a recent court ruling nuking its “net neutrality” rules was, according to Information Week, to work on “a new version” of the same thing. There’s no reason to trust his claim that the study has been canceled until a new regime is in place.

Meanwhile, newsrooms across America have been sent a message that they’d be better off sanitizing their content and keeping it in line with what Dear Leader would prefer to see, effective immediately. Don’t be surprised if Obamacare horror stories, of which there is no shortage, become rarely reported events.

Even if those pursuing the three measures just described never lift another finger, they’ll get a good deal of the fear-driven behavior change they wish to achieve, accompanied by side effects, including but certainly not limited to slower job growth, a continued lackluster economy, and civic malaise, about which they apparently care little.

The utter failure of a gun registration effort in Connecticut reveals that at least some hope exists for those who believe there might eventually be a way back from the accelerating despotic rush.

The Nutmeg State required that all so-called “assault weapons” be registered by December 31. Many freedom lovers who were distraught at seeing hundreds of gun owners waiting in line to comply at year-end have since been cheered by the knowledge that, in one of the bluest states in America, the vast majority of gun owners “flipped the bird at the government” by not registering anything.

This at least shows that there’s no shortage of passive resistance. We will likely soon learn that it’s not enough, but at least the well of courage isn’t, as some had feared, completely dry.