Don't Feed Us This Mitt Again 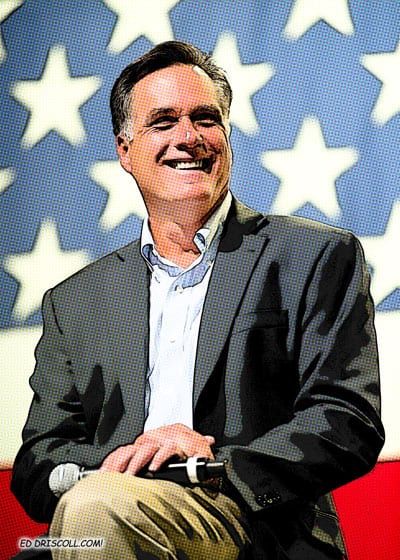 Word has it that establishment Republicans are nearly in panic.

They fear that their 2016 presidential fave, New Jersey Governor Chris Christie, has become so tarnished by Bridgegate that his viability may be vanishing.

What they see in Christie mystified me a year ago. It still does. At a time when the country remains in a fake “recovery” and the nation nears insolvency, the party of non-leftists — though even that’s not clear anymore – is poised to pave the way for the guy in charge of the state which is in the worst overall financial condition is in the nation. The Garden State’s economy, where the seasonally adjusted labor force has contracted by 108,000 in the past 11 reported months while Household Survey employment has fallen by over 18,000, is moving in reverse.

In any event, the GOP powers that be are so worried that a legitimate conservative might end up winning the party’s presidential nominiation that some reportedly want to bring back Mitt Romney for yet another try.

Yes, I know that Romney has said “we’re not doing that again,” and that his wife Ann “grabbed his head and gently shook it no” as he answered the interviewer’s question. But I also know that Richard Nixon, Bill Clinton, Barack Obama and scores of other politicians have made and broken “I won’t run” promises without suffering negative consequences.

Therefore, now is the time, once and for all, to set the historical record on Mitt Romney’s legal and political legacy straight, and to make the definitive case against his return.

Mitt Romney did more harm to conservatism and the constitution-based rule of law during his ten years in public life than any other individual in America who claims to be on our side – and he did it all despite never having held national office.

Romney’s betrayals as a governor and presidential candidate came in five poisonous flavors: healthcare; abortion; same-sex “marriage”; war on religion; and participation in, and encouragement of, authoritarian rule.

In Massachusetts, Commonwealth Care, aka RomneyCare, was the template for ObamaCare, up to and including the despised and patently unconstitutional (regardless of what John Roberts says) individual mandate. Yet Romney at one point in the 2012 campaign insisted that the individual mandate represents “the ultimate conservative plan.” There is no reasonable rebuttal to the contention of MIT economist Jonathan Gruber, “who advised the Romney and Obama administrations on their health insurance programs,” that Romney is ObamaCare’s “intellectual father.” Gruber is now considered one of Obamacare’s key architects.

RomneyCare formalized the “right” to the state-funded abortions; copays ranged from zero to $50. Two previous state court rulings in favor of this alleged “right” were never turned into law as required — until RomneyCare did it, effectively end-running the U.S. Supreme Court-upheld Hyde Amendment barring the use of federal funds for abortions. Now Obamacare and its regulations “require individuals who purchase certain health insurance plans to pay an additional (invisible $1) monthly surcharge for abortion coverage” to “compel and deceive millions of Americans into directly subsidizing abortions.” Barring reversal in the courts, this guts the Hyde Amendment nationwide.

The decision itself had and to this day still has no force of law under the separation of powers as prescribed in the Massachusett’s constitution. The court’s ruling, in telling the legislature that it had 180 days to “take such action as it may deem appropriate in light of this opinion,” admitted as much. The legislature did not pass any enabling legislation within that time frame. There was nothing wrong or illegal about this inaction, because “by the very terms of the order, the Massachusetts legislature had discretion to do nothing.”

Romney’s constitutional duty was also to do nothing unless presented with legislation, which he could have then vetoed, in all likelihood summarily closing the matter. Instead, and to his eternal shame, when the 180-day mark arrived, he forced the state’s town clerks to begin granting “marriage licenses” to same-sex couples. In doing so, he violated his sworn oath as governor to uphold the state’s constitution.

It’s hard to imagine, but it gets worse. In late 2007, an act of accidental journalism at the New York Times revealed that Romney reacted to Goodridge as he did because he had promised Log Cabin Republicans in 2002 that if elected governor he would, in the Old Gray Lady’s words, “obey the courts’ ultimate ruling and not champion a fight on either side of the issue.”

Mitt Romney’s same-sex “marriage” betrayal turned an illegitimate decision into a precedent, putting supporters of traditional marriage permanently on the defensive. Now their fight is beginning to look futile.

President Obama knew that his opportunistic switch to supporting same-sex “marriage” during the 2012 campaign would get no pushback from Romney without opening up the entire can of worms just described. Because of Romney’s response to Goodridge, same-sex “marriage” is on the verge of becoming the de facto law of the land despite well over 30 statewide electoral rejections by the governed. Now it has become a topic which is virtually off-limits to public discourse. The politically correct enforcers assume that anyone who is against same-sex marriage is “anti-gay.” If you have the “wrong” opinion and say it in the “wrong” place, your livelihood will be in jeopardy.

If you’re looking for a proactive “war on religion,” Mitt Romney has been there and done that too, as we’ll flash back to on the next page.

In 2005, the governor’s legal team concluded that a recently passed statute required “Catholic hospitals in Massachusetts to dispense Plan B – an ‘emergency contraceptive’ that studies and the (birth control) pill’s manufacturer have suggested can cause early abortions,” violating religious conscience protections. That conclusion stood, even though “most Massachusetts politicians agreed,” even including former Massachusetts Governor and 1988 Democratic presidential candidate Michael Dukakis, that a 1975 religious exemption should still have applied.

A similar scenario ensued with adoption services which refused to place children with same-sex couples:

(Romney) cited a state regulation that compelled Catholic agencies to comply with the law, contrary to their beliefs. At the time, Michael Dukakis … said, “If it’s a regulation, governors can change regulations if they want to. That’s up to him.”

Enforcing that rule ended 100 years of adoption services by Catholic Charities in Boston.

In these matters, Romney at best took the path of least resistance. At worst, his gubernatorial administration exhibited thinly veiled hostility towards long-respected, natural law-driven beliefs.

Romney’s offenses against the constitution-based rule of law already noted are important on two levels.

The first is that his actions in Massachusetts, and the lack of negative consequences attaching to those actions, have served to encourage the Obama administration’s serial willingness to flout the U.S. Constitution and its separation of powers.

The second relates to how we would expect a President Romney to react to serious and confrontational situations. Would he follow the law and the Consitution, or give in to authoritarian impulses? One clue indicating that the answer would all too often be the latter was his response to Obama’s boardroom coup at General Motors in early 2009 which set the stage for Uncle Sam’s takeover of the company. Instead of expressing outrage, Romney complimented the president for “expressing some backbone.”

So there it is: statist health care; neutering the Hyde Amendment; personally assisting and enabling the litigation-inspired imposition of same-sex “marriage”; a then-unprecedented assault on religion; and a pervasive undermining of and failure to defend the rule of law.

(Artwork based on a photo by Christopher Halloran, Shutterstock.com.)