Obamacare and That Q-Easy Feeling 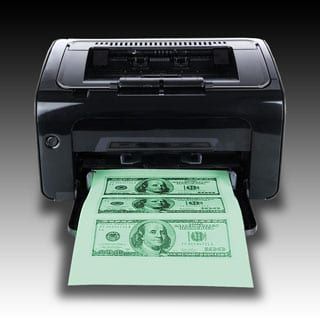 On Thursday, the Federal Reserve made a mockery of President Obama’s recent campaign to convince the American people of “how far we’ve come from where we were five years ago.”

In “unexpectedly” announcing that it would continue propping up the economy with $85 billion of monthly “quantitative easing,”  i.e., electronically “printing” money out of thin air to buy Treasury and mortgage-backed securities, Fed Chairman Ben Bernanke essentially said, “This economy still stinks.”

The mystery is why the Fed’s decision to leave “QE” where it is was at all unexpected, for a number of obvious reasons, plus another which should be.

In July, in a rare moment of unfettered candor deliberately ignored by all but a very few in the establishment press, when asked at his congressional testimony what would happen if the Fed tightened its monetary policy — which in the current context really means, “What would happen if you reduced QE by as little as $10 billion per month?” — Bernanke responded bluntly: “The economy would tank.”

Nothing we’ve seen in the past two months would lead any reasonable observer to believe that the economy is meaningfully improving, or that it wouldn’t slip into another recession without its full monthly shot of monetary crack cocaine.

Employment growth this year has been and continues to be dominated by part-timers and temps. Labor force participation is at a 35-year low. In June, wildly disproportionate food stamp enrollment was over 47 million for the eleventh month in a row, seemingly and intractably stuck at a level 36 percent above where it was at the recession’s official end in June 2009.

Seasonally adjusted new home sales in July were over 20 percent below the figure originally reported in June, which itself was revised down by 8 percent. This is the sector whose alleged strong but in reality barely existing turnaround was going to bring back the economy. Despite all the hype, the fact remains that the seasonally adjusted number of single-family homes under construction in August was barely higher than it was at the recession’s end.

Beyond that, 2012 Census Bureau data released on September 17 revealed that real median household income fell for the fifth straight year to a mind-boggling 8.3 percent below where it was in 2007. African-Americans (down 11.3 percent since 2007) and Hispanics (down 8.9 percent) have taken even harder hits. The overall poverty rate, as imperfect a measurement as it is, remained at 15.0 percent, up 2-1/2 points, or 20 percent, from 2007.

Barack Obama, allegedly a fan of redistributing wealth from the rich to the poor and a champion of the middle class, has presided over an economy where during the past two years only the top 5 percent of households have seen median income gains.

In a huge irony, given Obama’s alleged “progressive” nature, stock market investors are about the only ones who are pleased with Bernanke’s move. Interest rates will remain artificially low for a while, but I wouldn’t get too comfortable. One astute contrarian claimed on Wednesday that “the Feds have already lost control of the bond market,” and in essence that it’s only a matter of time before “it lose(s) control of the stock market.”

For now, stocks remain one of the few places an investor can go, outside of volatile commodities, in pursuit of returns greater than inflation. Apparently, the market’s major players all seem to believe that they’ll know when to get out before calamity strikes. Logic dictates that all of them can’t be right.

This government-induced economic tragedy and its reverse Robin Hood nature is beginning to wear on the can-do American psyche. Amazingly, 8.4% of Americans now describe themselves as “lower class,” which is “more than at any other time in the four decades that the question has been asked.”

Now here comes Obamacare. If it isn’t stopped, we many never see the end of the Fed’s QE. That’s because, when it comes to demoralizing the population, to quote an old Bachman-Turner Overdrive song, “you ain’t seen nothin’ yet.”

Beyond the confusion, the cost increases, the layoffs, the lower quality of care, and the deliberately skewed part-time workforce it will create, Obamacare will, as I noted in March 2010, virtually destroy almost all motivation for financial self-improvement while deeply discouraging marriage.

A table I used 3-1/2 years ago, based on information originally prepared by Robert Rector at the Heritage Foundation in January of that year, drives home this point. It shows how Obamacare’s exchange subsidies change at different income levels. The table remains essentially correct except for relatively small changes due to inflation and revised poverty lines. 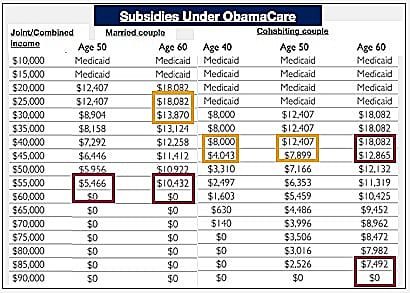 My original explanation (bolds are mine):

The orange boxes represent examples where the subsidy decrease amounts to almost 80% or more than 80% of a couple’s $5,000 increase in combined or joint income. After adding another 7.65% for Social Security and Medicare taxes on top of the typical 15% (or higher) marginal federal income tax rate, the extra $5,000 earned will cost the couple more than $5,000 — even before considering state and local income taxes.

Then there are the purple boxes, where subsidy loss alone amounts to more than $5,000, including one case where it’s more than double that, before considering any other taxes.

Even the supposedly “not so bad” incremental changes not boxed in above, which show roughly $500-$1,000 subsidy reductions for each additional $5,000 in income, are hugely discouraging. As I wrote 3-1/2 years ago:

.. many and probably most lower- and middle-income Americans will conclude that there’s no point in accepting promotions, working overtime, getting a second job, or attempting any other form of financial self-improvement (except perhaps under the table). They will thus end up stuck where they are.

As to the incentive to get or stay married, to cite just one example in the table: A married couple where both spouses are 60 years old and each earns $30,000 per year ($60,000 combined) would move from receiving no subsidy if they stay married to $10,425 in annual subsidies if they choose to cohabit.

There’s a word for when the government, as shown above, takes all of the fruits of your incremental labor and in certain instances even more than that. It’s not socialism. It’s far more than that. Financially at the margins involved, it’s de facto slavery, in that the fruits of all of one’s work are taken by the master, in this case the government, in return for nothing.

Republicans appear to have acquired a bit of a spine Wednesday, as the John Boehner-led House of Representatives passed a continuing resolution which does not fund Obamacare.

If the real-world impacts seen in the above table aren’t enough to stiffen Republicans’ and conservatives’ resolve to stay their current course, what will be?

(Artwork atop post based on a modified Shutterstock.com image.)