Obama: Our Out-of-Control Debt Is 'Sustainable' for the Next Decade 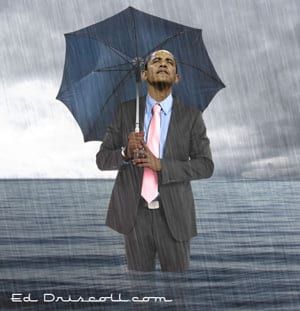 The takeaway quotes from that sit-down concern Obama’s unserious take on the size and grave nature of the federal government’s annual deficits, which have exceeded $1 trillion during each of the past four fiscal years, and the national debt, which, at $16.71 trillion as of Tuesday, has increased by over $6 trillion since he took office less than 50 months ago:

And, y– you know– I think what’s important to recognize is that– we’ve already cut– $2.5– $2.7 trillion out of the deficit. If the sequester stays in, you’ve got over $3.5 trillion of deficit reduction already.

And, so, we don’t have an immediate crisis in terms of debt.

Even if the first paragraph made sense, which it doesn’t, the second paragraph doesn’t follow logically.

The $2.5 trillion to $3.5 trillion in “cuts” to which Obama referred are really reductions in projected spending growth spread out over the next ten years. Very little of these reductions will take place in the current fiscal year, and the vast majority of them have obviously not happened “already.” Any claims relating to reductions in future years are speculative at best, because they can either be undone by future congresses with the help of Obama himself or a future president, or undermined by slow economic growth.

In early February, the Congressional Budget Office, using fairly aggressive growth assumptions, projected that the government will run cumulative deficits during the next ten fiscals years through 2023 amounting to $7 trillion, and that the “debt held by the public” (i.e., what Uncle Sam owes its bondholders and creditors) will grow by $7.7 trillion. The fact that future annual deficits might not be quite as absurdly high as what we’ve seen during the past four intolerable years would only lead one to conclude that there’s “no immediate crisis” if the national debt were currently small. Unfortunately, it’s not.

If you didn’t know any better, you would think that Barack Obama doesn’t understand the difference between the deficit, the amount by which government outlays exceed government receipts, and the national debt, which is how much the nation owes to its creditors. Though it’s tempting to believe otherwise, of course Obama knows the difference. What he is really hoping is that the average American, or at least the average low-information voter, doesn’t, and that his “clever” phrasing will cause many to believe that both our deficits and national debt are coming down. In other words, he’s betting against the intelligence of a large percentage of the American people, while also calculating, probably correctly, that his lapdogs in the establishment press won’t call him out for doing so, and will in fact support his misdirection. In other words, he’s not governing in any real sense; he has instead embarked on a 20-month campaign to win a Democratic majority in the House in the 2014 elections.

Obama’s statement denying “an immediate (debt) crisis” is consistent with what he was willing to reveal during the 2012 presidential campaign. In October of last year, while unable to identify its amount, he told David Letterman that “we don’t have to worry about it short term.” He also said that “it is a problem long term and even medium term.”

That’s not what Obama told Stephanopoulos in his Wednesday interview. In his very next sentence following the excerpt above, the president did a complete about-face:

In fact, for the next ten years, it’s gonna be in a sustainable place.

Gosh, I had no idea that the nation’s financial situation has improved so much in the past five months. Of course, it hasn’t.

Even given his pathetic opponent, Obama’s ridiculous assertion might have buried him electorally if he had uttered it during the presidential campaign. Assuming he really believes it, he should have. Instead, as has so often been the case, he chose to mislead the American people. “Progressives” have known for decades that they can’t win elections if they tell us what they really believe.

The CBO’s projection leaves 2023 “debt held by the public” at 77 percent of the nation’s annual economic output, or gross domestic product, up from about 41 percent at the end of fiscal 2008. That’s not all that far from the 90 percent of GDP threshold at which many economists consider a nation to be “maxed out,” i.e., the point at which lenders will likely “either decide to stop lending or raise their interest rates.”

There are plenty of reasons to believe that we’ll hit that 90 percent limit well ahead of 2023. The most important is lackluster employment growth — and yes, it’s still lackluster despite last week’s news that the economy added 236,000 seasonally adjusted jobs in February and that the unemployment rate dropped to a still completely unacceptable 7.7 percent.

Job growth is not “accelerating,” the term used after the report’s issuance by the Associated Press, aka the Administration’s Press. The raw numbers before seasonal adjustment show that the economy lost more net jobs during the past four months than it did during the same four months a year earlier.

To the extent job growth is occurring, it’s largely part-time and temporary in nature. After seasonal adjustment, the government’s monthly Household Survey, which is the basis for the reported unemployment rate, tells us that there were 77,000 fewer full-timers in February than in January, but 102,000 more part-timers. The Establishment Survey, the basis for reported job growth, tells us that temporary help services, a sector which contains about two percent of all employment, have added a seasonally adjusted 109,000 jobs in the past 12 months. That’s over 5.5 percent of all private-sector job growth during that time.

We haven’t seen anything yet. Just wait until employers fully grasp ObamaCare’s impact on their operations. The bias towards hiring part-time workers is what will “accelerate.” Part-time workers pay less in federal income and employment taxes. This will lead to significantly lower federal tax collections, higher deficits than CBO expects, and faster growth in the national debt.

It’s still not inconceivable that we will become “maxed out” by the end of Obama’s second term — especially because the president insists, as he told John Boehner during “fiscal cliff” discussions, that “we don’t have a spending problem.” Oh yes we do — and if we don’t fix it, an abyss which no amount of punitive taxation will prevent awaits.

(Illustration above based on a modified Shutterstock.com image.)