From 'Scandal-Free' to Near Scandal Fatigue in Three Weeks

On August 30, concerning President Barack Obama’s reelection prospects, Allan Lichtman, an American University history professor and author of The Keys to the White House: A Surefire Guide to Predicting the Next President, told US News: “I don’t see how Obama can lose.”

Lichtman’s presidential election success formula, which has correctly predicted the winner of the popular vote in every contest since 1984, requires that the party currently holding the White House prevail on eight of thirteen “keys.” Lichtman contended that Obama was winning nine of them, with a tenth, whether the economy is in recession during the campaign, pegged as “undecided.”

What a difference three weeks makes.

Lichtman’s undecided key was questionable from the get-go. Even if the economy isn’t in recession as normally defined next year, almost everyone agrees that it will feel like one. The White House’s “alternative economic forecast” predicts that the unemployment rate will be at or above 9% throughout next year. The Congressional Budget Office hedges just a little, projecting “close to 9 percent through the end of 2012.” Both may be overly optimistic. Another month or two of job reports showing zero job gains or even job losses will almost certainly push the unemployment rate higher; if they don’t, it will only mean that “going Galt” has become more widespread. No incumbent president since World War II has won reelection with a jobless reading above 7.2%.

Lichtman believed, and probably still does, that Obama has met the first of his two “foreign/military” keys requiring “a major success in foreign or military affairs” because of Osama bin Laden’s assassination. While very important, whether it’s electorally “major” is debatable, especially considering the event’s subsequent mishandling. Even conceding bin Laden, an Islamist-dominated Libya or Egypt, each of which is quite possible by next fall, could ruin Lichtman’s other “foreign/military” key requiring no significant failures.

He also felt that Obama was winning the “scandal” key, which requires that “[t]he incumbent administration is untainted by major scandal.” He then revealed that he’s not a close follower of the news beyond the Associated Press, the New York Times, and the ABC-CBS-NBC axis when he said: “This administration has been squeaky clean.”

Before readers double over in spasms of laughter, note that the presence or absence of “taint” is in the eyes of voters and depends heavily on whether scandals, to the extent they exist, have penetrated public perception. One dictionary definition of “scandal” calls it “a disgraceful or discreditable action, circumstance, etc.,” but another requires “damage to reputation; public disgrace.”

Concerning the latter definition, Lichtman’s own ignorance demonstrated that he was probably right about his scandal key at the end of August, despite at least the following unreported or underreported items listed here which have arguably met the former.

Then came Solyndra, LightSquared, and Gunwalker.

Solyndra’s collapse contains so many disgraceful elements that the press can’t get away with totally ignoring it (though, as seen here and here, they’re still trying mightily, and distorting things whenever they can). The amount of taxpayer loss involved, at over $500 million for just one deal, is huge. The quid pro quo of campaign contributions and the lobbying for favorable treatment could hardly be more obvious. Reelection-related considerations clearly intruded to override dire warnings that the company couldn’t possibly succeed. Finally, as Andy McCarthy noted at National Review on September 17, the Department of Energy’s agreement to allow private investors repayment priority ahead of the government clearly broke the law.

The Solyndra debacle is not just Obama-style crony socialism as usual. It is a criminal fraud.

… Solyndra … was using its government loans as a springboard to go public. When the sale of securities is involved, federal law criminalizes fraudulent schemes, false statements of material fact, and statements that omit any “material fact necessary in order to make the statements made … not misleading.”

… That’s exactly what President Obama did on May 26, 2010, with his Solyndra friends about to launch their initial public offering of stock.

As president, Obama had a fiduciary responsibility to be forthright about Solyndra’s grim prospects — in speaking to the American taxpayers whose money he had redistributed, and to the American investors who were about to be solicited for even more funding.

… The president looked us in the eye and averred that, when it came to channeling public funds into private hands, “We can see the positive impacts right here at Solyndra.”

… The word for such schemes is fraud.

The LightSquared mess, in addition to having many of the element of Solyndra, adds a national security-endangering angle, as described by Richard Pollock, to predictable cronyism: 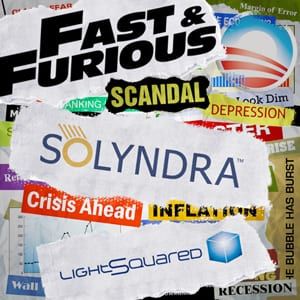 Speaking of security and defense, the Gunwalker scandal’s body count continues to grow, and its scope has spread to include Gangwalker in the Midwest, Operation Castaway out of Tampa, and incidents traced to Texas. Bob Owens has shown that the multiple enterprises almost have to involve coordination from the highest levels of government, with possible motivations ranging from creating a pretext for circumventing the Second Amendment to causing illegal immigrants fleeing destabilized Central American nations to flood into the U.S.

No wonder the administration and its backers have become desperate to discredit Congressman Darrell Issa and his Gunwalker investigation — so desperate that a leftist front group has filed an ethics complaint against him based on a New York Times Issa hit piece which has been corrected three times and contains ten other alleged factual errors.

Any one of these three scandals would probably have brought down or at least seriously crippled a Republican or conservative administration by now.

Thus, we have gone from Allan Lichtman’s scandal-free, “squeaky clean” fantasy to virtual scandal fatigue in three weeks, and from “I don’t see how he can lose” to worries about Obama’s eroding base and even a call for him to withdraw.

By now, it should be clear that objectively written history will not be kind to those who were seduced by “hope and change.” In November 2012, voters must permanently reject all who are linked to it.

(Thumbnail and above illustration based on images from Shutterstock.com)