Should Grandma Get Divorced? ObamaCare Says So

It’s interesting, isn’t it, how the truth is coming out about ObamaCare now that the House has passed it and the president has signed it?

On Tuesday, Michigan Congressman John Dingell told WJR’s Paul W. Smith, in response to a question about why much of the legislation doesn’t kick in until 2014, that:

… when you’re going to pass legislation that will cover 300 [million] American people in different ways it takes a long time to do the necessary administrative steps that have to be taken to put the legislation together to control the people.

Many of us already knew that this has been the agenda all along; but now it’s out there, and they can’t take it back.

David Leonhardt, the propagandist who pretends to be a business reporter for the New York Times, let the redistributionist cat out of the bag in Wednesday ‘s paper in a piece entitled “In Health Bill, Obama Attacks Wealth Inequality.” Note: not merely “income” inequality, but “wealth” inequality. More on that in a bit.

Then on Thursday morning, as the Democrat-controlled Senate wrestled with Republican members over stripping certain language from the bill, the Associated Press’s Alan Fram confirmed the wire service’s status as the official propaganda arm of the Democratic Party when he sobbed that these maneuvers might prolong “what has been a politically painful ordeal for the party.” Zheesh.

Much has been written about the legislation’s onerous taxes, including items large and small. One of the biggies is a new 3.8% hit on capital gains, dividends, investment income, and rental income. One relatively small but especially annoying item that betrays the control-freak nature of the bill alongside Congress’s breathtaking economic ignorance is its 10% excise tax on indoor tanning services. One tanning salon owner predicts that 1,000 salons will close within 12 months after the tax goes into effect on July 1. Didn’t somebody say in his January State of the Union address that “jobs must be our number-one focus in 2010”?

Beyond the paramount moral issues relating to the quality and availability of medical care, anyone who believes that ObamaCare will only affect high-income earners and a few isolated industries is in for a rude shock if the legislation is not successfully repealed in time. How rude? ObamaCare’s worst financial provisions have nothing to do with taxes, but instead relate to its subsidies. When they take full effect, their impact will dramatically advance each of three goals described above: income and wealth redistribution, control, and the long-term political power of the far left.

The estimable Robert Rector at the Heritage Foundation laid out the numbers on January 20. While Rector’s laudable primary goal was to demonstrate the destructive effect of the subsidy structure on couples’ willingness to get or stay married (which will become apparent without further comment), he also devastatingly detailed what happens to people — married or unmarried — if they simply try to financially advance themselves.

The following information from Tables 2 and 3 of Rector’s post, with boxes added by me, illustrates the overwhelming disincentives of ObamaCare’s subsidy structure. Per Rector, “The subsidies include Medicaid eligibility, insurance premium credits, and out-of-pocket health care expense credits as applicable.” The examples presented involve couples earning equal incomes who have no children. Brace yourself: 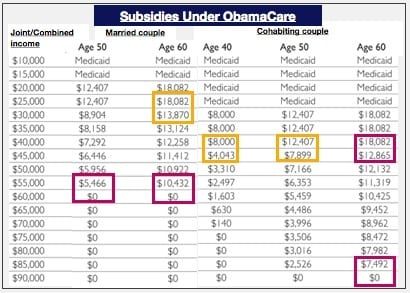 The orange boxes represent examples where the subsidy decrease amounts to almost 80% or more than 80% of a couple’s $5,000 increase in combined or joint income. After adding another 7.65% for Social Security and Medicare taxes on top of the typical 15% (or higher) marginal federal income tax rate, the extra $5,000 earned will cost the couple more than $5,000 — even before considering state and local income taxes.

Then there are the purple boxes, where subsidy loss alone amounts to more than $5,000, including one case where it’s more than double that, before considering any other taxes.

The New York Times’s use of “wealth” in its headline for Leonhardt’s story was perhaps accidental, but in reality painfully accurate. People who advance themselves will not only in most cases be left with little or nothing additional to show for their efforts, they will in many situations have to pay for the privilege out of their own “wealth” — or if they don’t have any “wealth” laying around, by borrowing.

There’s a term for a state that penalizes additional earnings on a dollar-for-dollar basis, and it surely isn’t “representative democracy.” I don’t think anyone has yet coined a word describing a political philosophy that is okay with taking more than that. Perhaps it should be “Obamism.” Note that this is far more extreme than virtually anything Europe’s most brazen socialists have attempted since World War II.

Given the disincentives, many and probably most lower- and middle-income Americans will conclude that there’s no point in accepting promotions, working overtime, getting a second job, or attempting any other form of financial self-improvement (except perhaps under the table). They will thus end up stuck where they are. The remarkable income mobility which is so critical to long-term economic growth and prosperity and which has marked this great nation as so unique for centuries will become a distant memory.

Not coincidentally, the “haves” will remain the haves, which takes us back to Congressman Dingell’s statement about “control(ling) the population” and to the far left’s lust for a permanent perch in power without having to endure the “ordeal” of dissent. If ObamaCare is successfully installed, a demotivated population so dependent on government largesse for its very health and its mediocre but low-risk economic well-being will fiercely resist any attempt by those who love freedom and liberty to upset things in any way.

What Congress and Obama have imposed must be utterly repudiated and totally repealed. An America whose population still believes in the values of its Founders would remove from office anyone who voted for this tyrannical monstrosity — if not in November’s elections, shortly thereafter through impeachment. The question is: are we still that country?