In it, I had the unmitigated gall to note that the federal government has collected far less in tax receipts during this fiscal year compared to last year than an economic contraction of less than 1.75% would seem to predict (not annualized, the economy contracted 0.125% in the third quarter of 2008 and 1.61% in the fourth).

I also “sinned” further by suggesting that the “going Galt” phenomenon has contributed to the shortfall.

That suggestion has plenty of support beyond “mere” anecdotes cited by ABC and those recited by several Pajamas Media commenters during the past few months.

April 2008 saw an all-time record for federal tax collections of over $400 billion, largely buoyed by final 2007 tax payments and first-quarter 2008 estimated tax remittances from business owners, investors, and entrepreneurs who pay taxes as individuals. It was a performance I characterized at the time as a “supply-side stunner,” because it showed, five years on, that George Bush’s investment-related tax cuts of 2003 still had growth-generating legs.

The collections record occurred as the economy was in the midst of recovery after a difficult fourth quarter of 2007. First-quarter growth was a tepid 0.9%, but the second quarter’s 2.8% was just short of the 1958-2007 median of 3.1%. The real (i.e., not seasonally adjusted) economy added jobs, though not as many as in previous years, from February through June.

Thus, we were not in a recession as normal people define it — not numerically and not mentally. As I wrote at the time of the high producers who were generating so much cash for Uncle Sam: “many … are thinking, in the face of relentless media harping to the contrary, that 2008 will be at least as profitable [as 2007].”

But a short time later, receipts began tailing off and went comparatively negative: 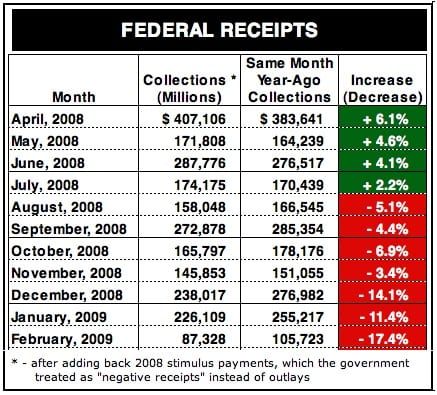 What triggered the sudden shift? It was the beginning of the POR (Pelosi-Obama-Reid) economy in mid to late June.

Starting in June and all the way through to Election Day, Nancy Pelosi, Barack Obama, and Harry Reid repeatedly told the country that they were ready, willing, and would soon be able to starve the country of the conventional sources of energy it needs to keep its economic engines running, regardless of the consequences, bowing before what may be the greatest hoax in human history. Enough high producers to make a difference believed them and abandoned their previous guarded optimism.

Starting in June and all the way through to Election Day, Pelosi, Obama, and Reid — but especially presidential nominee Obama — told the country that they were ready, willing, and would soon be able to punitively tax the 5% of the nation’s most productive so they could redistribute money to everyone else. Enough high producers to make a difference believed them and abandoned their previous guarded optimism.

In September, the decades-in-the-making, Democratic Party-driven housing and mortgage lending mess came to a head at Fannie Mae and Freddie Mac. Washington then allowed itself to be blackmailed into a series of financial sector and other bailouts that appeared to be, and have turned out to be, seemingly endless. Enough high producers to make a difference headed for the lifeboats and abandoned what little optimism remained.

Enough high producers to make a difference abandoned their spring optimism, not because of then-current economic conditions, which were at worst mediocre. They did so because of their assessments of what economic conditions would be in the not-too-distant future, based on the perilous pronouncements of Pelosi, Obama, and Reid. Many of those who didn’t catch on during the summer did so after observing the reckless September-October actions of the Washington establishment.

As a result, they took steps that businesspeople, entrepreneurs, and investors ordinarily take when a serious recession takes hold — not hiring, not expanding, letting people go and not replacing them, making worn-out equipment last longer instead of buying new, and others — before the serious recession took hold. They deliberately downsized in response to stated promises by powerful government officials Pelosi, Obama, and Reid to penalize and punish them and the economy as a whole, if and when they gained power.

In other words, enough high producers to make a difference preemptively “went Galt.”

Their perfectly logical and understandable reactions have caused the recession to be much deeper than it could or should have been. The “going Galt” phenomenon and the recession itself have also sent federal receipts into a frightening free fall. The following graphic includes March’s actual receipts and my estimated results for April (detailed here): 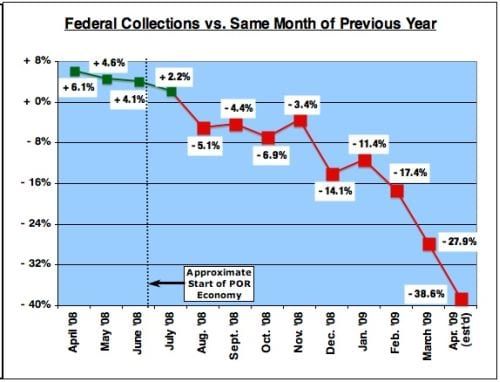 I estimate that April 2009’s receipts will be about $250 billion instead of last year’s $407 billion. A final result as low as $220 billion would not surprise me a bit.

This collections slowdown is far worse than anything seen in 2001 or 2002. If it continues, in combination with a current Washington spending spree that may be unrivaled in human history, the federal government’s fiscal 2009 deficit could top $2 trillion — far worse than the Congressional Budget Office’s current estimate of “only” $1.845 trillion.

Maybe, just maybe, if this administration and Congress would decide that economic growth is more important than environmental purity, class warfare, and de facto government takeovers of large corporations, those who have “gone Galt” might come in from the wilderness. Does anyone think that Pelosi, Obama, and Reid are up to doing what it takes to make that happen?