“Judgment to Lead” is supposedly what Democratic presidential candidate Barack Obama brings to the table. The claim, as PJM’s Pam Meister described it last month, is that “he may not have the same experience as his opponent, but he has what it takes to make the right call.”

While others search vainly for examples in Obama’s political life supporting that claim, I will describe a situation — what was has come to be known as the “Obamazebo” — where he clearly made the wrong call, demonstrated poor judgment, and utterly failed to lead. Though the amount of money involved is minor, the story is nonetheless revealing, and ultimately provides a window into Obama’s unfitness to be president.

A group of politicians, school administrators and community activists unveiled a plan Friday for a $1.1 million botanical garden in the city’s Englewood neighborhood.

The proposal calls for a walk beneath the “L” tracks on Princeton Avenue, from 59th Place to 62nd Place. Backers said they hope it will help spur redevelopment in the impoverished area, boost neighborhood pride and soften the impact of traffic and pollution from the nearby Dan Ryan Expressway.

State Sen. Barack Obama (D-Chicago) said he planned to seek state funding for the effort and estimated that ground could be broken in early 2001.

He said the park could serve as part of a new vision in the area and permit youngsters “to have open space and not always be stepping on concrete and broken glass.”

In addition to flowers and trees, the proposed park would include a gazebo, a parrot sanctuary and a walk of fame.

A July 11 Chicago Sun-Times investigative report on the project recalls that Obama promised that he would “work tirelessly in Springfield and in Chicago to raise public and private dollars to fund this worthy endeavor.”

But almost nine years later, there are no new flowers or trees. There is no parrot sanctuary (neighborhood residents who may parrot Obama’s talking points don’t count), and there is no walk of fame.

Those who view the videos accompanying the Sun-Times‘ original and September 25 reports will see that there is still a lot of concrete and trash.

There is also $100,000 of state money Obama obtained for the project that is mostly unaccounted for.

Oh, we know who got it. But for the most part, we have no idea what they did with it, with one exception — a gazebo that graphic contributor “tnculp” dubbed the Obamazebo: 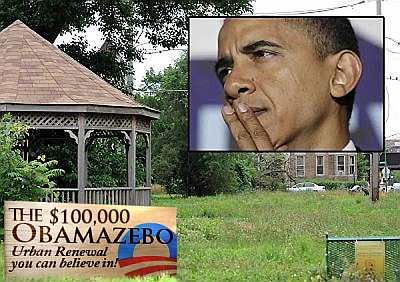 (Original photo is from AP and Chicago Sun-Times; a Google Earth screenshot of the area, with the lonely Obamazebo visible, is here.)

Kenny B. Smith Jr., to whose Chicago Better Housing Association Obama steered the grant, was an Obama campaign volunteer who also contributed $550 to Barack’s 2000 state Senate and congressional campaigns. While Smith claims to have submitted paperwork to the state supporting what his association and his wife’s construction company spent on the project (which, oddly enough, he said he didn’t have copies of), the Sun-Times could only confirm the existence of the Obamazebo plus a few thousand dollars’ worth of site clearance work by a subcontractor.

Paraphrasing what I noted in mid-July shortly after the first Sun-Times report, this episode is about a lot more than almost $100,000 virtually vanishing:

From all appearances, Obama simply got hustled at Illinois taxpayers’ expense. You have to wonder if he even looked into how the rest of the “fund-raising” was going before the grant was made.

The Obamazebo episode shows that the Democratic presidential candidate can’t even get a $100,000 grant right. And while I’m thinking of it, who in the world really believes that building a botanical garden spurs economic development? When has such a result ever occurred?

Now Obama wants to have the final say in matters relating to a $3 trillion-plus federal budget and a $14 trillion economy in a town chock full of con artists and tricksters.